Devin Cunningham, 25, has great abs. But his secret might surprise you. He says his steady diet of Chipotle, which he’s been been eating every single day for a year straight, has helped him get in prime shape. In fact, he plans to keep eating Chipotle daily for an unspecified period of time.

The Washington state resident, who works in communications and marketing, wasn’t always this obsessed with the fast-casual burrito chain, but he had seen a story about a guy who ate Chipotle straight for 186 days — and knew he could do it even longer. After all, he was already eating there three to five times a week.

There was a surprising second reason to take on the 366-day Chipotle challenge: getting fit. Two years ago he discovered the “if it fits your macros” diet, which essentially prescribes the specific amounts of carbs, protein and fat you should consume in a day. Soon after, he doubled down on working out more effectively and learning to lift weights correctly. He decided that embarking on the year of eating Chipotle would actually be a good complement to his new fitness and diet habits.

Chipotle turned out to be a good place to experiment, as it’s “pretty spot-on with portions,” he says. At one point during the challenge, when he was being so stringent about what he ate that he even had the Chipotle servers package the components of his burrito bowls separately so he could weigh everything himself.

His biggest challenge came last fall, when all his local Chipotles shut down for two weeks because of an E. Coli scare. Luckily, Cunningham lives close to the border with Canada, so he was able to drive up north twice to pick up a necessary two-week supply of burritos from Vancouver, which he kept fresh by freezing them.

And about that E. Coli issue: “That didn’t worry me at all,” he says of the potential for contamination.

Beyond the Chipotle obsession, the rest of his diet is actually pretty normal: in the morning, it’s a blueberry bagel and protein shake or parfait with nonfat Greek yogurt. For lunch, he’ll hit up Chipotle; lately he’s been going for a chicken bowl with rice and cheese on the side. And in the evening, he’ll build a protein-rich meal around chicken or a turkey burger. He says he works out about six days a week, putting in 15 to 20 minutes of cardio a few days a week, with the rest of his workouts focused on weight lifting.

He has meticulously kept track of his progress and Chipotle purchases on Instagram, where his pics seem to support his claim that yes, it’s possible to get fit on a (partially) fast food diet.

The fast-casual chain took notice of his challenge, tweeting a special acknowledgement of his accomplishment.

And even after over a whole year of dedication to the challenge, he says he has no plans to let up.

“I want to inspire people to be fit,” Cunningham explains. “When people ask me advice on what foods to eat or what workouts to do, it makes me feel awesome and it makes me feel even better when I see them follow through with their goals.”

The takeaway? Even the burrito diet is real. Now we really have no excuses. (And maybe, if you’re as dedicated as Cunningham, you’ll even get a few free meals for your efforts.) 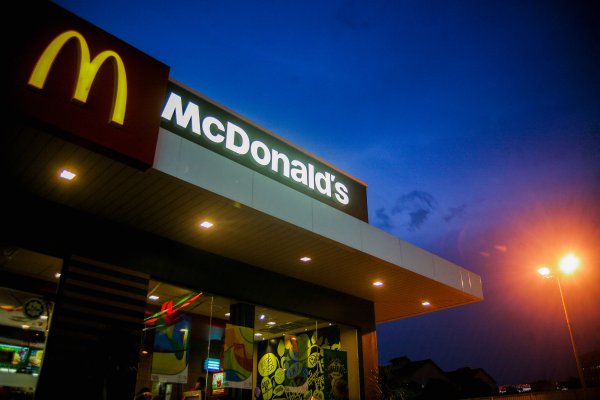 McDonald's Will Remove Some Artificial Preservatives From Its Food
Next Up: Editor's Pick