The Trouble With Time Travel in the Harry Potter Universe

Harry Potter and the Cursed Child is finally here. The script of the West End play was released July 31 at midnight — Harry’s birthday, for those who somehow do not know — giving Potterheads a new tale about the Boy Who Lived.

Written by Jack Thorne and based on a story by J.K. Rowling, Thorne and John Tiffany, the play begins 19 years after the events of The Deathly Hallows, as Albus Potter (the youngest son of Harry and Ginny) and Rose Granger-Weasely (the daughter of Ron and Hermione) head off to Hogwarts for the first time. While on the Hogwarts Express, Albus befriends Scorpius Malfoy (the son of Draco and Astoria) who informs Albus that many people believe his real father is Voldemort rather than Draco, a rumor based on the belief that someone used a Time-Turner to allow the Dark Lord to impregnate Astoria.

For those who need a quick recap, Time-Turners were first introduced in the third book of Rowling’s series, The Prisoner of Azkaban, when Hermione was given one by Professor McGonagall in order to fit extra classes into her school schedule. Hermione keeps the device a secret for most of the book before using it to send herself and Harry back in time to prevent the death of Sirius Black — a mission that proved successful.

However, the Ministry of Magic’s entire store of Time-Turners — including the one Hermione once possessed — is eventually destroyed during the Battle of the Department of Mysteries in The Order of the Phoenix.

At this point, you’re probably wondering why anyone would believe the rumor about Scorpius if the Time-Turners were truly destroyed. Well, when Theodore Nott — one of Draco’s old Slytherin cronies — is arrested during Albus and Scorpius’s third year at Hogwarts, it comes to light that he just so happens to have a functioning one in his possession.

The rest of the story develops as Albus and Scorpius steal the device from the Ministry and use it to try and prevent Cedric Diggory from being killed during the Triwizard Tournament, setting off a butterfly effect that threatens to change the course of wizarding world history.

Now, here’s where things get complicated. The characters in Harry Potter have dabbled in time travel before, but never to such a large degree. In Prisoner of Azkaban, the HP universe seems to adhere to the Novikov self-consistency principle, which states — in very broad terms — that time is a closed loop. Basically, you cannot change the past through time travel, you can only fulfill it. This is best summed up by Harry in the Prisoner of Azkaban movie when he says, “I knew I could do it this time because, well, I’d already done it,” after conjuring the Patronus that saves his past self and Sirius Black from the Dementors.

Stories that involve time travel often struggle with this point, from Back to the Future to Stephen King’s 11-22-63: You can change the past, but then everything that follows creates a universe in which the new reality seems like it was always the reality. This concept is problematic because it produces a universe in which the past is dependent on a future that is dependent on the past — i.e., Harry cannot survive unless his past self survives, but he won’t be able to travel back in time to save himself unless he originally survives.

Rowling also has both Hermione and Dumbledore emphasize the dire repercussions of allowing your past self to see you — you’ll go mad — meaning you can, in fact, disturb the closed loop and produce a scenario that doesn’t result in the creation of the present from which you originally came. This detail muddies the waters of the series’ time travel system, as it introduces questions such as, why couldn’t a Time-Turner have been used to stop Voldemort?

Essentially, without rules governing what can or cannot happen, any number of paradoxes can arise from characters’ forays into the past — people can even be “un-born.”

Rowling has since tried to explain this inconsistency by stating that the farthest a person can travel back in time without “catastrophic” consequences is five hours. In a post on Pottermore, the author wrote from the perspective of the Department of Mysteries’ Professor Saul Croaker to stress this particular point.

“As our investigations currently stand, the longest period that may be relived without the possibility of serious harm to the traveller or to time itself is around five hours,” Croaker says. “We have been able to encase single Hour-Reversal Charms, which are unstable and benefit from containment, in small, enchanted hour-glasses [Time-Turners] that may be worn around a witch or wizard’s neck and revolved according to the number of hours the user wishes to relive. All attempts to travel back further than a few hours have resulted in catastrophic harm to the witch or wizard involved.”

While the limit to the amount of time one can go back is changed to five minutes in Cursed Child, it is enforced by having characters who overstay their welcome be forced back to the present. However, the rules seem to have changed. While Rowling previously seemed to indicate that one could only reverse time five hours from the present moment without risking permanent damage, characters are now able to travel back for five minutes to any point in time.

And although Albus and Scorpius’s trips back to the Triwizard Tournament all have serious consequences, when Draco shows up with the “perfected” Time-Turner — one without the five-minute limit — near the end of the story, the whole group returns to the night Voldemort killed Harry’s parents without upsetting the course of the future in the slightest.

Now, all of this is not to say that Cursed Child isn’t a perfectly enjoyable read. In fact, the play has received rave reviews. However, some fans have expressed disappointment about the inconsistencies it introduces, saying it seems more like a fan fiction than a continuation of Rowling’s beloved series.

Basically, the moral of the story is: read at your own risk. 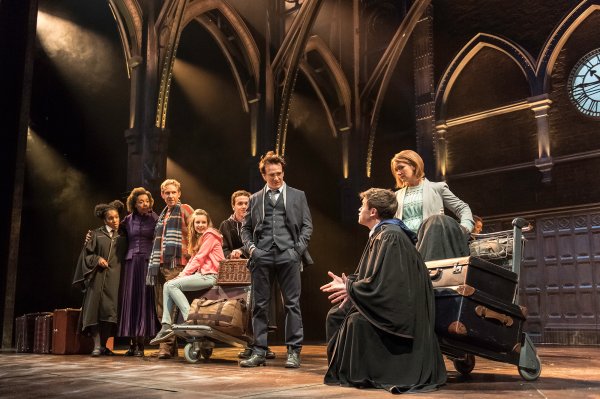 13 Familiar Characters Who Make Surprising Harry Potter and the Cursed Child Cameos
Next Up: Editor's Pick