Even If Donald Trump Loses, the Worst Is Yet to Come

Supporters of Donald Trump at the Republican National Convention on July 19, 2016, at the Quicken Loans Arena in Cleveland, Ohio.
Ben Lowy for TIME
Ideas
By Joe Rospars
Rospars is the founder and chief executive of Blue State Digital and served as Barack Obama’s principal digital strategist in 2008 and 2012.

For campaigns at every level and all the advocacy groups seeking to play a role in the election, there’s something magical about the party conventions. You see it in your data: more volunteers, more donors, more engagement. This is the time when many Americans begin to tune into the election in earnest.

This year, that worries me. Every election season has its nasty side, but when outright bigotry has been mainstreamed by one of the two major parties, that inevitable rise of activity and interest can equal many more people engaging with, accommodating, and finding ways to defend views that were previously out of bounds.

It’s hard even to take solace in the expected decisive and historic victory for Hillary Clinton.

That’s because even if Donald Trump loses badly, he’s teaching some people how to do bad things on a scale we haven’t seen in a generation. And they’re not going to forget after Election Day.

The morning after, we will be left with a large number of people who actively supported—that is, not only voted, but organized and spoke out for—an abhorrent set of views. That activity can cement and reinforce those views, and they’ll likely carry that experience for a long time after November.

As someone who has worked in campaigns, I hope that after this election, the moral stain on the politicians, staff and consultants who went along with Trump out of expedience or opportunism haunts their careers, their Google results and their eventual conversations with their grandchildren who read about what happened back in 2016.

But I’m more deeply concerned and fearful about what happens to the inevitable wave of people on the right-leaning side of the political spectrum whose political awakening or deeper engagement in the political process is increasing as we get closer to the general election.

The question that will be nagging me for the next three months is not about victory alone.

The Clinton campaign has history, demographics, a talented team and a deeply flawed opponent all working in its favor. She and they could do everything wrong and still have a very strong chance of winning—and they will do many things right.

The question that goes beyond just securing a win is twofold: First, how to inoculate good people from getting caught up in the sickness of xenophobia, racism and authoritarianism? And second, what to do to re-marginalize the fringe ideas Trump will have put squarely at the center of American political life?

These aren’t easy questions. Even after Trump has left the stage, one way or another, people who have taken up his causes will tell themselves that they lost because he was a flawed candidate, or that the Voter Fraud Fairy stole the election again and that they really are part of a “silent majority.”

And, unfortunately, the electoral map going forward may stoke this narrative for them. Even if the Democrats take back the Senate (likely) and the House (less likely, but possible in a Trump wipeout), prospects for 2018 look abysmal. In other words, in what would be President Hillary Clinton’s first midterm election, the peculiarities of the electoral map combined with low off-year turnout could manufacture the triumph of Trumpism, just without Trump.

The worst part is that the midterm elections will be when we’ll be beginning another presidential election cycle. And what model will a candidate wanting to decisively win the Republican nomination seek to emulate in that primary? Exactly. We just may wind up right back where we are today, except with a bigger base of Trumpists led by a more wily and effective non-Trump candidate.

Perhaps a strong Democratic Congress and a few Clinton-appointed Supreme Court justices can upend some of the broken aspects of our elections—barriers to voting, gerrymandered districts, big money buying lackeys and fueling ideologues—in a way that alters this course.

But as tens of millions more Americans tune into the 2016 campaign, all of the drama and tumult of this general election may, in the long view, be less culmination of everything we’ve seen so far, but rather the beginning of something else.

As a Democrat, I’m confident our nominee and our allies will manage the influx of interested voters well and maximize our organizational advantages in technology, data and grassroots mobilization.

But, weirdly, I’m more concerned about how the Republicans will handle the wave of people about to encounter their nominee, their party and the American political culture in its current state.

It’s a strange feeling to be pretty confident you’ll go to sleep happy on election night, while also deeply worried about what you’ll wake up to the next morning. 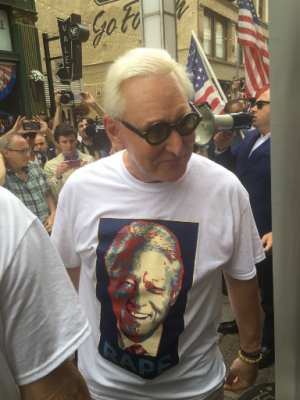 Roger Stone Just Showed Up to the RNC in a Bill Clinton 'RAPE' T-Shirt
Next Up: Editor's Pick