Why Donald Trump's Speech at the Republican Convention Was Historic

Republican U.S. presidential candidate Donald Trump was on stage at Monday's opening session of the Republican National Convention in Cleveland.
Rick Wilking—Reuters
By Will Drabold

When he took the stage in Cleveland Thursday, Donald Trump was the first major-party nominee since at least 1960 to speak for the first time at a national convention, according to a TIME review of past convention speeches.

Typically, modern major party nominees have been on the convention stage before in at least a small role, often selected in part because they were rising stars or runners-up in that year’s primary fight.

Trump was supposed to do a “surprise” publicity stunt at the 2012 convention, but it was canceled when a tropical storm hit Tampa.

These earlier convention speeches have even launched careers. In 2004, Illinois Senate candidate Barack Obama rocketed to national fame after a well-received speech at the Democratic national convention. Four years later, he was the party’s nominee.

Even poorly reviewed speeches, such as then-Arkansas Gov. Bill Clinton’s famously meandering address in 1988, have been clues to future nominations.

Other nominees have been onstage because of their close ties to a prior administration, such as Vice Presidents Al Gore, George H.W. Bush and Walter Mondale, or family ties, such as George W. Bush, who spoke on his father’s behalf.

But some nominees are veterans of the convention stage.

Arizona Sen. John McCain spoke at five conventions—1988, 1992, 1996, 2000 and 2004—before accepting the party’s nomination in 2008. He even made a return appearance in 2012, though facing a tough re-election campaign complicated by disapproval of Trump in his home state, he will not speak at this year’s convention.

Then-Massachusetts Gov. Michael Dukakis spoke at the 1976 Democratic convention and again at the 1984 convention, though “it was pretty late at night!” he told TIME in an email. Dukakis was nominated in 1988.

Trump’s rival, Hillary Clinton, spoke for her husband twice before taking the stage as a politician in her own right in 2000, 2004 and 2008. (She skipped the 2012 convention because the Secretary of State typically stays away from domestic politics.)

If recent history is a guide, delegates at this year’s convention may even get a sneak peek at their party’s nominee in 2020 or 2024. 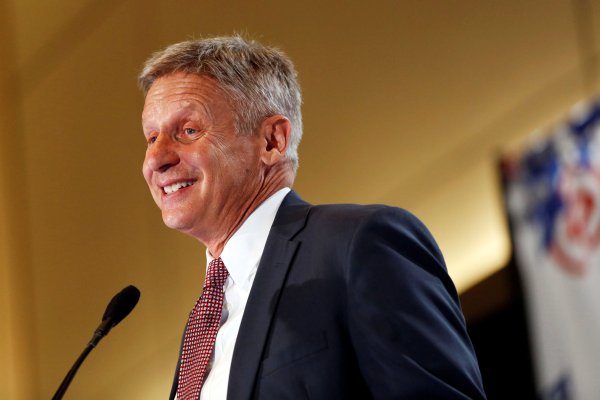 Libertarian Gary Johnson Feels the Love in Cleveland
Next Up: Editor's Pick