Greg Heartsill told his friends and neighbors he supported Sen. Ted Cruz’s presidential bid, advising the Iowa campaign and running to be one of his delegates to the Republicans’ nominating convention. The state representative helped Cruz win a narrow victory in Iowa’s leadoff caucuses back in February, and arrived in Cleveland as a delegate this week.

So it was only slightly awkward when the Columbia, Iowa, resident joined the rest of Iowa’s delegation in giving their support to Donald Trump, his party’s nominee. Party unity matters still for his state, and the delegation rallied around the eventual victor under state party rules. “People need to realize this is a binary choice. You only have two choices,” Heartsill said on Wednesday even as he was eager to hear Cruz address the convention. “Hillary Clinton would be a third term for Barack Obama, and we can’t have that. That’s the only choice that matters.”

So went much of the chatter in Cleveland this week. Clinton’s name was often spoken more than Trump’s—in speeches from the podium and in conversations with party activists here. Trump is an imperfect vessel for the GOP and its orthodoxy, but he’s the party’s best tool to keep Clinton out of the White House. Selling Trump’s candidacy was less of the goal than tearing down Clinton’s.

On the floor Wednesday night, aides passed out signs that proclaimed “America deserves better than Hillary.” “We need a businessman, not a Hillary-crat,” small businesswoman Michelle Van Etten said. Kentucky state Sen. Ralph Alvarado criticized “the President and his apprentice Hillary Clinton” and acknowledged the difficult choice: “Do you want someone who is brutally honest, perhaps to a fault, or somebody who is brutally dishonest?”

So it continued through the third night of this convention, with Vice Presidential nominee Mike Pence joining the pile-on as he officially joined the ticket. “Let’s resolve here and now that Hillary Clinton will never become President of the United States of America,” Pence said, earning some of his biggest applause of the night.

The rhetoric found welcome ears in the hall. “It’s necessary,” Theresa Peel said of the anti-Clinton messaging. “I was not fully informed just how bad she was,” the Waxahachie, Texas, woman said. For those like her, the innuendo of Clinton’s dodgy behavior is a better motivator to back Republicans than anything that can be said about Trump.

The delegates spoke not just of opposing their rival, but of jailing her. “Hillary Clinton is the ultimate Washington liberal inside. If she were any more on the inside, she would be in prison,” Wisconsin Gov. Scott Walker roared, drawing the crowd to its feet. “That is why we need to support Donald Trump and Mike Pence.”

Seldom were speakers giving specific reasons to back Trump. Cruz spoke Trump’s name just once as he addressed the crowd, never endorsing a rival who suggested Rafael Cruz had a tie to assassination of John F. Kennedy. “Don’t stay home in November,” Cruz extolled delegates. “Vote your conscience.” Thousands of delegates roared into boos as Cruz wrapped up his speech, which veered off-script and ended without an endorsement. It was merely the latest reminder that Trump is the party’s nominee, not the party’s leader.

Instead, the bulk of the speakers seemed determined to make people vote against Clinton. “A vote for anyone other than Donald Trump in November is a vote for Hillary Clinton,” Walker said. It’s hardly the uplifting message of Ronald Reagan’s “Morning in America” or Barack Obama’s “Hope and Change.” Even Clinton’s slogan these days, “Stronger Together,” carries a warmer tone.

“The time for fighting each other is over. It’s time to come together and fight for a new direction for our country,” Marco Rubio said in a video message to delegates. He did not attend the convention of his one-time rival, but he summed up how many of these delegates were feeling. 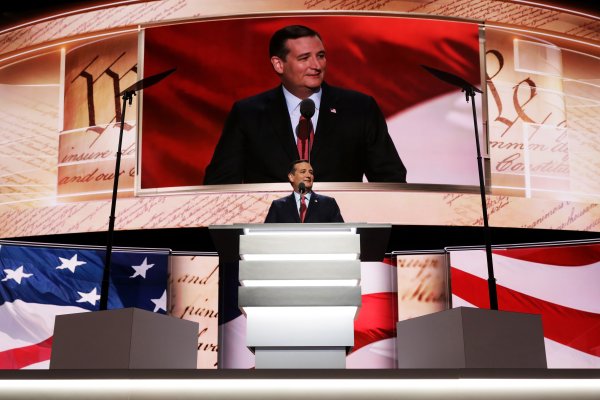 Watch Cruz Fail to Endorse Trump at the Republican Convention
Next Up: Editor's Pick