Inside Airbnb's Plan to Build a Grassroots Political Movement

The future of Airbnb’s political strategy rests on the shoulders of men like Peter Kwan.

A retired law professor who lives in San Francisco’s North Beach neighborhood, Kwan founded what one Airbnb insider called the “Adam and Eve” of home-sharing clubs, organizing fellow hosts to go door-knocking during political battles and on whitewater rafting trips in the off-season.

In the past year, such clubs have become the focus of a political strategy that the $24 billion company is pushing around the world. And on Thursday, the company plans to announce in a new report the progress their team has made so far on the stated goal of establishing such clubs in 100 cities by the end of this year. At mid-year, more than 60 have been established, from Maui to Mexico City, and the company believes they’ll meet their aim.

“We decided to replicate what we had in San Francisco, which is to put on the ground, in a global way, a mobilization effort,” says Chris Lehane, a seasoned Democratic operative who was hired nearly a year ago to head the company’s growing policy team. “It’s something I’ve never really seen a company do.” By that, he means his company is spawning a true grassroots political movement.

Though the company likes to emphasize that there’s a strong “organic” element to the clubs—and can point to the likes of Kwan, who set up his independently—Airbnb has invested heavily in catalyzing these bands of citizens who will show up and fight for homesharing-friendly regulations at city halls and state capitols. Modeling their strategy on the data-driven one used by Obama’s presidential campaigns, particularly in his 2012 reelection, the company has hired nearly 100 “mobilization team members” and two dozen people focused on “digital engagement.” To that end, Airbnb also plans on Thursday to unveil a hub for clubs where hosts can connect, publish mission statements, plan meetings and so forth.

There is a reason for the investment. For years the company has waged local battles with regulators concerned about housing and oversight, but as Airbnb has grown, so have its political problems. Hotel lobbyists are increasingly focused on a major competitor that is now valued at more than the Marriott. In mid-July, three U.S. senators wrote a letter to the Federal Trade Commission, asking the agency to investigate the “rapidly expanding short-term lodging rental market” and whether companies such as Airbnb, VRBO, Homeaway and Flipkey might be “exacerbating housing shortages and driving up the cost of housing in our communities.” And while the company has been working out compromises in places like Chicago, it remains so at odds with some San Francisco lawmakers that Airbnb filed its first-ever lawsuit in federal court over local regulations. (It remains pending.)

The club strategy, says Columbia Business School associate professor Evan Rawley, is a “smart move” that highlights the benefits Airbnb brings to dense urban centers, where critics have decried the negative impacts home-sharing platforms can have on housing stock. “What the opponents of Airbnb are saying is that capitalists are pushing out renters, and they’re turning the places that would have been rented out at reasonable prices into, basically, hotels,” says Rawley, who specializes in corporate strategy. “Airbnb is meanwhile saying most people are just using this as a way to pay their rent. ‘We’re not actually upending communities, we’re building communities.’ And both things can be true.”

Fostering visible clubs full of what Lehane calls “real people” puts many middle-class moms and pops in the spotlight and helps galvanize voters that Airbnb knows are statistically much more likely to support their positions.

The test case came last year when a ballot measure known as Prop F was up for a vote in San Francisco. Local lawmakers had gone through an arduous process of legalizing short-term rentals—like many cities where rental housing is limited and rent-controlled, rentals for fewer than 30 days had been illegal—and the law had gone to effect in February.

But some progressives on the city’s Board of Supervisors weren’t happy, arguing that only a small percentage of hosts were actually registering with the city as the law required. A small amount of bad actors, like landlords who evict people to lend out their places to tourists full-time, also stoked backlash against Airbnb, especially amidst the city’s housing affordability crisis.

Supervisor David Campos, who supported Prop F and has continued to support tighter restrictions on short-term rentals, continues that line of criticism. Airbnb “didn’t create the housing crisis,” he says, “but they are making it worse.”

Among other things, the proposition would have limited the number of days a host could rent out a listing to 75 per year, strengthened enforcement mechanisms and given neighbors incentives to sue violators. In gearing up for the fight, Lehane says the company looked at their internal data and found that they had about 150,000 people in the city—compared to 6.5 million in the United States—who had either been hosts or guests. Additional polling found that such people were “overwhelmingly” more likely to support Airbnb’s position, he says. So while the company spent $8 million on the campaign, Lehane says the most effective efforts were targeting hosts like Kwan, who in turn organized many more. Airbnb would largely bankroll the infrastructure for a phone bank, for instance, and members of the homesharing club would show up to evangelize with the verve of the already converted.

Unlike an Uber driver who might be bitter when the company changes the rates per mile, which is out of their control, or be constantly upset that the company takes 20% off the top, hosts are getting “97 cents on the dollar” for prices that they set, Lehane says. That revenue split, and the economic incentive it represents, has made many hosts loyal. “Because of rising prices of housing, homeowners and tenants have been extremely stressed in being able to afford their homes,” Kwan says, “and home-sharing and Airbnb have been a lifeline.”

A TIME poll on the gig economy, conducted by Penn Schoen Berland in partnership with Burson-Marsteller and the Aspen Institute, found that more than half of people (56%) who had made money through home-sharing said that Airbnb is different from hotels and vacation rentals and should not be subject to the same regulations. And home-sharers were significantly more optimistic about their financial situation than the general population, with 63% (compared to 47%) saying they believed it would get better in the next year.

In the end, the San Francisco measure to restrict Airbnb was defeated 55% to 45%. “Coming out of that, the light bulb went on over our head,” says Lehane. “There’s a huge community here that is passionate, that’s inspired … and has an awful lot of economic self-interest tied into it.”

The company’s increasing emphasis on getting hosts to hearing rooms and polling booths is proof that disruptive peer-to-peer unicorns are maturing, staffing up to deal with all the lobbying and politics that comes with being major players in the economy.

Lehane admits that the company hasn’t “been perfect” in the past. In the run up to the vote on Prop F in San Francisco, the company was forced to apologize for ads that that essentially bragged about how much Airbnb had collected in hotel taxes and suggested what the city should do with all that money.

In the early days, Airbnb “often started with the position that the laws don’t fit,” says Arun Sundararajan, a business professor at NYU, who has studied the company. “That’s a less sophisticated position to start from, as opposed to saying … ‘Let’s go two steps further and provide a template for something that’s politically workable.’”

These days Airbnb is working a lot harder on finding common ground with local lawmakers and hashing out new schemes. San Francisco Supervisor Campos finds it silly that the company still brags about paying their taxes—“That just shows you the arrogance … It’s part of being an American citizen”—but Airbnb has made a big policy change in that area, collecting hotel taxes in nearly 200 jurisdictions and trying to do so in more. It’s not only a good-faith gesture but helps assuage allegations hotel associations might make that the competitive playing field is not level, says Columbia’s Rawley.

And while Airbnb is still fighting San Francisco over exactly how much responsibility it has to take for what hosts do on its platform, it has also been working on a “one host, one home” effort to help root out people who use the site to run listings that aren’t their personal homes. So far, Airbnb says, the company has removed 200 listings that appear to violate the new policy in San Francisco and about 2,200 in New York City—a tacit acknowledgement by the company that it should do at least some amount of enforcement.

Airbnb’s cooperation extends to its data, which it once guarded ferociously. The company now shares anonymized information with cities like San Francisco about activity that’s taking place on the platform. “We’ve learned a lot,” says Lehane. “A big part of the learning has been that we have to own some of providing those solutions to cities so we can help give them the tools and give them the information, give them the ability to get to policy results that I think we all collectively agree make sense.”

Campos is critical of the homesharing club pitch, saying the campaign glosses over Airbnb’s problems. “It’s not realistic,” he says. “It’s not representative of what actually happens.” To be sure, the new report on home-sharing clubs does not contain any anecdotes about greedy landlords but there is also a community to tout. In addition to numbers meant to show the strength of their army—that, for example, the equivalent of nearly one-quarter of Paris’ population has been a host or guest on the platform—are tales of volunteer outings and hosts helping other hosts learn how to abide by local registration processes.

While animosity against Airbnb remains in some cities where housing is scarce, the club strategy is all about wielding the fact that people like Kwan see home-sharing as not just a hobby or side gig, but part of their identity and social life. “I really get a lot of joy out of home-sharing,” says the 55-year-old who taught law at Santa Clara University. “Hospitality is something which I didn’t think I would love, but actually I do.” 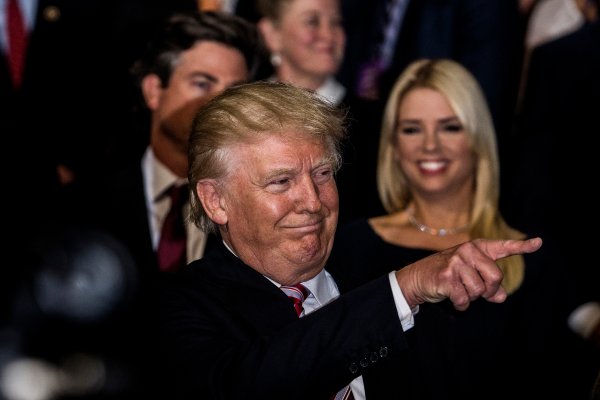 Donald Trump Is So Wrong About NATO
Next Up: Editor's Pick