Meet the Celebrities Going to the Democratic National Convention

The Republican National Convention in Cleveland, Ohio has been taking up a lot of attention this week, but the action will soon head to Philadelphia, Pennsylvania.

Next week, the City of Brotherly Love will host the Democratic National Convention, where presumptive Democratic nominee Hillary Clinton will make her title official. Many celebrities, some who stumped for Clinton, are expected to be there. Following a speaker lineup made up of athletes and actors at the RNC, it is unsurprising the DNC will include buzz-worthy names as well, especially when some of them can help Clinton appeal to younger voters.

Here are just some of the famous names that plan to attend the DNC.

The actress, best known for her role as Grace in “Will & Grace,” announced she is heading to Philadelphia for the DNC. Messing has previously gotten into Twitter feuds with Bernie Sanders supporters unwilling to fall in line and support Clinton.

The actress and model posted she will be speaking at the DNC on Wednesday. She’s known for her roles in “Kick-Ass” and “The Amityville Horror.” She supported Clinton through the California primaries, posting a photo of them together with donuts, urging voters to vote for Clinton.

A hit among younger voters since many of them have known her since her Disney “Camp Rock” days, Lovato is now grown up and staying active with a successful career in music. She’s known for songs including “Cool for the Summer” and “Heart Attack.” Lovato has previously campaigned with Clinton.

Fergie will headline a charity benefit show in Philadelphia during the convention. The Black Eyed Peas artist is known for hits like “Fergalicious.”

America Ferrera, known for roles from “The Sisterhood of the Traveling Pants” and “Ugly Betty,” will be speaking at the DNC alongside Lena Dunham, an actress from HBO’s “Girls,” Ferrera said in an Instagram post.

The “Desperate Housewives” actress will also be attending the DNC in Philadelphia. The TV star has spoken out to say she is a Clinton supporter because she believes she is the most qualified candidate in the running.

The rapper will be performing at a concert following the final night of the DNC, but he has been a consistent Clinton supporter. He announced his support less than a month after Clinton announced she was running for president.

Lady Gaga will also be performing at a Camden, New Jersey concert across the river from the DNC. Known for her erratic fashion, she has also been a longtime Clinton supporter. The Huffington Post reported Clinton also praised Lady Gaga in the past.

The Broadway star, known for her roles in “Wicked” and “Rent” as well as providing the voice in “Let it Go” from Frozen, will be performing at women’s luncheon with Cyndi Lauper. Menzel has a history of supporting Clinton. 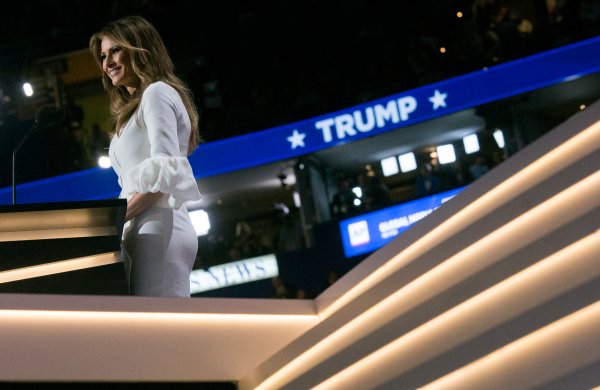 The Evolution of Trump Campaign Responses to Melania Trump's Plagiarized Speech
Next Up: Editor's Pick