7 Times Martha Stewart Confirmed She Is Living Her Best Life

It’s already a well-established fact that Martha Stewart is the Domestic Goddess and a bona fide shade queen, but did you know that Martha is basically living the dream? Yes’s had her share of controversies, including spending nearly five months in prison for lying to federal investigators over a stock sale and a media empire that has seen its shares of ups and downs. Now, at age of 74, Martha is thriving — mostly in part, because she does what she wants. Telling Kardashian BFF Jonathan Cheban that he’s not a noteworthy celebrity? Yup. Pouring out wine on the street just so she can take the glasses home? You bet. Casually hanging out with the likes of Snoop Dogg and Usher? Why not? See seven times Martha Stewart confirmed she is living her best life below.

1. Martha is open to new experiences and documents them accordingly: Is there anything that Stewart can’t do? While we’re well-acquainted with her ability to make a fantastic floral arrangement or prepare a branzino correctly, she is also adept at trying new things and making it seem effortless. To wit, this is Stewart gamely trying a hoverboard.

2. She has no time for what other people think of her: According to a Page Six report, at the New York premiere of her new movie, Bad Moms, Stewart grabbed two of the souvenir wine glasses full of wine and left the event, pouring out the wine before getting into her ride. Her rep later clarified that if there had been empty glasses, she would have taken those, but honestly, would that have been as epic?

3. Martha has the kind of behind-the-scenes interactions that would give anyone FOMO: Martha Stewart hangs out with tons of celebrities, but she’s hardly star-struck by them; instead, she uses her great access to bless us with things like this very close-range Instagram shot of Kanye West flashing a rare smile. The photo shows him covered in chalk because she took the picture after West performed a 20-minute set at the 2015 TIME 100 gala. It gets even more relevant. Not only did she hang with the hip-hop icon, who was a TIME 100 cover star himself, Stewart also wrote a TIME 100 tribute to Kim Kardashian West, writing “Kim exudes energy, sexuality, drama, determination, impetuousness and happiness.”

4. She has a myriad of very cool, very hip colleagues: Everyone from Snoop Dogg to Usher has visited Martha Stewart HQ to talk shop with Martha.

5. She’s not afraid to say it like it is: Just like her inability to be ruffled by fame, Martha also knows a celebrity imposter when she sees one. Take for example, the time she was on a yacht with Jonathan Cheban and asked her Twitter followers as to whether or not he was famous, going so far as to tweet “Do you know who this guy? He says he is well-known.”

Martha later discovered that he was the BFF of the Kardashians.

6. Even Martha’s dogs are cooler than yours: Meet her Chow Chows, Genghis Khan and Peluche and her Frenchies, Sharkey and Francesca.

7. Even her hobbies are somehow A1: Exhibit A? Watercolor painting with photographer Terry Richardson over Thanksgiving. 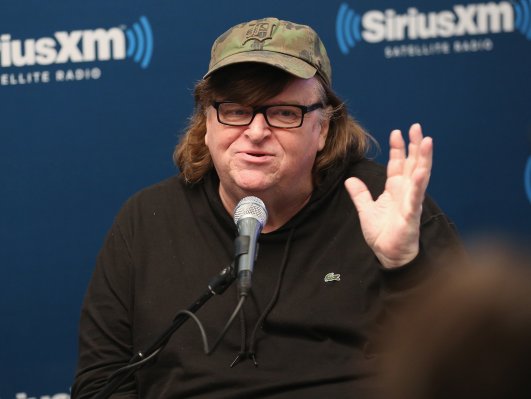 Michael Moore: 'I Think Trump Is Going to Win. I'm Sorry'
Next Up: Editor's Pick