Ruby Rose and Khloé Kardashian are doing their part to reduce celebrity drama this week by shutting down a beef stemming from the already volatile situation of the Taylor Swift/Kanye West/Kim Kardashian West feud.

In case you were mercifully, blissfully unaware of the high volume of celebrity drama this week, allow us to brief you as quickly as possible.

The long-standing feud between Taylor Swift and Kanye West peaked in February when the rapper released his song, “Famous” (that just happens to reference Tay in the lyrics, “I feel like me and Taylor might still have sex/Why? I made that b–h famous”). Swift’s people said she had never approved the song, while West took to Twitter to say that they had had an hour-long phone convo about it.

One scathing Grammy speech by T. Swift, a tell-all GQ interview with Kim Kardashian West and a very NSFW (read: NAKED) music video featuring the likeness of Taylor Swift, among others, for “Famous” later, and a new sub-feud was created by one Kimberly Noel Kardashian West who produced the receipts via Snapchat video on Sunday night that Taylor did, in fact, talk to Kanye about “Famous.” As expected, the Internet exploded over the revelation, and in its wake, celebrities of varying fame aligned themselves with Team Taylor and Team Kim.

Which finally brings us to our original point of discussion: Ruby Rose and Khloé Kardashian. Blood is thicker than water and no one stans harder for her family than Khloé, so you just know that Khloe was just waiting for a beef to land in her lap after #KimExposedTaylorParty. Ruby Rose is a prominent member of the Taylor Swift Friendship Industrial Complex, otherwise known as the “Squad,” but while she did not explicitly come to her girl’s defense, she did defend Chloe Grace Moretz, who though not a squad member, is the pint-size nemesis of Kardashian West and thus a straight ringer for defending Taylor Swift.

Chloe sent this (unsolicited) sub-tweet about Kim and Taylor.

And Khloé responded as only Khloé could (or would,) with a questionable tweet that included an explicit photo that Moretz later pointed out wasn’t even her.

At which point, Ruby Rose took time from her busy DJ-ing schedule to rise up and give her (also unsolicited) two cents.

Then Ruby Rose posted this.

Of course, this kind of response was just begging for a beef, the proportions of which could honestly have rivaled the Khloé vs. Amber Rose Twitter clapback of 2015 or even the Kanye vs. Wiz Khalifa/the World beef of 2016, but Ruby Rose apparently squashed any chance of that happening.

The Orange Is The New Black star tweeted once again, proselytizing her kumbaya gospel, stating that beef would not be on the menu because she and Khloé “spoke because that’s what adults do…and took the time to understand and [sic] except our different views on some matters.”

So there’s that. One less celebrity feud in the world, thanks to Ruby Rose. 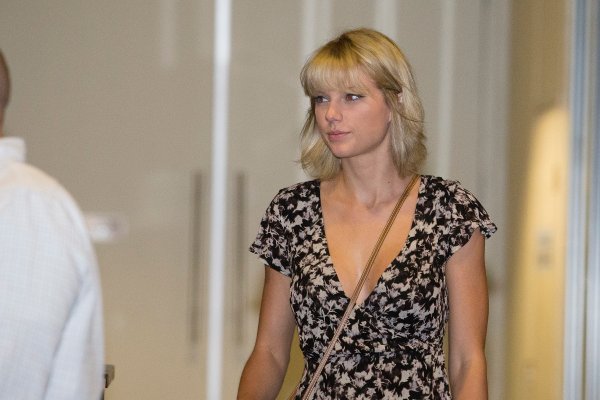 Taylor Swift Once Admitted She's Terrified of Being Secretly Recorded
Next Up: Editor's Pick