The chants that got the Republican convention crowd going Tuesday night had nothing to do with newly-crowned nominee Donald Trump. “Lock her up!” the delegates chanted. “Guilty,” they screamed. Their focus was on Hillary Clinton, an opponent who former candidate Ben Carson even associated with Lucifer.

Trump may have officially won the GOP nomination Tuesday night, but the party isn’t yet ready to fully embrace its bombastic nominee. Compared to recent conventions, the arena was muted much of the night. An hour before the program ended, the crowd began to thin out. When Senate Majority Leader Mitch McConnell rose to speak, he heard boos.

But at least there was Clinton. With the general election offering the two most unlikable presidential candidates in recent history, this year’s political conventions are set to be defined by polemics against the opposing party and saccharine appeals for unity. There may have been rousing testimonials from Trump’s son and daughter, but they were interludes. On the night featuring the largest collection of Republican elected officials set to address the convention, it was clear that they are still struggling with how back their bombastic nominee.

New Jersey Gov. Chris Christie, who was nearly selected as Trump’s running mate, did effusively acclaim his friend of 14 years. But many of his fellow politicians, who have had to answer for Trump’s fusillades at minority groups and his political opponents, shied away from offering direct praise. McConnell offered little praise of Trump, instead merely stating that he, unlike Clinton or President Barack Obama, would sign his caucus’ legislation.

Chris Christie on the floor of the 2016 Republican National Convention on Monday, July 18, 2016, in Cleveland.
Landon Nordeman for TIME

Speaker of the House Paul Ryan mentioned Trump just twice, devoting his remarks to offering his vision of a growing Republican Party that contrasts with Trump’s. “Let’s take the fight to our opponents with better ideas,” Ryan said. “Let’s get on the offensive and let’s stay there.” Likewise, House Majority Leader Kevin McCarthy’s invective against Democrats included only a token mention to Trump after calling for the re-election of the House majority.

The lawmakers were, however, united in their critique of Clinton, from her use of a private email server while at the Department of State to a series of foreign policy missteps. “Are we willing to elect as president somebody who has as their role model somebody who acknowledges Lucifer,” Carson said, as the crowd cheered, after describing the epigraph for a 1972 edition of a book by Saul Alinsky, an activist who both Clinton and current President Barack Obama once studied.

On Wednesday, the party’s internal struggle will continue, as Sen. Ted Cruz, who has yet to endorse Trump, is set to take the stage. An outspoken Clinton critic, he is expected to focus his remarks on criticism of her, over praise for Trump, with whom he repeatedly sparred in the GOP primary on deeply personal terms. 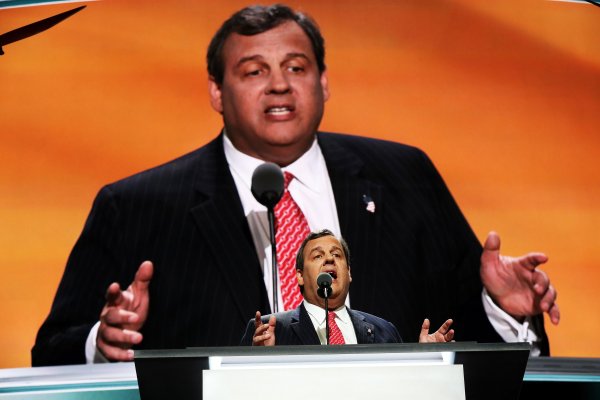