Republican pollster Kellyanne Conway has long lamented the Republican Party’s deficiencies with female voters. She has exhorted GOP leaders for years that “it’s not a special interest group when women make up more than half the electorate,” and she co-authored a book with Democratic pollster Celinda Lake in 2005 entitled: What Women Really Want: How American Women Are Quietly Erasing Political, Racial, Class, and Religious Lines to Change the Way We Live.

So how is she finding her newest job working for the GOP presumptive nominee Donald Trump, who has a notoriously fraught relationship with women and women voters? Just great, thanks.

“There’s no question” that Donald Trump would be better for American women than Hillary Clinton, Conway tells TIME in an interview. Clinton “runs around saying, ‘I’ll be the first female president.’ Why isn’t she at 70 percent amongst women? She’s nowhere near there and you know why? It’s because women say, ‘You share my gender, that’s really fascinating, that’s kind of cool, but do you share my vision, do you share my values?’”

Trump, who has gotten in trouble for sexist statements about Clinton, Fox News anchor Megyn Kelly, former rival Carly Fiorina and Heidi Cruz, the wife of another former rival Ted Cruz, has struggled in general election polls amongst female voters, consistently trailing Clinton, the first female nominee of a major party. Since the 1988 presidential election, female voters have swung increasingly Democratic. In order to win the White House, Republican nominees have had to limit the loss of female voters to Democrats to less than 10 percentage points. Trump has consistently trailed well beyond 10 points amongst female voters in most polls.

“You see a real crystallizing of Republican women and independent women are more going his way,” she says, though she grants that he’s unlikely to gain in national polls. She cites Trump’s improved messaging “on showing compassion” in the wake of recent attacks, including the Orlando attack, the shooting of two unarmed African American men by police caught on video in mid-July and the killing of five Dallas police officers at a Black Lives Matter rally.

Trump, she noted, canceled his campaign schedule while Clinton continued to stump. But she believes that Trump’s appeal is broader than dissatisfaction with Clinton. “I think that when people take the full measure of the man,” Conway says, “they’ll see that Donald Trump has continually hired and promoted women in [the construction] industry that didn’t have women participating in it higher up in the 1970s and ’80s.”

Conway says that Trump’s decisive and forceful personality appeals to women, which Clinton is, by her own admission, not a “natural politician,” who is often overshadowed by her husband and President Barack Obama.

“She struggles with millenial women. She struggles with her own party,” Conway says. Clinton, she adds, has runs tens of millions of dollars worth of television ads versus zero from the Trump campaign and thus far those ads have not seemed to make much of an impact.

Conway argues that Clinton is out of touch because she hasn’t driven a car or cooked her own food or written her own speeches in decades. When asked if Trump, a billionaire, was any more in touch with the people, Conway says: “Donald Trump embraces his wealth. Hillary Clinton wants us to forget that she made $21.5 million on 92 speeches.”

Change, Conway says, is important and Trump represents the same spirit of change that Bill Clinton did in 1992 and Obama did in 2008. “2016 is a change election and that favors Trump,” she says. Whether that remains a persuasive case for female voters remains to be seen. 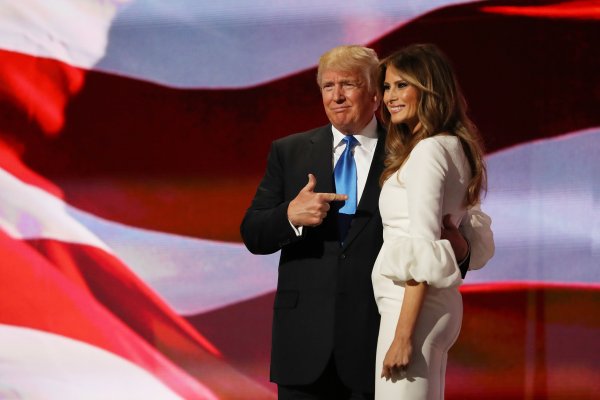 How Trump Points at His Friends
Next Up: Editor's Pick