Mike Birbiglia Wants to Trick You, Then Make You Cry

Mike Birbiglia didn’t just want to make a movie. He wanted to make a movie that people would watch and rewatch, laugh about and cry about and return to again and again for decades. With Don’t Think Twice, which hits theaters Friday, he’s not entirely sure if he’s done it, but he’s hopeful. And he’s sure he couldn’t have made it happen without his co-stars or his cinematographer or the craft services team.

Birbiglia’s appreciation for all the people it took to make Don’t Think Twice is more than faux-humility. In fact, it echoes one of the very themes of the film, which takes place in the heart of New York City’s improv scene: it’s all about the group. This rule, along with two others—say yes and don’t think—are the cardinal rules of improvisational comedy, and for the members of Don’t Think Twice‘s fictional troupe the Commune, they prove difficult to follow when one member (Keegan-Michael Key of Key and Peele) lands on an SNL-type sketch show, leaving the others to face their own feelings of resentment and insecurity.

The film is Birbiglia’s second, a follow-up to 2012’s Sleepwalk With Me; it rounds up an all-star comedy cast including Gillian Jacobs (Love), Kate Micucci (Garfunkel and Oates), Chris Gethard (Broad City) and Tami Sagher (Inside Amy Schumer). It examines what it means to realize you may not achieve your dreams, and while it appears that Birbiglia is on track with his own, success feels slippery to him even at this juncture. “People a lot of times think, ‘Well, you’re successful,'” he says. “And I’m like, yeah, today, maybe not in three months, maybe not in five years. You don’t know how long what you’re doing is going to connect with people.”

Birbiglia talked to TIME about how to keep that connection alive and why he thinks it’s cool to trick people into feeling all the feels.

TIME: With Sleepwalk With Me, you adapted a stage performance into a film. Did you know from the start that Don’t Think Twice would be a movie?

Mike Birbiglia: Yeah. It was based on this observation my wife made one night when she came to see my improv group. I do a show at UCB called “Mike Birbiglia’s Dream.” It’s a swing group of players, kind of an all-star lineup any given week, and my wife goes, “It’s so interesting that that person’s on SNL and that person is a movie star and that person is living on an air mattress in Queens.” It just hit me really hard. I thought, that’s a Big Chill-style movie set in the world of improv, where people are kind of figuring out, “What do I do next?”

How autobiographical is it?

Everything’s autobiographical, even when it’s not. This is technically pure fiction. The parts of it that are drawn from my life are the feelings—the feelings of jealousy, the feelings of resentment, the feelings of failure. When I was a kid, I had older siblings who would always get the biggest slice of pizza or the nicest toy or the better bike, and I remember saying to my mom so many times, “It’s not fair!” And my mom would say, “Nothing’s fair.” In some ways, it’s so harsh, and in some ways, it’s so wise. I appreciate my parents for being honest with me.

Do you think the comedy world is a meritocracy?

Michael Lewis, who wrote Liar’s Poker and The Big Short, has a commencement speech at Princeton. It’s so brilliant—people should watch it. He basically says, “You are so lucky to be here at all, and don’t think that you deserve that. You need to go into the world knowing that you owe the world for getting you to where you are to receive this education.” I feel like I carry a lot of that with me, like I don’t deserve what I’ve gotten, so I need to work harder to earn the attention of people who come to my films or my one-person shows. I really feel an obligation to people.

Is there a little bit of you divvied up across the characters?

Yeah. The character I want to be is Sam [Jacobs], the character who has full integrity and is all about the art. The character I fear I am is Jack [Key], who is ambitious and winning at all costs. The character I’m embarrassed to have days like is Miles [Birbiglia], being bitter. In some ways I have the entitlement of Lindsay [Sagher], the sadness of Bill [Gethard], the inability to finish projects of Allison [Micucci]. You sprinkle a piece of yourself and then a lot of it comes from your imagination.

A lot of people say that everyone should do improv—it’s good for confidence, creativity, etc. Do you agree?

I think there’s some truth to that. I think the principles of it taught me to direct a movie. When I was 18, I was cast in an improv group. When you’re young and impressionable, it imprints this idea on you of “Listen more than you talk,” and “Yes and…” people’s ideas, and it’s all about the power of what a group of people can make together. We tried to make a movie that people are going to watch in 20 years, the way we watch The Big Chill, the way we watch Hannah and Her Sisters. I think we might have done it. I don’t know, nobody knows. But I feel like we have a shot, and if it weren’t for Joe Anderson, the cinematographer, it might not be that way. If it weren’t for Gillian and Keegan giving everything, it might not be that.

Was there any improv in making the movie?

It’s surprisingly written for a movie about improv, in the sense that I wrote 12 or 13 drafts over the course of 18 months. The improv is the seasoning of the film, but it’s not the meat and the bones.

Is it harder to do improv when there’s a camera rolling?

I think so, but that’s part of the reason why we wanted to shoot all the improv scenes in steady-cam, to give the feeling of what it’s like to be onstage. We wanted to shoot it more like a dance scene or a fight scene. I tried to foster an experience on set that we’re always rolling. I think it was Antonioni who said you want every narrative feature to feel like a documentary, and you want to lure people in with the feeling. One of my favorite movies is Once. I just love it because I’m tricked by it. I want to trick people.

Yeah. The moment that movie ended I just went home and Googled the people and was like, “Are these the people? What are they doing now?”

How different was directing a second time around? Was it easier?

It’s easier because you know more. It’s harder because you know more of what you can f–k up. First time around, you’re like, “All right, let’s figure this out.” Second time, you’re like, “If we don’t figure this out, we’re screwed, and we’ll lose Keegan to a studio film and we’ll lose Gillian to her TV show, we’re never going to have this again.” There’s this screenwriting podcast called Scriptnotes, and one of the things [screenwriter] Craig Mazin said once is that TV is like a chemistry experiment, because every week and every season you can change the elements. Film is like a biology experiment: you put all these things together, and it works or it doesn’t. And you don’t have another shot. When this movie’s done, that’s it. There’s not gonna be a sequel.

Well, Don’t Think Thrice is the title. We have that. But no, there’s no sequel. I don’t believe in sequels.

You wrote on your website that you hope people will see this in theaters. And these days people are increasingly watching movies, especially smaller indie films, from their couches. Do you feel like something is lost when we watch movies this way?

I do. This is a certain type of movie that I feel like people don’t make that often. It’s a movie where you laugh, you cry, you laugh, you cry, and you hopefully talk about it with your wife or boyfriend or best friend for six years. I think that the experience of seeing a movie like that in the theater with strangers is a unifying experience. People crying at a comedy in a room together is a powerful experience. I think it’s more powerful than any ride at Universal Studios. 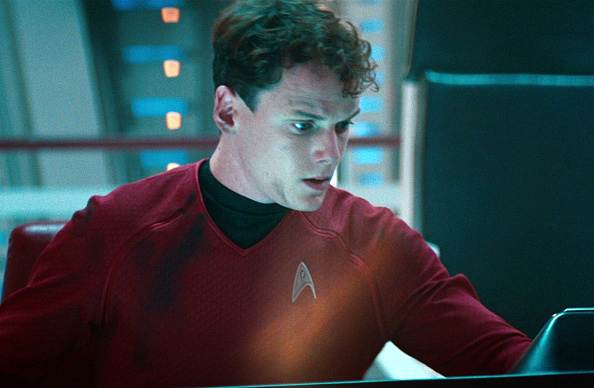 Star Trek Beyond Cast Pays Tribute to Anton Yelchin With Moment of Silence
Next Up: Editor's Pick