Meet the Politicians Speaking at the Republican Convention Tuesday

With a number of Governors, Senators and former candidates choosing to skip the convention, the schedule of speakers has instead included actors, reality show stars and members of Trump’s immediate family.

But Tuesday is the exception, with a roster of politicians that looks more like a traditional convention lineup.

Here’s a look at the politicians who will speak on Tuesday night.

The Senate majority leader from Kentucky was a late and tepid Trump backer once his nomination became nearly inevitable. McConnell has been critical of Trump as the nominee, suggesting Trump needs to become more serious. He’s expected to criticize Hillary Clinton.

Speaker of the House Paul Ryan

Trump has been a headache for the Wisconsin congressman, who withheld his endorsement for a long time. After he finally gave it, Ryan has had reason to speak out against some of Trump’s statements, but ultimately gritted his teeth and stuck to his endorsement.

House Majority Leader Rep. Kevin McCarthy stands on stage prior to the start of the second day of the Republican National Convention on July 19, 2016 at the Quicken Loans Arena in Cleveland.
Alex Wong—Getty Images

Sen. Shelley Moore Capito, checks out the stage before the opening session of the Republican National Convention in Cleveland,July 18, 2016.
Carolyn Kaster—AP

The Republican Senator from West Virginia previously served in the U.S. House of Representatives. Moore Capito has stated she believes violence at Trump protests is “a poor reflection on the protesters.” She is solidly pro-life and has in the past campaigned with Speaker Ryan.

The Wisconsin Senator is up for reelection this fall, and has carefully backed Trump, offering support instead of an endorsement. Johnson had previously insisted he would stay away from the RNC, but he’s facing a tough race against former Sen. Russ Feingold.

The New Jersey Governor endorsed Trump for president soon after he himself withdrew from the presidential race. He was on Trump’s vice presidential shortlist before Trump chose Mike Pence as his running mate.

Retired neurosurgeon Ben Carson raised more than $50 million for his 2016 Republican presidential bid. Since his keynote speech at the 2013 National Prayer Breakfast, Carson has attracted a conservative following. He placed fourth in the Iowa caucuses and ultimately dropped out of the primaries in March, endorsing Trump.

Arkansas Governor Asa Hutchinson stands on stage prior to the start of the second day of the Republican National Convention on July 19, 2016 at the Quicken Loans Arena in Cleveland.
Alex Wong—Getty Images

Hutchinson has expressed doubts about Trump as the Republican nominee. He initially endorsed Sen. Marco Rubio over Trump, stating on NPR that he did not consider Trump’s discussion of issues serious.

The former attorney general has been outspoken against Clinton in her email scandal, where she used a private server to send work-related emails while she was Secretary of State, and has been a national security adviser to former candidate Jeb Bush.

Will Drabold and Julissa Higgins contributed to this report 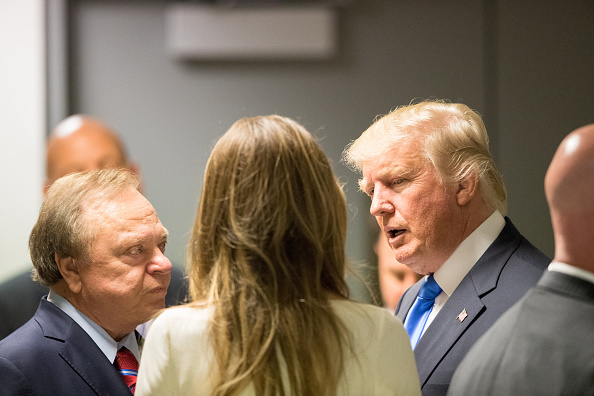