Late Late Show host James Corden is never one to shy away from hanging with major celebrities. So it shouldn’t come as too much of a surprise when Corden gets a call from none other than Kanye West… except it’s actually just Kim Kardashian West’s Snapchatted footage of West on the phone. (Confused? See here.)

In his latest clip, Corden splices together West’s recorded conversation with Taylor Swift and his own questions and commentary. In the new context, West’s words take on a whole other set of meanings.

When Corden picks up the phone, the chat starts off strong with the infamous line from “Famous” that kicked off the whole debacle:

“Wow, really? Taylor Swift?” Corden responds, stunned. “Isn’t she mad at you from when you interrupted her on stage at the VMAs? I don’t know if she’d be open to that. I don’t even know if she’s with someone right now. Like, you can check on the Internet, but she’s super private about that kind of stuff, she really doesn’t let people know what’s going on in her personal life, so if I was you I’d just let it go,” Corden adds — very tongue-in-cheek.

Then Corden seeks out West’s advice.

“Listen, I’m thinking about doing a joke about Mike Pence, Donald Trump’s VP? I don’t know… I don’t want to hurt his feelings, you know? 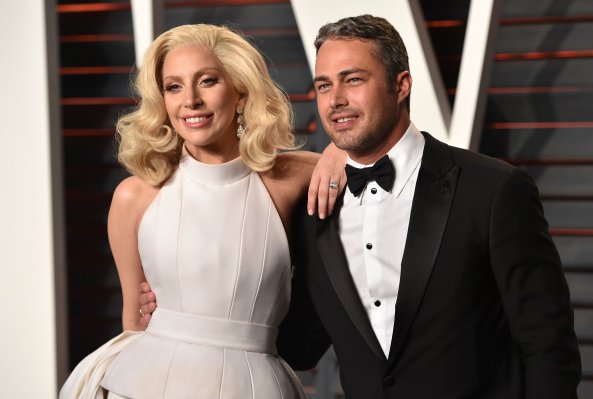 Lady Gaga and Taylor Kinney Have Called Off Their Engagement After 5 Years Together
Next Up: Editor's Pick