Susan Shaheen, a Berkeley professor specializing in transportation study, may know more about ride-sharing than any other academic in America. And that has put her in a position to broker deals with hot transportation startups: They give her access to their data, and she assesses their environmental impact. Many of these companies are willing to share for the potential to gain unbiased confirmation of a key selling point — that their models have the potential to improve our transportation ecosystems.

While a landmark study on Uber and Lyft remains forthcoming, Shaheen is publishing her team’s assessment of one-way car-sharing company Car2go on Tuesday. “We had access to an unprecedented data set where we were really able to ask all the questions we wanted to ask,” she says, like what people were doing to get around before they started using the service and how it has changed their behavior since then.

Nearly 10,000 people were surveyed in total, and Shaheen’s take is that even under the most conservative assumptions, the results show that Car2go helps get more cars off the road than it brings on. That means “notable reductions” in greenhouse gas emissions and other positive effects, like inspiring people who have other options not to buy personal vehicles. One of the biggest problems in transportation today is the high percentage of people who are driving around alone, clogging up highways in machines that sit dormant in driveways the vast majority of the time.

Car2go is mainly a one-way “floating model.” Unlike round-trip models, in which have users pick up and drop off a shared car at the same place, Car2go users can get access to a car and then drop it off anywhere within a given zone of a city. Rather than paying by hour, users pay by the minute. Studying the users in five North American cities — Calgary, San Diego, Seattle, Vancouver and Washington, D.C. — Shaheen’s research team found that on average, for every shared car Car2go adds to the road, an average of 7 to 11 private vehicles are removed.

The majority of those are “suppressed,” which means that people surveyed said that they didn’t buy a car they otherwise would have because they had access to shared cars through this service. Between 2% and 5% of users said they sold a car because of Car2go, according to the working paper, while between 7% and 10% did not acquire one. In total across those cities, Car2go took an estimated 28,000-plus vehicles off of the road and reduced parking demand, which comes with its own positive “ripple effects” like easing congestion and avoiding wasting gas.

There are some car trips that occurred because the service exists that wouldn’t have otherwise. Perhaps the person would have taken a bus to that concert before, or not gone at all, or driven their own vehicle. But those added vehicles miles are easily eclipsed by the impact of getting personal vehicles off the road, the paper concludes. The average user cut their greenhouse gas emissions by 10% by using the service, Shaheen says.

Ride-sharing is not a panacea. Factors like how robust public transportation is and how much a city sprawls are just a couple of the dizzying number of factors that go into what transportation looks like in a given city. But the report shows that “one-way ride-sharing is an important strategy toward giving people an alternative to car ownership,” Shaheen says. And the more options people have to string together — from ride apps to city bike-sharing to trams — the more potential there is for changing habits. 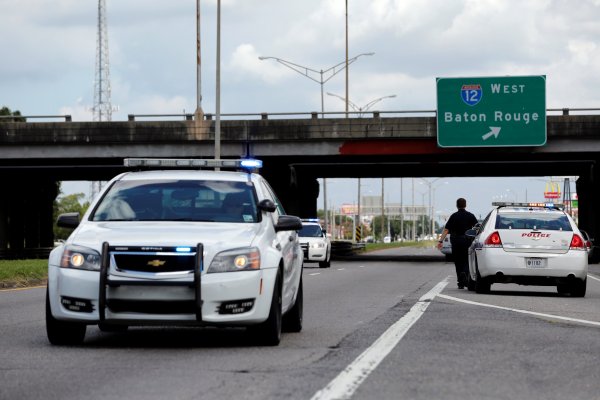 America's Police Respond to Baton Rouge and Dallas
Next Up: Editor's Pick