Meet the Retired General Supporting Donald Trump at the RNC

In the past month, retired Lt. Gen. Michael Flynn has simultaneously blasted the Obama administration for how it is fighting terrorism and diligently worked to promote a new book. Now, Flynn will take the stage at the Republican National Convention to argue for a different approach to fighting terrorists.

Flynn was head of the Defense Intelligence Agency, an arm of the Defense Department’s military intelligence apparatus, until he was fired in late 2014. Earlier this month, Flynn argued he was fired because he believed the United States needed to identify terrorists as radical Islamists and specifically target the extreme doctrine followed by terrorists. “Knowing the current administration will not challenge them, our enemies will press hard to gain every possible advantage before a new president, potentially with the will to win, takes office,” Flynn wrote in an op-ed published in TIME that also promoted his new book, The Field of Flight.

Flynn was reportedly being vetted as a vice presidential for Donald Trump. But the general stumbled earlier this month on abortion and gay marriage, espousing views that seemed to be at odds with the Republican establishment. Nevertheless, Flynn will look to bring credibility to Trump’s message that he is better equipped to handle foreign threats than Hillary Clinton on the opening day of the Republican National Convention. 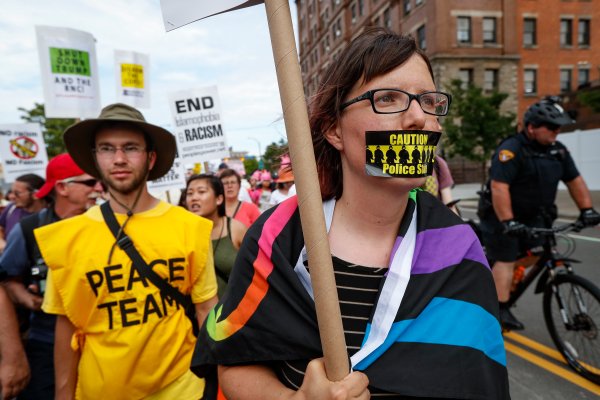 Cleveland Protesters Agree: Other Side Is Brainwashed
Next Up: Editor's Pick