Even as Donald Trump’s presidential campaign highlights growing party unity at the GOP convention this week, it is still acting on grudges against Republican elements who failed to support him.

Speaking to reporters Monday, Trump convention chairman Paul Manafort branded the Bush family as “of the past,” while laying on criticism of host-state Gov. John Kasich for declining to appear at the convention. He also continued the campaign’s victory lap over rogue delegates seeking to undermine Trump in Cleveland.

“He’s making a big mistake,” Manafort said of Kasich, who is in Cleveland but will skip the official convention business, on MSNBC’s Morning Joe. “He’s looking at something that’s not going to happen, he’s hurting his state—he’s embarrassing his state, frankly.”

“What I said is it is embarrassing that the governor is not participating in the convention,” Manafort repeated in a morning press conference previewing the convention program. “We didn’t make that decision, we invited him, we wanted him to participate.”

Ohio GOP Chairman Matt Borges, a Kasich ally who has been instrumental in planning the convention, blasted Manafort on Twitter:

Asked at a press conference about the Kasich criticism, as well as the absence of the Bush family and Mitt Romney, Manafort didn’t back away from the attack.

“This campaign is focusing on 2016, and while we wanted them here we understand that they didn’t want to be here,” he said.

“Certainly the Bush family, while we would have liked to have them,” he continued, before casting them out of the contemporary political debate. “They’re part of the past, we’re dealing with the future.”

“While we would have liked to have them, they do not represent broad strokes of the Republican Party,” he added of the Bushes.

Yet Manafort repeatedly asserted that the GOP was unifying despite their absence.

“We think that the unification is happening, and certainly when the Bush family decides to participate again in the political process that they will join us,” Manafort added, saying the campaign has reached out to the political dynasty.

Manafort also predicted that there would be no drama on the Republican Party rules or platform on the floor of the convention Monday, where anti-Trump delegates are set to make their last-gasp effort to protest Trump. “There’s no more crushing,” Manafort told TIME. “All the juice has been squeezed out of that lemon.” 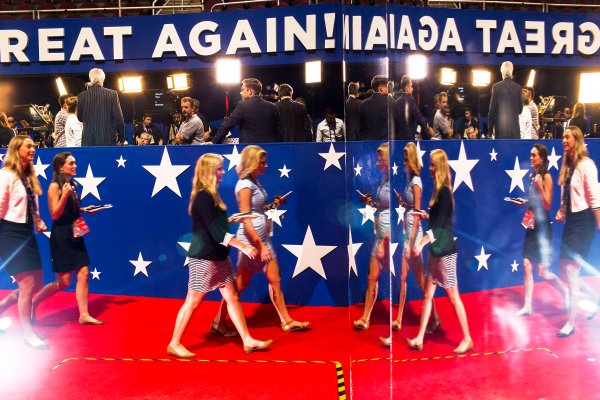 Few Mega Donors Are Ponying Up for the Conventions
Next Up: Editor's Pick