Could Brexit Unite Ireland? Uncertainty Reigns North of the Border

The police keep Nationalist protestors away from a Loyalist feeder parade as it passes the Nationalist Ardoyne shops on its way to join the main 12th July celebrations inn Belfast, Northern Ireland on July 12, 2016.
Paul Faith—AFP/Getty Images
By Sally Hayden / Belfast

It was the evening of the twelfth of July in Belfast, the night Ulster protestants march in orange to mark the 1690 victory of William of Orange over the Catholic James II. Despite the vodka, beer, and tonic wine being swigged by spectators lining the route of the main unionist parade, everything was relatively calm.

At the recurrent flashpoint of Woodvale Road in the west of the city, metal barriers marked the spot where certain Protestant organizations are ordered to halt to avoid clashes with republicans at the next intersection. The first group arrived, wielding large banners with likenesses of William of Orange. As they waited, a local resident approached them — also a unionist, he was furious at the annual intrusion on his street. “All I want to do is live up here and bring up my child in peace, and I have to deal with this,” said the man, who wore a blue baseball cap adorned with a union jack. Then he raised the level of his appeal. “We didn’t vote out for nothing.”

The E.U. referendum may not seem to have anything to do with a centuries-old Protestant march infamous for being marked by violence, but everything is political in a province still marked by decades of conflict. Here, the long-lasting consequences of Brexit have the potential to be dangerously destabilizing — especially with calls coming from both sides of the border for a referendum to unite Ireland for the first time since Home Rule.

Brexit was not considered hugely significant in Northern Ireland during the campaign. “By and large the majority of people were agnostic about the issue,” Jonny Byrne, an academic at the University of Ulster, said. Support was largely divided along sectarian lines, with the Democratic Unionist Party backing Leave and republican parties like Sinn Fein backing Remain.

In the end, a solid 55% voted to remain in the European Union on June 23. That may be because of the visibility of the economic and political bloc in this corner of the United Kingdom. Over the past two decades, the E.U. has spent more than $1.4 billion on peace-building programs between Britain and Ireland. European human rights law also underpins the Good Friday Agreement of 1998, the treaty that allowed Northern Ireland to build a devolved government and put an era of sectarian strife behind it. It’s the same agreement that allows the people here to freely cross a border with the Republic of Ireland once lined by military fortifications.

All of this could now be at risk after the vote went the other way, and there are fears that a return to violence could follow. “The implications here are so significant,” Byrne says. “The E.U. underpins the peace process. The ramifications for us as a society are massive.” Those who remember a border controlled by armed soldiers conducting thorough searches worry about the psychological ramifications of bringing back heavy controls.

Also at risk is the United Kingdom itself. Just as Scottish ministers have said Brexit might be grounds for a second independence referendum, so has enthusiasm grown here for an end to Irish partition — and not just among the usual suspects. Sinn Fein president Gerry Adams said the Brexit vote has given the movement “an entirely new dispensation” to hold a referendum. And this week, the call was joined by politicians across the border in the Republic, where there has traditionally been little appetite for reunification. On Monday, Irish Prime Minister Enda Kenny unexpectedly raised the possibility of a vote, saying Brexit talks should take into account that a united Ireland may be a possibility in the future. Micheal Martin, leader of the center right opposition party Fianna Fail, earlier said a “reunification referendum” ought to be held if popular support grows for an end to Irish partition.

One measure of that support might be the fact that in the weeks since Brexit thousands of Northern Irish citizens have applied for Irish passports — as every resident of the province is entitled to do — causing at least two post offices in Belfast to run out of application forms. Even leading unionist Ian Paisley Jr, who campaigned for Leave in line with the Democratic Unionist Party, courted controversy when he made the unthinkable suggestion that his fellow loyalists begin to apply for Irish passports.

Speaking to TIME, Paisley said that he made his suggestion in jest — but that he expected people were applying for passports simply for practical, and non-ideological reasons. “People have worries, especially if they travel a lot. If you can work the system then work the system.”

In any case he believes that the Republic will not remain a part of the E.U. for long, forced to leave because of the knock-on economic repercussions of Brexit. Then, he speculates, trade deals and free travel could continue unabated between the two countries.

Paisley also dismissed claims that a Brexit makes a vote on uniting Ireland any likelier. Those demanding a referendum on reunification will take any opportunity to so, he says. “I’ve no doubt that hardline republicans will continue to do what hardline republicans have always done… but they don’t need the raison d’être of Brexit to do that.”

The polls are on Paisley’s side, for now. A 2014 survey carried out by the Belfast Telegraph found almost 60% were in favour of Northern Ireland remaining in Britain. So too is Westminster. On July 19, the newly appointed Secretary of State for Northern Ireland James Brokenshire ruled out a reunification vote and insisted Northern Ireland would leave the E.U. along with the rest of the United Kingdom.

Cross-border E.U.-funded peace projects are now scrambling to find ways to guarantee their funding. At the same time, the government in Dublin is beginning to attempt to envisage how border controls might operate in the north, and have expressed a desire to hold an all-Ireland forum to discuss it. The prospects look dim, however; the DUP has refused to participate and Westminster has largely remained silent.

At the moment, the only people subject to border restrictions are a small group of Syrian refugees who came to Derry in April under a U.K. resettlement program, and have been warned that crossing the border may impinge on their ability to get British citizenship in the future. “The process hasn’t begun yet, so we don’t know any more about what a harder border would look like,” said Peter Hutcheon, editor of the local Londonderry Sentinel.

The one certainty about the Brexit vote in Northern Ireland is that it has reinforced longstanding divisions along sectarian lines, just as it has entrenched deep societal rifts across Britain. At the traditional towering bonfires that lit up Belfast the evening before the main orange marches, the usual Irish tricolours and pictures of republican politicians had found new companions. “Brexit. IRA. Scum,” one sign read. Above it, a blue EU flag went up in flames. 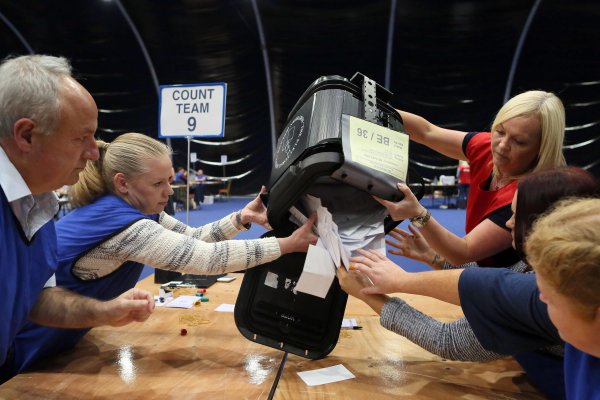 English Brexit Vote Has Revived Calls for a United Ireland
Next Up: Editor's Pick