Three police officers in Baton Rouge, La., were fatally shot on Sunday morning, less than two weeks after a black man, Alton Sterling, was killed in an altercation with officers outside a convenience store in the southern city. Three other officers were wounded after Sunday’s assault, at least one critically.

The suspect has been identified as 29-year-old Gavin Long, who was killed at the scene after firing at the officers. Long “certainly was seeking out police,” Louisiana State Police Superintendent Col. Mike Edmonson said Monday, according to the Associated Press. “His movements, his direction, his attention was on police officers,” Edmonson said.

This is what we know about Long:

1. He has a military background.
Like Micah Johnson, the alleged perpetrator of the July 7 shooting of police officers at a Black Lives Matter protest in Dallas, Long fought for the U.S. military in the Middle East. The AP reports that Long served as a Marine sergeant from 2005 to ’10, and was posted in Iraq from the summer of 2008 until early ’09. He was praised for his service, accruing several medals during his time as a “data-network specialist” in the Marines. He was discharged honorably, and later attended Central Texas College and Clark Atlanta University, according to NBC News, which cited his LinkedIn page.

2. He allegedly leaves a troubling digital footprint.
After Long was identified as the suspect in Sunday’s attacks, media outlets were quick to uncover a series of posts and videos on websites authored by a user named “Cosmo” or “Cosmo Setepenra,” reportedly associated with an email address used by Long. The Los Angeles Times says that the domain name ConvosWithCosmo.club was registered in April using Long’s Kansas City, Mo., address. A similarly named site, ConvosWithCosmo.com, includes links to podcasts, YouTube videos, and other content that appear to be by Long, according to NBC News. Biographical data on the site, such as military service, also appears to align with Long’s.

Many of the posts made by the user “Cosmo” or “Cosmo Setepenra,” are of violent and incendiary nature, the Washington Post reports. In now deleted postings to a YouTube channel named “Cosmo Setepenra,” made shortly after the Dallas killings, a man appearing to be Long reportedly called on black men to make sacrifices for their race and talks about “protesting, oppression, and how to deal with bullies.”

“You gotta fight back,” he allegedly says in one video that was quoted by the Guardian.

(TIME has not authenticated the videos or the ownership of the YouTube channel.)

3. He reportedly claimed to not be affiliated with any movement or entity.
According to NBC News, “Cosmo” emphasized this point in a deleted video originally posted on July 8.

“I want to let y’all, if anything happens with me … don’t affiliate me with nothing … I’m affiliated with the spirit of justice, nothing more nothing less,” he is quoted as saying. 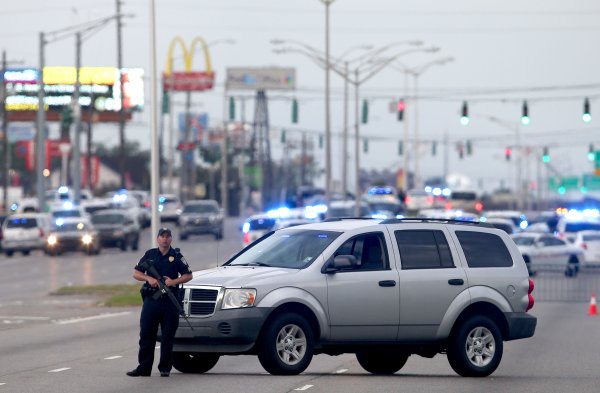 Baton Rouge Shooter Was 'Seeking Out Police'
Next Up: Editor's Pick