This undated photo made available by the Baton Rouge Police Department shows officer Montrell Jackson. Jackson, 32, has been identified as one of the police officers killed in a shooting July 17, 2016, in Baton Rouge, La.
AP—AP
By Simon Lewis

One of three police officers killed by a gunman in Baton Rouge, La., on Sunday penned an emotional Facebook post earlier this month following the police killing of Alton Sterling — a black man whose death sparked furious protests.

The Baton Rouge Police Department has identified 32-year-old Montrell Jackson, who had served on the force for a decade, as one of the officers fatally shot while investigating a report of a man with an assault rife. The department paid tribute to Jackson and Matthew Gerald, 42, whom it also named as one of those killed Sunday morning, saying they “were great examples of what it means to protect and serve — a mission they demonstrated through their work at the department and in their daily lives.”

Three days after Sterling’s death on July 5, Jackson took to Facebook to vent his feelings. “I’m tired and physically emotional,” wrote the officer, who according to reports had recently fathered a baby boy. He wrote that he was “disappointed” by some of the “reckless” comments of others, including fellow officers, in the heated atmosphere following the shooting. He also thanked others for showing support to him and his wife.

“I swear to God I love this city but I wonder if this city loves me,” Jackson wrote. “In uniform I get nasty hateful looks and out of uniform some consider me a threat.”

The Associated Press said a family friend had confirmed the veracity of the post, which no longer appears on Jackson’s Facebook page.

“These are trying times,” Jackson wrote. “Please don’t let hate infect your heart. This city MUST and WILL get better … I’m working in these streets so any protesters, officers, friends, family, or whoever, if you see me and need a hug or want to say a prayer. I got you.”

Cell-phone video taken by a bystander appeared online immediately after Sterling’s death, and appeared to show him already pinned to the ground before an officer opened fire. Thousands of people joined protests in Baton Rouge, which soon spread nationwide, fueled by another shooting of a black man by a police officer a day later in Minnesota — this time the aftermath was broadcast live online by the victim’s girlfriend via Facebook.

Jackson’s killer, meanwhile, has been identified as 29-year-old former U.S. Marine Gavin Long. The shooting comes only 10 days after another veteran killed five police officers in Dallas. The Dallas shooter, Micah Johnson, told law enforcement during a standoff — before he was killed — that he was upset about recent shootings of black men by police that have roiled relations between police and African-American communities across the U.S. 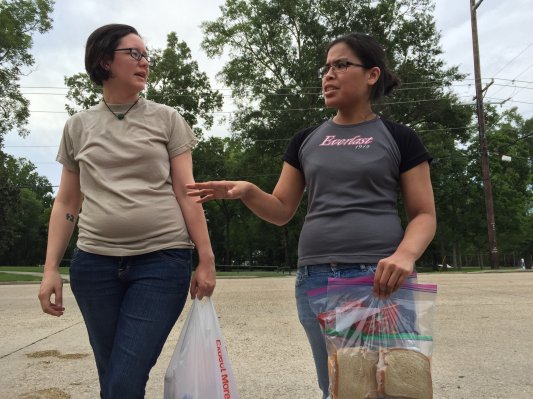 The Shooting Started in Baton Rouge. She Ran Toward It
Next Up: Editor's Pick