The Shooting Started in Baton Rouge. She Ran Toward It

Gillian Triche, left, and her girlfriend Lillian Phillips hold on to the sandwiches and chips they packed for D'Ante Randolph before walking him home on July 17, 2016
Claire Byun
By Claire Byun / Baton Rouge, La.

Not many people run toward the sound of gunfire, but for 31-year-old Gillian Triche, running into a dangerous situation is just a natural instinct.

The Baton Rouge, La., resident was doing her math homework when she heard several gunshots near her home on Old Hammond Highway. Without even questioning it, she jumped into her truck and sped toward Airline Highway where a Missouri man had shot and killed three police officers.

Triche heard one single shot — which echoed and cracked like only gunfire can — and then bursts of three gunshots for the next few seconds, she said.

“As a soldier, I wanted to see how I can help,” she said. “When I found out there was nothing I could do, I started filming to get the story out.”

Triche was just a few hundred feet from where dozens of police, EMS and SWAT vehicles were waiting outside of the B-Quik gas station where the shooter was found. She started livestreaming the scene on Facebook, though she said there wasn’t much to see at first. Triche said police were “pulled back” from the gas station at first and everything seemed still. She heard an officer tell the suspect to come out with his hands up, but then she was waved from the area by police. Triche chose to take shelter in an Albertsons Grocery across from the gas station, to the dismay of her girlfriend Lillian Phillips.

Phillips, 31, was asleep when Triche ran toward the gunfire. She awoke to a text alerting her that her girlfriend was squirreled away in Albertsons after speeding toward the danger, so she decided to walk toward the store and get Triche herself.

But Phillips was turned away from the scene by police, which was when she met up with D’Andre Randolph, who was walking to work. She immediately offered to take him to safety.

She took Randolph into her home for a few hours until Triche returned from the shooting scene. Randolph, who was heading to his second job when the shooting occurred, recalled seeing “a bunch of police cars shooting down Airline.” Police closed all the roads that led to his work — and his home — so he just walked until Phillips found him.

Triche returned home around 3:30 p.m. and, once all together, the trio decided to walk Randolph back to his home. The women didn’t want him to go alone or to go hungry, so they packed up some chips, sandwiches and water for the journey.

Strangers at first, the trio “are best friends now.”

Triche said she’s concerned this event will set off even more tragedies in the area, especially given the tension over the past few weeks in Baton Rouge following the death of Alton Sterling, who was killed by police on July 5. The combat veteran said that while she supports the police — especially those she’s served next to — she understands the frustration in the black community.

“If you have any type of racist ideals, you have no right to be wearing a uniform,” Triche said.

For now, she’ll continue to help her community in any way she can, whether it’s livestreaming breaking news, packing sandwiches for a new friend or supporting the causes she believes in.

“I support police officers and I support Black Lives Matter,” she said. “Those two are not mutually exclusive.” 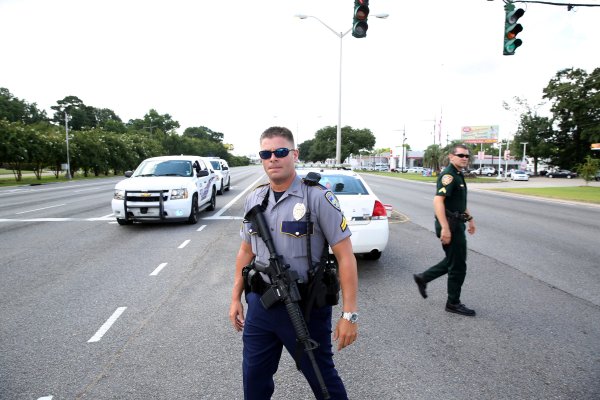 Weary Baton Rouge Struggles to Come to Grips With Latest Deadly Shooting
Next Up: Editor's Pick