Donald Trump formally announced Mike Pence as his Vice President pick Saturday in a messy event following a drama-filled rollout of the selection.

“Indiana Governor Mike Pence was my first choice,” Trump said in New York City, battling rumors that he had eleventh hour doubts about Pence after his choice was leaked on Thursday. Pence, when he eventually appeared onstage, said he got the job offer from Trump on Wednesday (when TIME reports Trump also called Jerry Falwell Jr.), addressing doubts that Trump was still making up his mind at the end of the week.

But before Pence took the podium, Trump was onstage alone for about 28 minutes, occasionally mentioning Pence but more often going through his standard stump speech: attacking Hillary Clinton, re-hashing primary wins and touting business accomplishments. When Trump did mention Pence, he said, “One of the big reasons I chose Mike is party unity, I have to be honest.”

After reading a script of Pence’s successes in Indiana, Trump ceded the stage to Pence, and the differences in the two men’s styles were thrown into sharp relief. Where Trump kept deviating from his prepared remarks, riffing in his usual freewheeling style, Pence stuck to a more traditional political speech and repeatedly highlighted his faith. He said his first thought when Trump offered him the vice presidency was, “Who am I, oh Lord?” and said that he’s “a Christian, a conservative and a Republican, in that order.”

The two men didn’t appear onstage together until the very end of the press conference, shaking hands before Pence went down a receiving line of handshakes of Trump’s family. But as TIME’s Alex Altman wrote about the pick, “Trump wasn’t hunting for a kindred spirit. By tapping Pence for the role, he’s getting a movement conservative out of central casting, a seasoned politician whose selection may soothe Republicans still skeptical that Trump is one of them.” 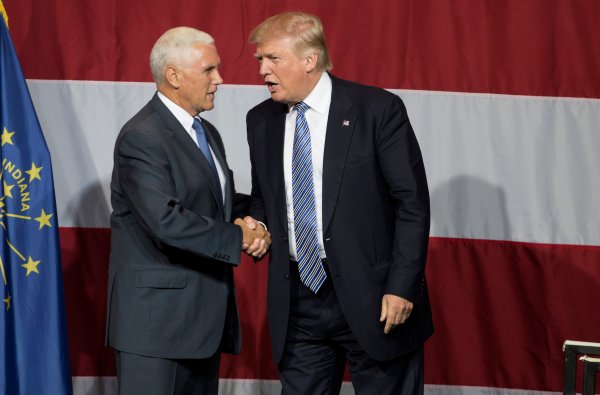