People gather to protest against the shooting of Alton Sterling on July 10, 2016 in Baton Rouge, Louisiana.
Mark Wallheiser—Getty Images
By Katie Reilly

Police in Baton Rouge, La., on Friday arrested a 12-year-old boy who they say is a suspect in a plot to shoot police officers using stolen handguns.

Three other suspects were already arrested in the case, after eight handguns were stolen in a pawn shop robbery on July 9. The others who were arrested are Antonio Thomas, 17, Malik Bridgewater, 20, and an unnamed 13-year old, the Times-Picayune reported.

The 12-year-old boy arrested Friday was charged with simple burglary and theft of a firearm, the AP reported.

Police said the plot was the reason for their heavy response to last weekend’s largely peaceful protests over the death of Alton Sterling, a black man who was shot and killed by police officers on July 5 while he was pinned to the ground outside a convenience store. The American Civil Liberties Union of Louisiana is suing Baton Rouge police over their treatment of protesters, claiming authorities used excessive force and carried out mass arrests.

“We took this as a very viable threat,” Baton Rouge Police Chief Carl Dabadie said at a press conference last week about the robbery, according to USA Today. “We have received questions as to why we used such a show of force during weekend protests, this is why.”

The robbery followed the killing of five police officers by a lone gunman in Dallas. 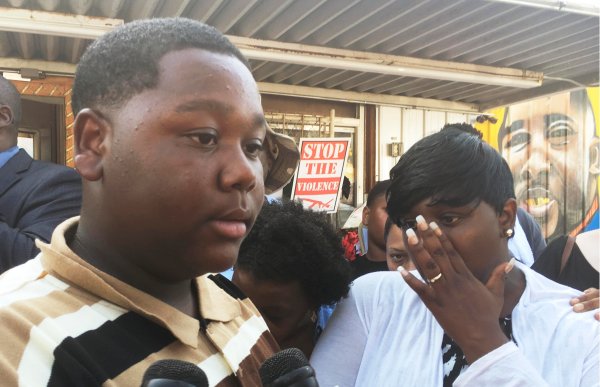 Alton Sterling's 15-Year-Old Son: Protest in Peace, Not Violence
Next Up: Editor's Pick