FOIA at 50: How American Views of Transparency Have Changed

It started in 1953, when California Congressman John Emerson Moss Jr. was denied a request to access information from the U.S. Civil Service Commission. His quest to establish a “right to know”—something that is not contained in the Constitution, and was coined in the mid-20th century—led directly to the passage, 50 years ago this month, of the Freedom of Information Act (FOIA). The bill passed unanimously in the House and, despite the numerous exceptions already enshrined within it, changed the role of secrecy in American government by shifting the burden of justification from those who would uncover to those who would shield.

The change wasn’t only on paper: the lifespan of FOIA has been contemporaneous with a major shift in the way Americans think about transparency, as shown by historical opinion polls compiled by the Roper Center for Public Opinion Research in honor of the law’s anniversary.

The act was signed on Independence Day 1966. In signing it, President Lyndon B. Johnson said that he was “hopeful” that the government could weigh several conflicting elements in its execution of the law: the benefit of voters having more information, the need to protect national security and the importance of government personnel being able to have private interactions. That was a balance that had been on the minds of many for decades by that point, as Roper Center researchers found. Surveys about the public’s right to know that go all the way back to the pre-FOIA years after World War II, when a 1947 poll showed that 59% of respondents believed the government was keeping too much information from the people.

“One might expect that after the war people would be willing to let the government keep certain information secret for security reasons,” says Kathleen Weldon, Director of Member Relations and Communications at the Roper Center, “but nonetheless you see a solid majority of Americans saying that the government was holding back information that people ought to have, which I found surprising.”

Post-FOIA, in the 1970s, with the Pentagon Papers and Watergate illuminating the potential harms of secrecy, a new wave of concern swept Washington—along with the realization that the 1966 version of the act had very little concrete effect. The law would subsequently be amended, over the veto of President Ford, in 1974. (Further amendments followed in 1976 and after.)

As TIME explained during that tumultuous period, the “mania for classification” was a “byproduct of America’s rise to world power.” The fact that the rise had come amid World War II and the Cold War started the government down a path of loose-lips-sink-ships mentality, the magazine argued. So it should be no surprise that one 1977 poll found that 76% believed that the legislature should work to make government more transparent than it had been.

Generally, the more that the FOIA could do, the more people wanted to know. After one round of amendments in the 1970s, TIME reported a sixteenfold increase in demands for documents from the FBI, versus a similar period before the change. But that doesn’t mean that the entire history of FOIA has been one of increased demand for information: in the 1980s, the decade when the power of the FOIA was walked back by executive order by President Reagan, the shock of Watergate had been slightly dulled and people became more aware that fulfilling FOIA requests might require an army of bureaucrats.

As Frank Trippett once put it, “Americans for the most part bridle at the concealment of information only when they catch government practicing too much of it.”

In the 21st century, the concern has operated in another direction: though Americans have been made more aware of the secrets kept by government, in the wake of Wikileaks and other exposures, they are also more aware of the fact that their own personal information (say, mortgage records) may be subject to FOIA disclosure and could easily spread on the Internet. Recent polls have shown that a majority of Americans don’t feel that the current administration has lived up to its self-professed transparency goals, but that feelings about making information public varied widely depending on the information in question.

But, says the Roper Center’s Weldon, even those numbers don’t tell the whole story.

There is no single question set that the center was able to use to trace feelings about transparency throughout the 50-year history of the FOIA: no pollster has asked the same question regularly throughout, so the numbers can be hard to compare. But the changing questions, says Weldon, can reveal plenty. “Polls tend to reflect the debates that are going on at the time,” she explains. That’s why questions about the same topic (how much information should the government share with the people?) are phrased as matters of national security, size of government, press freedom or personal privacy, depending on the context.

And perhaps the most significant revelation from those polls is the concept that’s not asked about early on: the general idea of transparency.

“This idea that the government is supposed to be transparent, that its inner workings should be revealed to the people, something that’s really been developed over time since the Freedom of Information Act was passed and more information has become available,” Weldon says, “has become a greater part of the debate.”

It’s useless for a pollster to ask a question that the respondent doesn’t understand. So, though questions may indicate that people were conscious of transparency issues as they related to wartime secrets, the phrasing of these polls suggests that the philosophical debate about openness wasn’t exactly a mainstay of the American dinner table. It took time for pollsters to feel confident enough asking questions that used phrases like “freedom of information”—as, for example, in a 1990 poll that found that a majority people believed freedom of information laws made it too easy for individuals to get documents.

Questions like that are an important legacy of the Freedom of Information Act: no matter what Americans think of government transparency, it’s now at least something they think about. 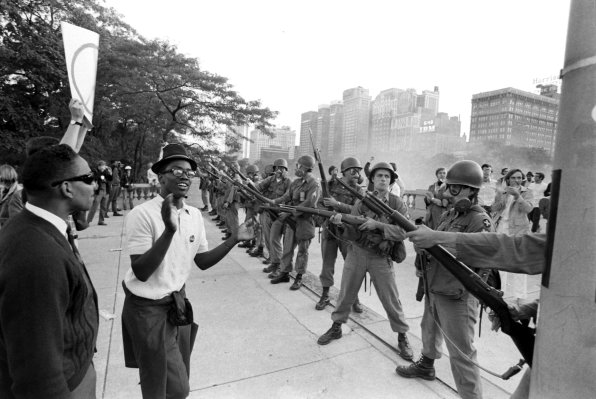 See Unpublished Protest Photos From the 1968 Democratic Convention
Next Up: Editor's Pick