Heartbreaking Photo Shows the Indiscriminate Carnage of the Nice Attack

A body is seen on the ground July 15, 2016 after at least 84 people were killed in Nice, France, when a truck ran into a crowd celebrating the Bastille Day national holiday.
Eric Gaillard—Reuters
By Olivier Laurent

As soon as Nice-based Reuters photographer Eric Gaillard heard about Thursday night’s deadly attack on a crowd of Bastille Day revelers, he raced to the scene and took hundreds of photos capturing the chaotic aftermath and unbearable toll. It was only later, as Gaillard reviewed his photographs, that he realized the power of one image in particular.

“When I shot this photograph, I didn’t think about the reactions, the feelings it might produce,” Gaillard says. “It might sound harsh, but when you’re working in this kind of situation, you think about the job you have to do.”

The photograph, which has been shared widely on social media, shows the body of one of the 84 victims of the truck attack covered in a first-aid blanket. The body lies on the road next to a baby doll dressed in pink. The contrast of colors—the gold and the pink against the dark asphalt—is striking, as is the presence of a child’s toy amid the gruesome scene.

Many questions about this photograph will remain unanswered: did the doll belong to the victim? How did it end here? But for Gaillard, there’s no doubt that the photo speaks of the indiscriminate nature of Thursday night’s carnage. “It’s spellbinding,” he says.

Gaillard, who lives in Nice, was on vacation from work after four weeks spent covering the Euro soccer tournament. “I’m going to cover the Olympic Games in three weeks, so I was taking a break,” he says. “I was at home with my wife and my daughter, when we heard the sirens.”

A body is seen on the ground July 15, 2016 after at least 84 people were killed in Nice, France, when a truck ran into a crowd celebrating the Bastille Day national holiday.
Eric Gaillard—Reuters

When he found out about the attack, Gaillard grabbed his camera, jumped on his motorcycle and made his way towards the Promenade des Anglais. “I had trouble understanding what had happened,” he says. “I didn’t know what exactly, where it had happened.” So he followed the commotion, reaching the security cordon already in place. As he was about to set his motorcycle’s kickstand against a curb, Gaillard realized the true scale of the tragedy. The curb was actually a body, one of the many littering the road.

“I’ve covered many conflicts in the past, but I have to admit,” he says, “when it happens in your own city, it feels different.” 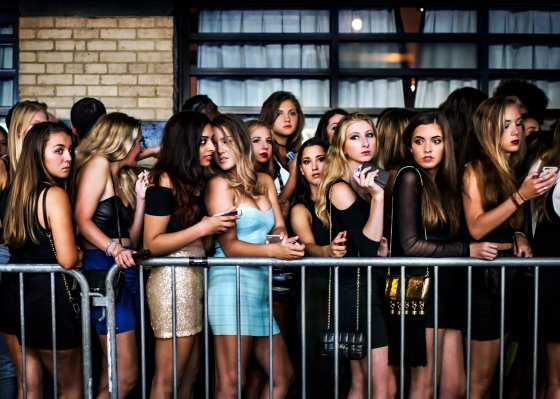 A Girls' Night Out in New York's Meatpacking District
Next Up: Editor's Pick