Nice Awakes to a Changed City on Morning After Attack

Policemen walk on the site where a truck drove on Thursday into a crowd watching a fireworks display on the Promenade des Anglais seafront, in the French Riviera town of Nice, on July 15, 2016.
Valery Hache—AFP/Getty Images
By Vivienne Walt/Nice

Nice is a city in shock. This community of about 340,000 people has for decades defined itself by its serene beauty and breezy Mediterranean lifestyle but on Friday, its famed seafront, the Promenade des Anglais was splattered with blood and closed by police.

The 19-tonne commercial truck, used to kill at least 84 people, was being examined by police on the promenade, while others searched the north-Nice home of the driver Mohamed Lahouaiej Bouhlel,31, who was himself killed by police after careering through crowds for a least one mile.

Tourists and locals described how—just as the fireworks and music were reaching their final crescendo—they spotted a white truck move towards them at high speed, and then plough into crowds. Some said they momentarily froze in terror as they watched the vehicle mow down babies, children, men and women, crushing strollers and bodies in its wake.

“There were bodies, bodies everywhere,” says Habiba Sbai, 50, a Tunisian woman who immigrated to Nice 20 years ago, and works as a contractor. Holding back tears, she said she and her husband fled to their apartment a few blocks from the promenade, terrified that there might be further attacks. There they sat up all night, shaken. “I saw a baby lying dead in front of me,” she says. “After seeing that, I cannot sleep. I cannot work.”Her cell phone rang while she was speaking: It was a friend informing her that her colleague had been killed.

One day after the horrific bloodbath, residents expressed the fear that the government and police might be powerless to stop terror attacks, despite the heavy presence of police and armed soldiers in public places over the past several months.

Emmanuel Bajux, 22, who had come to Nice from Paris to look for work in one of the many tourist bars, said he struggled to escape from the promenade on Thursday night, since the narrow roads leading up from the promenade were jammed with people fleeing. “There were people everywhere, running,” he says. Now, he says he doubts he will feel safe in Nice. “The city will not be the same again. We do not feel protected.”

In fact, the sense of danger was remote in Nice until Thursday. Low-cost airlines flew over the promenade, even on Friday, bringing plane loads of holidaymakers, who use Nice as their base to tour the Cote d’Azur.

But for locals, the attack has instilled a far more menacing feeling. In a city with a large population of second-generation French Muslims and North African immigrants, the fact that Bouhlel was born and raised in Nice hit hard, leaving some to speculate about his motives. “These people are manipulated by the mosques,” said Nadia Le Fur, an Algerian immigrant to Nice, who stood on the promenade on Friday with her 9-year-old son. “I tell my kids about the real Islam, and that we don’t believe in terror.”

Le Fur said she her husband had returned home at 3 a.m. on Friday, after his shift working in a hotel that sits on the promenade, and had clearly been deeply affected by the bloodshed outside. “He was very, very pensive and shocked, quiet,” she said. “I did not recognize that man.” 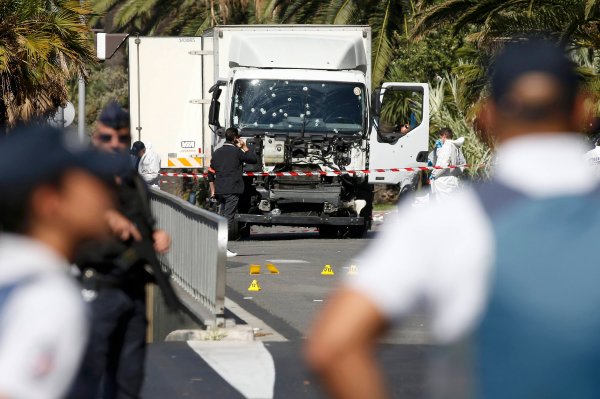 Using a Truck as a Weapon Called an 'Evolution' in Terror Strategy
Next Up: Editor's Pick