What We Know About the Driver in the Nice Attack

Investigators continue to work at the scene near the truck that was driven into a crowd at high speed, killing scores who were celebrating Bastille Day on July 14, on the Promenade des Anglais in Nice, France, on July 15, 2016.
Eric Gaillard—Reuters
By Dan Stewart , Tessa Berenson and Tara John

The driver of a truck that plowed into a crowd on the Nice waterfront, killing 84 people and injuring scores more, has been identified by authorities as Mohamed Lahouaiej Bouhlel.

Details are still emerging but here’s everything we know about the driver so far:

Where is he from?
The 31-year-old was born in Tunisia, but lives in France. Police described him as French-Tunisian. A house in Nice Nord, to the north of the city, was under investigation by police early Friday and online records suggest it was Bouhlel’s residence. According to the Associated Press, the apartment was occupied by his estranged wife, who was taken to be questioned by authorities. The couple reportedly have three children.

A woman who lives in Bouhlel’s apartment complex told The Telegraph, “He lived alone. He said very little to anyone and wasn’t very polite. He wouldn’t hold the door open for you.”

A French prosecutor said Friday that Bouhlel worked as a delivery driver, but used a rented truck to carry out the attack.

Does he have a record of extremist activity?
No. A French prosecutor said Friday that Bouhlel was known to police for sometimes violent delinquent activity, and he had been given a six month suspended sentence this year for an assault in January 2016. But Bouhlel was not under investigation by France’s antiterror authorities.

Did he claim allegiance to ISIS?

There’s not yet any evidence to suggest he did, but ISIS claimed the attack on Saturday in a statement. According to the SITE Intelligence Group, ISIS’s statement said their “soldier” perpetrated the attack.

Did he have accomplices?

French authorities arrested three members of the attacker’s “close entourage” in Nice on Saturday reports Reuters. The Paris prosecutor’s office told AP that five people are now in custody. Police have yet to determine whether Bouhlel was acting alone or with accomplices. 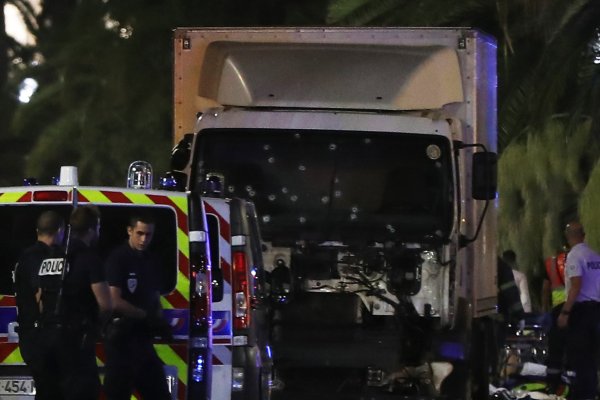 The Social Media Response to Nice Was Heartbreakingly Familiar
Next Up: Editor's Pick