What Theresa May, Jamie Dimon, and the Fight for $15 Have in Common

Theresa May arrives for David Cameron's final cabinet meeting before she takes over and appoints a new office, in London, on July 12, 2016.
Kate Green—Anadolu Agency/Getty Images
By Rana Foroohar

Pay inequality–both the rising pay packages for executives and the “fight for $15” at the lower end–is back in the news. JPMorgan Chase head Jamie Dimon gave his lowest paid workers a raise to $12 an hour recently, a nice gesture, although somewhat offset by the fact that his own pay rose 36% to $27 million last year. (Banking executives on the whole got an 8% hike despite falling profits and lower than average returns on equity within the industry as a whole.)

No wonder the new British Prime Minister, Theresa May, is calling for an overhaul of executive pay and for workers to be on the boards of companies, a la the German model of “co-determination,” to help mitigate excess. Meanwhile, the dogma of “shareholder value” as the only metric for corporate success–a philosophy that holds that the stock price is the only true value of a firm and that executives are legally bound to increase it–is rightfully coming in for more and more criticism. As I’ve been arguing for some time, it’s part of a dysfunctional cycle that increases inequality and reduces overall economic growth.

I think that these debates are only going to heat up in the coming year for two reasons. One, there’s no sign that the share buyback phenomenon, by which companies artificially jack up their stock price by decreasing the number of shares on the market, is ending any time soon. Indeed, a new Goldman Sachs economic report forecasts that buybacks “represent the sole source of demand for US shares,” at the moment, in large part because the S&P is overvalued by many metrics. (Indeed, stocks are trading at multiples as high as they’ve been since 1976.) The bank is estimating that corporate earnings will fall in the second half of this year, which may be the reason that they also expect the bulk of firms to do more buybacks in advance of they.

It’s the only way to bolster the share price, since the report also notes that capital investment is trailing cash flow. The great irony, is that this failure of U.S. public companies to invest in things like worker training, R&D, factory upgrades etc., over not just the last year but the last four decades, is a key reason that earnings growth is tapped out now. A full 67% of S&P 500 revenue comes from U.S. sales. The world is globalized, yes, but the fate of the largest American companies is still intricately tied to US demand (the same trend holds for most developed countries). That’s why executives like Dimon, as well as politicians like Theresa May, are suddenly so interested in bolstering low wages. Inflation-adjusted minimum wages have been stagnant since the 1980s, and corporations and the politicians they influence are finally feeling the hit, both in their bottom lines, and in their political systems (hello, Brexit). They know that in an economy largely depending on consumer spending and domestic demand, you can’t have a sustainable recovery—or more stable politics—unless people feel better off.

Will the fight for $15 change the nature of our recovery? Only if it’s part of a broader set of reforms, like portable benefits, an increased social safety net, and the sort of worker involvement in corporate management being proposed by folks like Theresa May. The polarization of the job market isn’t limited to the lower end of the pay scale–any routine job, from middle market sales and office administration, to retail sales, to data crunching–will be done by software in the future, and thus the structure shifts undermining the labor wage share will not only continue, but move higher up the food chain.

Fixing this will require not just raising pay at the lower end, but helping curb it at the top (check out this new study about how buybacks, which enrich mainly the C-suite, also degrade corporate value), and creating a new paradigm for “stakeholder” rather than “shareholder” value. Thus, I’m more optimistic about plans like May’s–which change the nature of how companies are managed–than I am about just hiking minimum wages (which, to be clear, I’m also for) in terms of bigger picture impact on economic growth. I’ll be interested to hear how this conversation plays out not only in terms of Brexit, but at the DNC in a couple of weeks. 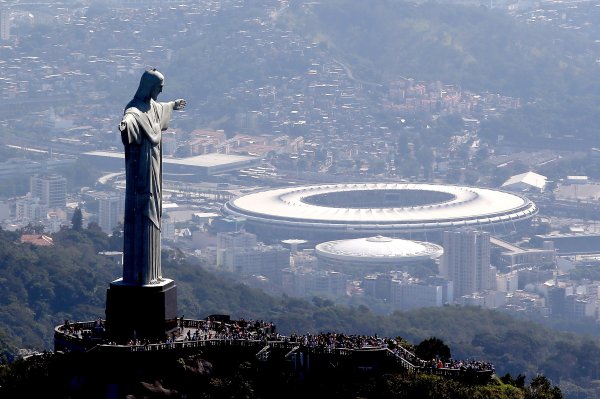 The Summer Olympics Should Always Be in Los Angeles. Forever.
Next Up: Editor's Pick