This New Dinosaur Had Tiny Arms Just Like Tyrannosaurus Rex

A general view of Gualicho shinyae, an unusual carnivorous dinosaur that lived at the Argentinian Patagonia during the Superior Cretacious period, presented during an event in Buenos Aires on July 13, 2016.
Alberto Ortiz—EPA
By Abigail Abrams

Tyrannosaurus rex just got a new friend to join its teeny-tiny arms club.

Gualicho shinyae, a newly identified dinosaur, was a distant relative of T-rex and had similarly small forearms and hands with two clawed fingers. Like the famous T-rex, this new dinosaur was carnivorous was a two-legged theropod, the New York Times reports.

But what paleontologists are really interested in is that Gualicho shinyae developed its short arms separately from T-rex, according to a new study in the journal PLOS One.

Gualicho shinyae belongs to a different type of dinosaurs called allosaurus, which scientists previously saw with strong, full-sized arms. This is one of the few theropods with miniature arms, and scientists are hoping the new discovery could help them determine the evolutionary causes of these small limbs.

“It begins to tell us a little bit about the story of how and why animals like T-rex and other theropods reduce their forearms,” Peter Makovicky, an author of the study told the Times. 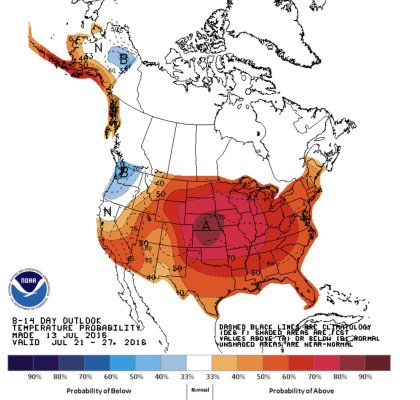 Record Heat to Hit Much of the U.S. Next Week
Next Up: Editor's Pick