On July 13, Carmelo Anthony, Chris Paul, Dwyane Wade and LeBron James began the ESPYS with a call for justice.
Image Group LA—ABC via Getty Images
Ideas
By Kareem Abdul-Jabbar
Abdul-Jabbar is a six-time NBA champion and league Most Valuable Player. He is the author of the new book, Writings on the Wall.

As someone involved with professional sports for most of my life, I’m gratified to see that pro athletes and sports organizations are finally being embraced as leaders against social injustice. Wednesday night, NBA players Carmelo Anthony, Chris Paul, Dwyane Wade and LeBron James opened the ESPY Awards with a call for athletes—and everyone—to work toward change. As Wade said, “The racial profiling has to stop. The shoot-to-kill mentality has to stop. Not seeing the value of black and brown bodies has to stop. But also the retaliation has to stop. The endless gun violence in places like Chicago, Dallas—not to mention Orlando—it has to stop. Enough.” He continued, “Now, as athletes, it’s on us to challenge each other to do even more than what we already do in our own communities. And the conversation, it cannot stop as our schedules get busy again. It won’t always be easy. It won’t always be comfortable. But it is necessary.”

This change will have a long-term effect on American culture. Both the public and the athletes are rejecting the traditional persona of dumb jocks too numbed on steroids to see beyond their own chiseled reflection in a full-length locker-room mirror. That dismissive image has been destructive not just to sports but America in general. It promotes an arrogant, dim-witted role model who lends moral support to bigots, misogynists and homophobes.

The old line about athletes keeping their mouths shut as not to offend the paying customers is thankfully now a thing of the past, when the public chastised pioneers of athletes using their celebrity to publicize a cause. In 1967, Muhammad Ali was vilified and stripped of his heavyweight title for refusing to be inducted into the army in protest of our involvement in the Vietnam War. The next year, when Tommie Smith and John Carlos raised their fists in a Black Power salute during the 1968 Olympics to protest racial inequality in the U.S., they were kicked off the Olympic team, and they and their families received numerous death threats. Jesse Owens, Jackie Robinson, Jim Brown, Billie Jean King and Arthur Ashe all led us forward. Each were evoked last night. I’m honored that my name was among theirs.

Like it or not, kids look up to sports figures. And many have had their hearts broken by shoddy “models” like Lance Armstrong, Ray Rice, Ben Johnson, Aaron Hernandez and many others who have cheated or committed violent crimes. Their sins were selfish or indulgent rage. Today’s enlightened athlete may anger fans—undoubtedly some misguided people were enraged two years ago by LeBron James and fellow NBA athletes wearing “I Can’t Breathe” t-shirts to protest the police killing of unarmed African-American Eric Garner, while several NFL players joined the protest with similar attire or the “hands up, don’t shoot” gesture popularized after Michael Brown suffered a similar fate—but the athletes do so not to promote their own careers, but a stronger, more just America.

There are dangers, too, of athletes speaking out. We don’t always get it right. I admire retired NBA superstar Charles Barkley for joining NBA Commissioner Adam Silver in publicly calling for the NBA to keep the 2017 All-Star Game out of North Carolina in protest to the state’s discriminatory law against the LGBT community by saying, “With the position of power that I’m in… I’m supposed to stand up for the people who can’t stand up for themselves.” Yet, his comments this week blaming much of the black community for its struggles are simplistic, factually inaccurate and dangerous. I also remember back in 2014 when he publicly supported corporal punishment against children, which also showed how athletes must be careful in choosing what to support. “Whipping—we do that all the time,” he said then. “Every black parent in the South is going to be in jail under those circumstances.” His defense of cultural tradition flew in the face of science: This year, an analysis of more than 50 years’ worth of studies concluded that children who were spanked, even occasionally, were more likely to defy their parents, have mental health problems and be anti-social. And next week, former NFL player Tim Tebow will advocate for Donald Trump, who’s advocated unconstitutional policies against people of color as well as against religious freedom. Our celebrity is not a shield against ignorance—it’s a demand for public responsibility.

Being on the right side of history requires some knowledge of the past. From it, we learn that discrimination always is on the wrong side. But we also learn that every time it is defeated, it pops up again somewhere else. In 1965, Aldous Huxley, author of the novel Brave New World, said: “Eternal vigilance is not only the price of liberty; eternal vigilance is the price of human decency.” In the name of human decency, every time we see discrimination, we as athletes and as humans are obligated to attack it. That’s the game we should all be playing. 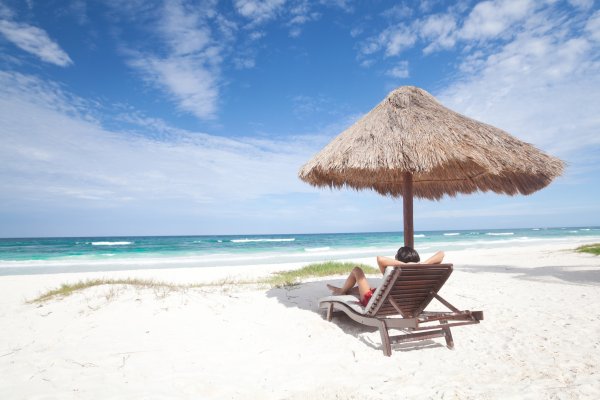 How a Vacation Can Help You Get Ahead at Work
Next Up: Editor's Pick