Suffering and Squandering Hope in a War-Weary Country

In this photo taken late Friday, July 8, 2016, and released by the United Nations Mission in South Sudan (UNMISS), women from neighboring villages rest against a U.N. vehicle as they take cover from the fighting between buildings on the perimeter of a U.N. compound in the capital, Juba.
Eric Kanalstein—UNMISS/AP
By Bryan Walsh

July 9 was the fifth anniversary of the world’s youngest country, but the citizens of South Sudan had no cause for celebration. Heavy fighting between the government forces of President Salva Kiir and troops loyal to his rival, Vice President Riek Machar, broke what had been an uneasy peace. Hundreds of people in the capital of Juba were killed, and tens of thousands were forced to flee their homes.

Though a tentative cease-fire was put into place on July 11, it is at best a temporary reprieve for what has been a two-year civil war. That conflict has divided the country along ethnic lines–Kiir is Dinka, while Machar is from the minority Nuer–and has resulted in the deaths of tens of thousands of people. Over 2 million South Sudanese have been displaced, while rape and other atrocities have become far too common. South Sudan has silently become a human-rights nightmare, one of the worst in the world.

It didn’t have to be this way. South Sudan’s independence in 2011–achieved with the help of the U.S.–was considered a diplomatic landmark. The country is blessed with plentiful oil reserves. But its leaders have repeatedly let South Sudan down. As U.N. Secretary-General Ban Ki-moon said after the latest round of violence, “Rarely has a country squandered so much promise so quickly.”

For more of our best photography, visit lightbox.time.com 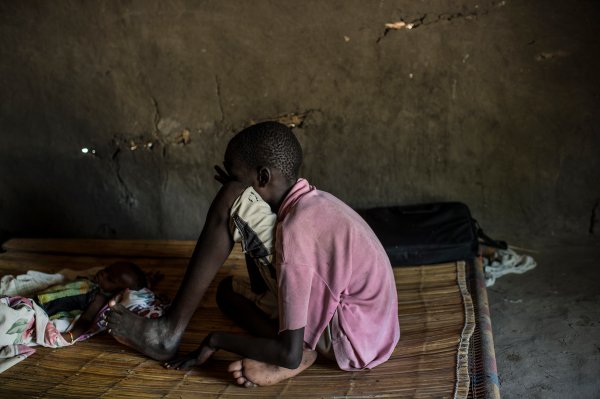 The 13-Year-Old Survived a Horrific War Crime. But He May Never Be Safe Enough to Testify
Next Up: Editor's Pick