Eyes were rolling across Britain last night as the news emerged that one of Theresa May’s first acts as Prime Minister was to appoint Boris Johnson as her Foreign Secretary. Yes, the former Mayor of London cast into the political wilderness just last week has already made a comeback to an office of state held in times past by such figures as the Duke of Wellington, Lord Palmerston and Sir Anthony Eden.

Johnson, it need hardly be noted, is not widely considered to be in the same league as these illustrious forebears. Nor is he someone who has displayed a lot of diplomatic tact over his years as a newspaper journalist, a Conservative MP and latterly London’s mayor. The media in the U.K. and elsewhere quickly highlighted his many, many faux-pas: Calling the people of the Congo “pickaninnies.” Suggesting Papua New Guineans practise cannibalism. Rugby-tackling a German player during a friendly game of soccer. And all of that before his April column about President Barack Obama criticizing the “part-Kenyan President’s ancestral dislike of the British empire.”

Accordingly, the reaction was swift and incredulous. The Daily Mirror, Britain’s left-leaning tabloid, put Johnson on its cover with the words “Dear world … sorry.” Abroad, German newscasters could not help sniggering as they delivered the news. Former Swedish Prime Minister Carl Bildt said on Twitter he “wished it was a joke.” State Department spokesperson Mark Toner could barely disguise a smile as he learned of the appointment.

So what’s behind the decision to insert a massive Johnson into this great office of state? Does May really expect him to be taken seriously by, for example, Turkey’s President Erdogan — recently the subject of an award-winning limerick by Britain’s new Foreign Secretary in which he is described as a goat-molesting “wankerer”?

It’s important to note firstly that the Foreign and Commonwealth Office (FCO) is not as powerful an office as it once was. Foreign policy has largely become the edict of the Prime Minister under leaders like Tony Blair, who saw himself as a head of state as well as the head of a government. Its remit has been watered down by other areas of government; for example the Department for International Development, which became its own ministry in 1997, is in charge of international aid.

And under Theresa May, the dominant issue of British foreign policy for at least the next five years — the matter of Britain’s departure from the European Union — will become the purview of newly appointed Secretary of State for European Union Relations David Davis. Another cabinet minister, Liam Fox, will oversee a whole new department overseeing international trade in the wake of the Brexit vote.

So it’s likely that under May the FCO will primarily dedicate itself to promoting British interests overseas, becoming a department better overseen by a salesman than a statesman. Which makes it the perfect place for Johnson, a man who easily makes up in charm for what he lacks in gravitas. He will be able to channel the patriotic spirit of his hero, Sir Winston Churchill, without having to fight any wars. It’s a job he pulled off with aplomb when he welcomed the world to London for the 2012 Olympics (zip line mishaps aside).

For May personally, the move also makes strategic sense. Although she and Johnson have never been close, he remains a highly popular figure among her party’s membership, despite questions about his commitment to the Brexit result and his ducking out of a leadership bid. Keeping him in the cabinet will placate the grassroots, as well as the rightwing of the party eager for the front bench to be stocked with Brexiteers.

This way May gets to keep a political nemesis close, but not that close. As Foreign Secretary, Johnson will be required to spend large amounts of time traversing the globe to gladhand ambassadors, attachés and other dignitaries. He is likely to be a more absent figure than other members of her cabinet.

Of course, the move has a huge potential to backfire. Johnson’s foot has an amazing propensity to find its way into his mouth, and it would not look good for May to have to deal with a diplomatic incident caused by her own Foreign Secretary. Much depends on Johnson’s ability to recast himself as a slightly more serious figure for his most senior and visible job yet.

He has at least recognized that he has some work to do. Asked by ITV if he owes anyone an apology for his amazing string of diplomatic blunders, he rather sheepishly answered: “The United States of America will be at the front of the queue.” 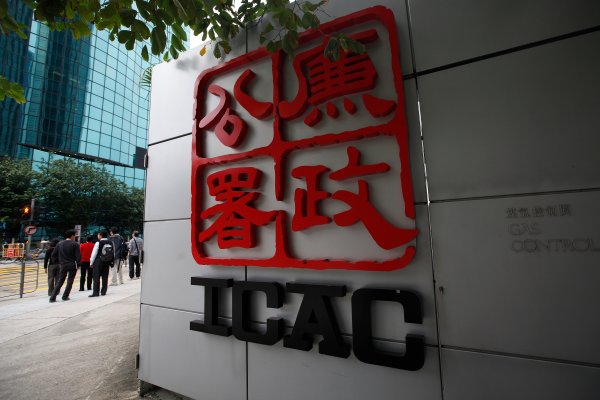 Hong Kong's Corruption Watchdog Is Turmoil
Next Up: Editor's Pick