Senator Tim Scott gave a powerful floor speech yesterday that he should not have had to give, and upon which every American should reflect.

The South Carolina Republican—one of two African American Senators—revealed that after five years in the Senate, a Capitol police officer challenged the authenticity of Scott’s official Senate lapel pin and required other identification. In a single year, law enforcement stopped Scott seven times for arbitrary reasons, including that his own car might have been a stolen vehicle.

“There is absolutely nothing more frustrating, more damaging to your soul, than when you know you are following the rules—and being treated like you are not,” Scott said.

Opportunistic politicians have added pain to the soul of our nation for too long.

John Ehrlichman, who did go to prison for his role in Watergate, gave this explanation for President Richard Nixon’s launch of the war on drugs: the Nixon administration “had two enemies: the antiwar left and black people…We knew we couldn’t make it illegal to be either against the war or black [sic], but by getting the public to associate the hippies with marijuana and blacks with heroin, and then criminalizing both heavily, we could disrupt those communities. We could arrest their leaders, raid their homes, break up their meetings, and vilify them night after night on the evening news.”

Following the killings of Alton Sterling and Philando Castile at the hands of police, protests have erupted around the country. Five white Dallas police officers were targeted and killed by a radicalized sniper who disrupted a peaceful gathering.

The growing unease around the country—too familiar on a daily basis for African Americans, but a revelation for many white Americans—is indicative of the real problem: a big-government approach to criminal justice threatens America’s foundational principles of equality and justice for all, and makes it impossible for law enforcement to do their jobs. When spending to lock up men and women has ticked up to three times the rate of spending to educate our children, something’s gone terribly wrong.

Missouri State Senator Shamed Dogan, an African American Republican, makes an eloquent and policy-driven case for why Republicans should push reforms that are pro-black, pro-law enforcement and pro-Second Amendment—and why the Right needs to acknowledge the problem.

“Conservatives have long been exasperated by President Obama’s refusal to utter the words ‘radical Islamic terrorism,’ recognizing that the first step in combating a problem is to properly identify it,” Dogan writes. “Black Americans feel the same way about the refusal of many white Americans to utter the words ‘racial profiling.’”

Republicans should have an agenda inclusive of all Americans, because a party failing to attract new voters is a dead political party. Presumptive nominee Donald Trump currently polls at six percent among African American voters—and zero percent in some swing states.

There’s an opportunity for Republicans to lead reform of the big-government criminal justice system that’s an affront to equality, limited government and the sanctity of family.

Republicans must hold Hillary Clinton accountable for her role in pushing her husband’s tough-on-crime agenda, which she then called “smart and tough.” “We need more police, we need more and tougher prison sentences for repeat offenders,” said the former First Lady, who is listed in Clinton-era presidential strategy memos as a key surrogate for the crime bill.

The bill championed by the Clintons funneled billions of dollars to local governments for instituting tougher crime policies and stricter sentencing, so even as violent crime declined, funding for federal prisons surged 171 percent, as documented by legal scholar Michelle Alexander. More prisoners would be incarcerated under the Clinton administration than any other administration. Today, 2.2 million Americans are behind bars—more than any other nation in the world. The government spends over $80 billion incarcerating its own citizens.

Conservatives should attack this wasteful policy protected by cronyism. Louisiana is ground zero of the problem, incarcerating 108 percent more inmates than any other state in the nation through tough sentencing laws. For example, a Louisiana man with a history of drug abuse stole $31 of candy and—because of prior non-violent convictions—faces up to 20 years in prison. The state hosted America’s largest prison convention this year, where companies hawked their products to state and local officials who can supplement meager budgets by charging commission on everything from commissary food to telephone calls. This profiteering is legal, and a drop in prisoners means less profit and fewer jobs.

Locking up a candy thief who is non-violent for an estimated $18,000 a year (the national average is $32,000) for 20 years is unlikely to solve the real problem—mental illness or substance abuse—but around 45 percent of state prisoners are there because of drugs or non-violent offenses. In federal prisons, the vast majority of inmates—46 percent—are there because of drug offenses, followed by weapons charges (16.9 percent) and immigration offenses (9 percent). Though studies demonstrate that whites and blacks break drug laws at similar rates, blacks nationwide are 3.7 times more likely—8 times in Iowa and Washington DC—to be arrested for marijuana possession than whites.

Criminal justice reform is a fight for conservatives who believe public policy should promote stronger families. The abasement of family is the saddest tragedy of government overreach. Nearly 2.7 million kids grow up without a parent because we lock up too many violent non-offenders. Among African Americans, that’s one of every nine children.

Families suffer, and police officers are caught in the crosshairs of this terrible public policy. “Seventy percent of the African American community is being raised by single women, let’s give it to the cops to solve that as well,” said Dallas Police Chief Dan Brown this week, expressing his frustration over the litany of societal ills thrust upon law enforcement. “Policing was never meant to solve all those problems.”

It’s time for Republicans to admit that the system is unequal and wasteful, and do something about it through a renewed emphasis on criminal justice reform. 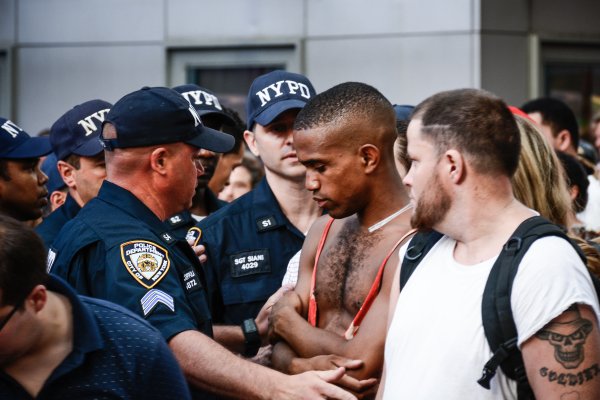 There Is Terror on Both Sides of the Badge
Next Up: Editor's Pick