The opposition-held section of the Syrian city of Aleppo is now effectively under siege, with potentially disastrous consequences for the five-year-old rebellion against the regime of Syrian President Bashar Assad.

Forces loyal to Assad captured a key area overlooking the last remaining road into the eastern section of Aleppo on June 7, meaning they can cut the only supply route into the city with sniper or artillery fire. Rebel authorities have stockpiled food and other supplies for months, but if the siege continues, opposition figures say 300,000 people could be at risk of starvation. “This could last for a very long time, thereby basically replicating some of the scenarios that we’ve seen in other areas in Syria like Hama in the past, in which the regime uses sieges and starvation as ways to break the populations in areas it is trying to control,” says Lina Khatib, the head of the Middle East and North Africa program at Chatham House in London.

Once Syria’s largest city, Aleppo has been emptied out by years of bombardment, but it remains the is the largest population center under the control of the mainstream rebel groups fighting both the Assad regime and extremist Islamic State militants. The encirclement of the city comes at a precarious moment for the rebels, who are also facing regime advances around Damascus. Government forces have been closing on the rebel-held town of Darayya, outside of the capital of Damascus. The antigovernment groups in control of the town have held out in spite of years of a starvation-inducing siege. According to the United Nations, some 600,000 people are living under sieges in various pockets throughout Syria, the majority of them under blockade by pro-regime forces.

The rebel-held section of Aleppo has now been added to the list of besieged areas, and that means no new supplies of food, medicine, and other vital supplies. It also means no relief for the tiny number of doctors serving a population facing fierce bombardment from pro-regime forces. As in other rebel-held towns, Aleppo’s physicians usually rotate in and out of the city, some of them crossing the border to Turkey when they are not working in overwhelmed emergency rooms. The hospitals themselves are also frequent targets for government airstrikes.

Read More: How Bashar Assad Is Trying to Win the Peace in Syria

“Now, whoever is in will stay in. Whoever is out will stay out,” says Mohammad Yasser Tabbaa of the Syrian Expatriate Medical Association, a group working closely with doctors in Aleppo. “There are several storage areas in Aleppo for medical supplies that can last for several months, but if the regime manages to target them, then there will be a real serious issue.” Opposition authorities say they are already working on opening new routes into the city. One scenario is that rebel groups from the nearby city of Idlib could break the blockade, but it remains unclear whether the armed groups have the capacity to do so.

The rebel groups that emerged from the popular uprising against Assad’s dictatorship in 2011 now face an existential threat. The rebels feel betrayed and abandoned by the Obama administration, which has offered some weapons and other support through a covert CIA-run program, but not enough to turn the tide of the war. In what the rebels see as the most recent act of abandonment in June, the U.S. military diverted air support from a group of fighters who had just captured land from ISIS in southern Syria, leaving the group, the New Syrian Army, to be defeated by the jihadists. The U.S. sent the warplanes to bomb an ISIS convoy retreating from the Iraqi city of Fallujah, and Defense Secretary Ash Carter later admitted the U.S. has “missed an opportunity” to beat back ISIS.

With the U.S. and other Western governments focused on battling ISIS and other extremist groups like the al-Qaeda-affiliated Nusra Front, the rebels are facing disaster. The deadly attack by ISIS on the main airport in Istanbul in June also threatens another major source of rebel support: Turkey. Ankara had been a staunch supporter of opposition groups, but a wave of bombings on Turkish soil means that Turkey could shift its priorities to battling the extremists, and away from aiding moderate rebels.

As the influence of more moderate and nationalist-leaning groups wanes, Nusra has grown dramatically, taking in more than 3,000 fighters since February alone, according to a recent report from analyst Charles Lister of the Middle East Institute. Nor does it help that U.S. Secretary of State John Kerry is reported to be exploring coordination of air strikes with Russia. According to the Washington Post, the proposal is designed to allow the two countries to more effectively target ISIS and Nusra. The rebels and some observers see the move as a capitulation to the Russia, which is a key supporter of the Assad regime.

“They’re playing hardball, because they think the more hardball they play the more they’re going to get, and it’s happening,” says Emile Hokayem, a Syria analyst at the International Institute for Strategic Studies, referring to Russia. “The U.S. unintentionally is making things worse.”

If the siege of Aleppo continues, it could devastate Syria’s mainstream rebel groups, but it does not mean the Assad regime would decisively win the war. Jihadist groups would continue to fight on. Kurdish forces would maintain their hold on part of Syria. And individual rebel fighters would also continue to fight, but in a more diffuse, less organized way.

“Even if the siege manages to break rebel groups as we know them, it will not put an end to insurgent activities against the regime. This means the transformation of tactics among Syrian rebels from operating in organized groups to operating as insurgents,” says Khatib. 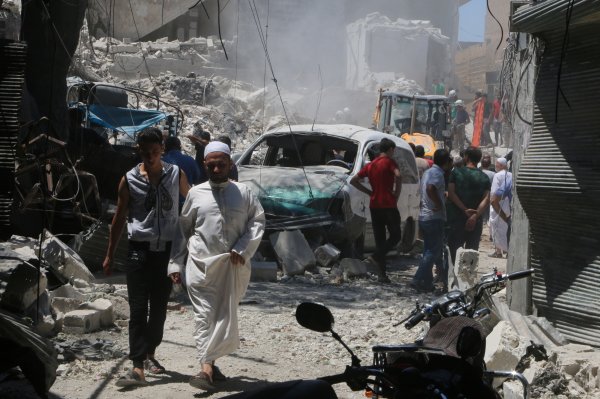