Kareem Abdul-Jabbar: There Is Terror on Both Sides of the Badge

Michael Weferling interacts with NYPD officers during a march in New York on July 7, 2016.
Pacific Press/LightRocket/ Getty Images
Ideas
By Kareem Abdul-Jabbar
Abdul-Jabbar is a six-time NBA champion and league Most Valuable Player. He is the author of the new book, Writings on the Wall.

I’ve often explained my passion for history to my friends by quoting American philosopher George Santayana: “Those who cannot remember the past are condemned to repeat it.” The events of the past have the power to guide us to correct our failings so we don’t reprise the same painful mistakes. That simple concept of not drinking from the same carton of sour milk twice is the foundation of civilization as well as of personal spiritual growth. Countries that don’t adhere to this die out and individuals who ignore it die off.

Yet, here we are again.

More shootings. More dead bodies. More outrage. More finger-pointing. Like a grotesque Quentin Tarantino version of Groundhog Day in which we are trapped in the same horrific day, experiencing the same violent atrocities over and over. Our only hope for release from this loop of lunacy is to learn how to display our virtuous humanity.

Except that yearned-for release never comes.

And we battle-weary survivors are left wondering whether we’ll ever be capable of displaying that virtuous humanity. Because the only way to break this ugly cycle of violence begetting violence is to honestly examine the obvious pattern of causes, without defensive posturing. Without looking for scapegoats to assuage our fear and anger. Without denying our own complicit and complacent guilt.

I take great pride in the fact that my grandfather and father were both dedicated law enforcement officers. They spent their lives putting the needs of the community over their own needs, sometimes at the risk of their lives. So I am especially reluctant to throw blanket accusations without a thorough investigation—in the same way that, as an African American, I am reluctant to throw blanket accusations based on ethnicity. I don’t endorse mob justice or vigilante violence. Lynching is lynching, whether it’s in the press or in the streets.

Killers are not freedom fighters. When a person picks up a gun with the intention of going on a murder spree—whether it’s in Orlando or Dallas—he’s not striking a blow for justice. He’s actually expressing the opposite sentiment: that he’s abandoned all hope of justice and is committing a meaningless act of frustration. He’s not defending people or moral principles. He’s selfishly venting his own anger. Nothing more.

While it’s important for authorities, human rights organizations, and people on the street to condemn such acts of violence, it’s also important that we get past our rage and disgust to examine these acts in context so that we might prevent them in the future. Part of that context is the fact that the recent police killings of Philando Castile and Alton Sterling, the 135th and 136th African Americans to be killed by police in the U.S. in 2016, according to a count kept by the Guardian, has revived the fears of all people of color. The bright hopes for meaningful change that followed the massive protests after the deaths of Michael Brown, Freddie Gray and Eric Garner have been dashed. In fact, things seem to have gotten even more dangerous. According to a study by the Washington Post, in the first six months of 2015, 465 people were shot and killed by police; in the first six months of 2016, 491 people were shot and killed by police. Twenty-six additional dead. According to that Post database, African Americans are shot 2.5 times more often than whites (though a Harvard researcher recently found evidence for racial bias in use of all kinds of police force except shootings), and the number of black women being killed is on the rise. Police rightfully point out that in half those deaths, the perpetrators fired their guns first. Officer deaths in the line of duty are also up in that same time period: 20 killed in the first six months of 2016 versus 16 in the same period of 2015.

But to those living in fear of the patrol car, police may seem like uniformed terrorists. If endless peaceful rallies across the nation protesting police violence against people of color result in the deaths of even more people of color at the hands of the police, some people will give into their rage against injustice. Watching live-streamed video of what looks like police shooting with no justification Philando Castile and hearing the governor of Minnesota describe the shooting as the result of racial bias creates an atmosphere of blacks feeling as if the country sees their skin color as a color of a target’s bull’s-eye. Whatever the reality, the perception is that no one is listening or, if they are, they don’t care. That despair is confirmed by a Pew poll that shows that half of whites don’t believe blacks are treated unfairly by police, despite numerous studies that indicate otherwise. Despite the videos. Despite the body count.

That perception is bolstered by a bumper crop of what Billie Holiday called “strange fruit” out there: dead people of color who seemingly did not deserve to die and whose main crime seemed to be Breathing While Black. To some cops, color means criminal, and because there is no cessation of excessive force from these officers sworn to protect the public, the part of the public with color in their skins must live in fear that at any time they may be unjustly killed. Which is the definition of terrorism. Eventually, the terrorized feel hopeless and, right or wrong, hopelessness leads to violence.

Without quick and substantive changes to police department training and protocol, Dallas could be an opening salvo for the demoralized demented. Hours after the Dallas slayings there seemed to be some Dallas-inspired shootings. A black Tennessee sniper shot at passing cars and a patrol car, killing one and injuring 3 others. He claimed he was angry about violence against blacks. In Georgia, a man called police feigning an emergency, then shot the officer who responded. These are also terrorists, whose impotent acts have no effect beyond fear. And mourning.

The most insidious of the domestic terrorists aren’t the snipers or police assassins, but the politicians who are accomplices to murder by refusing to pass reasonable gun-purchasing restrictions, that a majority of Americans agree with, into law. Instead, they take donations from the gun lobby because they know they will never be personally at risk by showing up at any place where mass public shootings take place: dance clubs, schools, Black Lives Matter rallies. On June 23, Senate Majority Leader Mitch McConnell tabled a bi-partisan bill to prevent terrorists from buying guns. This followed a sit-in by Senate Democrats anxious to pass gun control legislation after the Orlando massacre. McConnell then set up a vote for an alternative that the National Rifle Association didn’t object to, which had no chance of passing. Final result: Nothing happened. If we stood with the people of Kentucky, encouraging them to pressure McConnell to quit his obstructionist behavior, we would be sending a message to Congress to act now on our behalf or lose their jobs at the next election.

There are two heroes of this tragedy. First, those conscientious police who are doing everything they can to institute serious changes as quickly as possible. Given the resistance they face from some politicians and members of their own departments, it’s like trying to reverse the rotation of the Earth. Yet, they push on. Part of the problem is inbred racism within departments. Another part is funding. According to a joint report from Frontline and the Washington Post, Los Angeles spent an estimated $300 million on reforming the department after an anti-gang squad was accused of beating and framing people. In 13 other police departments, the cost of reform has risen to $600 million and taken years to implement. And the report card on the effectiveness of all this modernization, retraining, and reform is mixed: five of the ten departments had increased incidents of force by officers, while five stayed the same or decreased.

Frustrated with the actions of some of her fellow police officers, Warrensville Heights, Ohio, police officer Nakia Jones posted a video that has more than 7.5 million views: “How dare you stand next to me in the same uniform and murder somebody….If you’re afraid to go and talk to an African-American female or a male, or a Mexican male or female because they’re not white like you, take the uniform off!” Expressing his fear that the revolving door of police killings might dehumanize us, Dekalb County, Georgia, police chief and member of the White House Task Force on 21st Century Policing, Cedric Alexander, told the Washington Post, “Are we becoming anesthetized to these violent events? Are they happening so often we no longer feel moved?”

Police reform needs to happen much more quickly than it has been, before we see another breaking news bulletin with a bloody black body slumped in death, and a white uniformed police officer standing over him. And that requires the rest of us—private citizens and politicians alike—to put pressure on those hiding behind bureaucracies and buck-passing.

The other heroes to emerge are the relentlessly committed members and supporters of Black Lives Matter. They show up day after day, in city after city, getting their message across peacefully, articulately, and with grace. Black Lives Matter organizer Deray McKesson was arrested, along with 120 others, while leading a peaceful protest down a road in Baton Rouge after the killing of Alton Sterling. They were charged with obstructing a highway, though many of the detained claimed they were on the side of the road. Even if they weren’t indeed obstructing, the fact that the local sheriff’s office responded with this bullying lack of sensitivity shows how stuck in that Groundhog Day-ja-vu of doom we really are. We’ve seen it all before in Selma, in Chicago, in Watts, in Harlem, in Baltimore.

In the end, both the police and the protestors who are championing reform will have a greater impact on ending racism than a dozen mass shootings. These men and women embody the displays of virtuous humanity that just might free us from this cycle of violence. 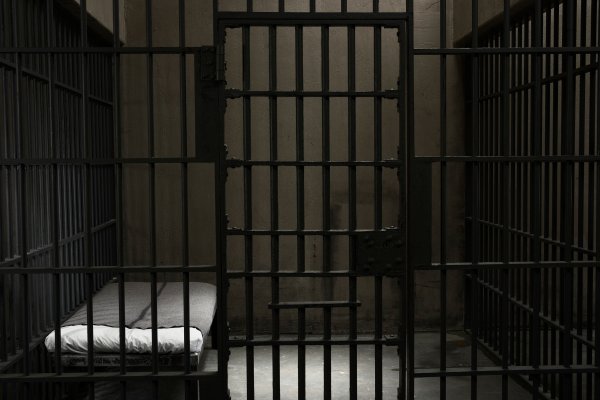 How I Helped Raise My Kids From Prison
Next Up: Editor's Pick