From the day it was announced in 2014, the all-female reboot of Ghostbusters has been criticized, in certain corners of the Internet, for the very fact of its all-female-ness. As soon as director Paul Feig confirmed the cast, a small but vociferous cabal of trolls rose from the depths of the Internet to express their dismay.

Katie Dippold, who co-wrote the script with Feig, experienced many flavors of sexism as one of the chief targets of the backlash, and all before she’d even written a word of dialogue. But the most memorable was a cry of condescending concern delivered so sincerely it was almost—almost—sweet.

“This guy was so legit concerned for us,” Dippold recalls. “He was like, ‘Listen, I am not sexist. I’m telling you, I’m just worried, because women just can’t handle that kind of comedic dialogue and action.’ He was so worried for us. That made me laugh so hard.”

After two years of intense debate, Dippold, who also wrote the 2013 Feig-directed, McCarthy-starrer The Heat, is relieved that audiences will finally have the opportunity to see the finished product when it opens on July 15. To those who couldn’t fathom following up the 1984 classic with a gender-flipped reboot, she says, “People argued about it for two years, and now it’s like, OK, here’s the movie. You can like it or not like it.”

Dippold acknowledges that the debate around the reboot fell largely into two distinct but overlapping camps. The first consisted of longtime fans of the original film who feared a new installment would add little to the franchise, and perhaps even tarnish its legacy. Many of these detractors would prefer a sequel (well, a second sequel), though it’s been made clear that’s as likely as a slime stain coming out in the wash. The second camp consisted mainly of misogynistic noise.

The latter group, Dippold says, was in some ways easy to tune out. Referring to stars Kristen Wiig, Melissa McCarthy, Leslie Jones and Kate McKinnon, she says, “I think we’re beyond them being funny females. These are powerhouse comedian gifts of a lifetime.” But given that the clamor started even before Dippold and Feig began hashing out ideas over an endless cycle of coffee and emails, she admits that some of it may have seeped into her subconscious.

“I’d be writing and look at the Internet comments and then go back to writing,” Dippold says. It was always Feig and Dippold’s idea to have Wiig’s character Erin Gilbert, a tenure-track Columbia physicist whose career is threatened by her previous paranormal pursuits, be concerned with external validation. But the writers’ desire for the same may be wrapped up somewhere in Erin’s own subtle desperation.

The sexist reaction to the film is also present in the finished product in more explicit ways. When the Ghostbusters read the YouTube comments beneath one of their first paranormal hunting videos, one declares, “Ain’t no bitches gonna hunt no ghosts!” (Dippold confides that the original line, which will sound familiar to anyone who has perused online comment sections, was “I wanna slap dem with dis dick.”)

But even as Dippold and Feig found ways to both ignore and address their gender-obsessed critics, Dippold found herself relating more easily to the other camp of detractors because she shares something in common with many of them: she’s a serious fan of the original Ghostbusters. This translated into two objectives with regard to the new script. First, allow the original characters to exist as director Ivan Reitman left them after Ghostbusters II in 1989: exalted and untouched. And second, find as many ways to pay tribute to them and their spectral milieu as could work within the new story.

Dippold and Feig understood that there would likely be as many critics if they included too many references to the original (as indeed there have been) as there would be if they took the opposite route. “At the end of the day, it’s like, dammit, I just want to see Slimer again on a big screen,” she says. “It was kind of wish fulfillment for us as fans to see those things and all those people again.”

As for the rest of it, Dippold has just one thing left to add to the conversation: “The movie is the response.” 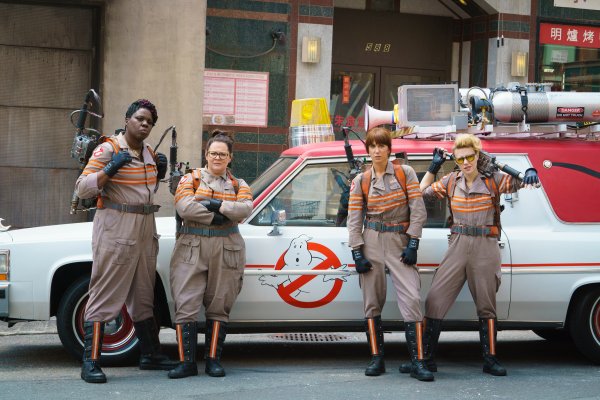 A Brief History of Real Ghostbusters
Next Up: Editor's Pick