What Happened the Last Time the Republican Party Convened in Cleveland

As the Republican National Convention gets underway in Cleveland this week, 80 years have passed since the last time the GOP met in the Ohio city. And, though a lot has changed since then, the political carnival atmosphere of a convention has endured.

The situation going into the last Cleveland GOP convention was thus: Franklin D. Roosevelt, a Democrat, was just finishing out his first term, but while he had begun to combat the Great Depression with his slate of New Deal programs, it wasn’t yet clear whether that momentum would stick. The Supreme Court had already objected to much of the fundamental logic behind the New Deal—a situation that is generally thought to have endured until 1937—and nobody could know that Roosevelt would be reelected a record number of times.

The Cleveland convention was a chance for the Republican Party to turn things around.

The main challengers for the nomination were William E. Borah, an Idaho Senator, and Alf Landon, the Governor of Kansas and the eventual nominee. Landon, however, did not attend the convention. As was not unusual at the time, he stayed at home in Topeka and waited to hear the results. John Hamilton, his campaign manager, was there to read aloud his messages to the convention.

Landon was perceived, per TIME’s pre-convention coverage, as the front-runner, but also as a too-liberal threat to Republican ideals. Landon expressed the idea that, contrary to what the Supreme Court had held, it could be constitutional to establish labor regulations like minimum-wage laws—and that if the court didn’t agree, a constitutional amendment might be necessary.

And yet there remained no question that the GOP was against the New Deal. TIME summed up the “great unwritten plank” of the Republican Party thus: “That the New Deal was a menace to American institutions. That it planned the destruction of individual opportunity in the name of social opportunity. That the planned economy which the New Deal envisioned, the bureaucracy it created, would inevitably lead to some sort of dictatorship.”

However, the ways in which Landon’s views might have affected the progress of recovery from the Depression was never to be revealed. Roosevelt won that year in a landslide. 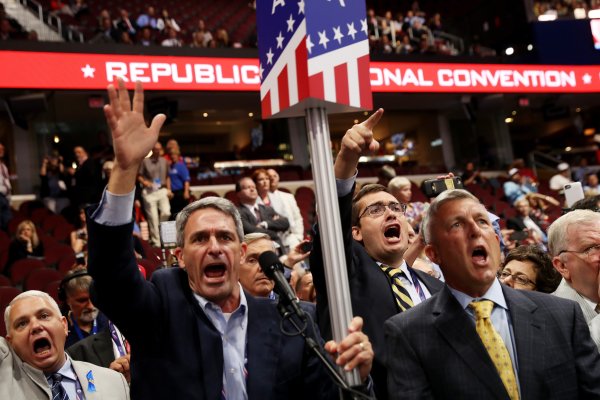 Don't Expect Details From Donald Trump at the Republican Convention
Next Up: Editor's Pick