A viral photo of a woman being arrested while protesting police brutality in Baton Rouge, La. on Saturday has become an iconic portrait of the national debate over racial disparities in policing.

The woman, who has since been identified as Ieshia Evans, stands still, her arms crossed, while two officers in riot gear rush toward her.

This video, made from a series of photos, depicts her arrest.

“You can take images of plenty of people getting arrested, but I think this one speaks more to the movement and what the demonstrators are trying to accomplish here in Baton Rouge,” said photographer Jonathan Bachman in an interview with BuzzFeed. He took the photo while on assignment for Reuters, and he described the interaction as peaceful.

Hundreds of protesters were arrested in Baton Rouge during the weekend, as they protested the fatal shooting of Alton Sterling by police officers. 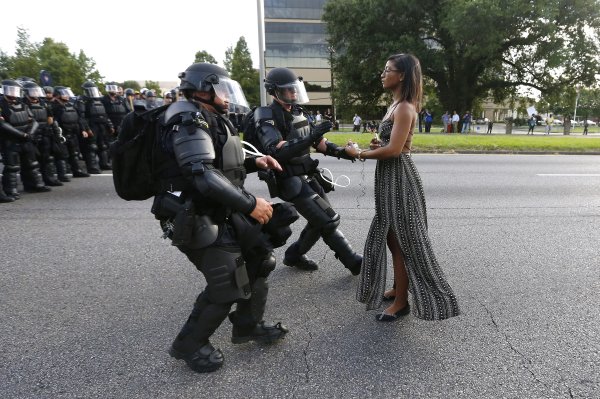