At a memorial service Tuesday for five police officers killed in an ambush during a protest in Dallas last week, President Obama said that Dallas was “suffering” but that the city and the nation would ultimately “persevere.”

“We know that suffering produces perseverance. Perseverance, character, and character, hope,” Obama said, referencing Scripture. “Right now those words are tested because the people of Dallas, people across the country are suffering.”

Obama called the names of each of the five victims of the Dallas shootings: Brent Thompson, Patrick Zamarripa, Michael Krol, Lorne Ahrens and Michael Smith. He noted their lives as family men and remarked that the fallen officers had a shared commitment to protecting the nation. Last Thursday, Obama said each of the men had done their duty in protecting citizens during a peaceful protest — even though there were likely slogans, chants and signs with which they did not agree — only to be gunned down in an act of “not just demented violence, but of racial hatred.”

“All of it has left us wounded and angry and hurt,” Obama said, noting the shootings of two black men, Alton Sterling and Philando Castile, by police officers that also occurred last week.

Obama said that though he’s sure the events of the past week have sowed division in the U.S., America is not as divided as it seems. “And I know that because I know America. I know how far we’ve come against impossible odds,” he said, noting his own rise attests to that.

Given the events of the past week, the President used his remarks to console not just Dallas, but the nation. He spoke the names of Sterling and Castile, saying that “even those who dislike the phrase ‘Black Lives Matter’ should be able to hear the pain of Alton Sterling’s family.” For over 30 minutes, President Obama argued both sides of the national debate about police brutality, racism and the burdens placed on officers in the line of duty. As a country, he said, we expect law enforcement to police neighborhoods where schools are underfunded, parents are absent, guns are prevalent, and drug and mental-health treatments are nonexistent. At the same time, Obama said, as a country we have to recognize that the racial bias that sparks shootings and begets protest is real and should not be ignored.

“If we cannot even talk about these things honestly and openly … we will never break this dangerous cycle,” Obama said. “It is not about finding policies that work; it’s about forging consensus, fighting cynicism and finding the will to make change.”

Bush, who lives in Dallas, spoke at the memorial service and said the city has experienced “five deaths in the family.”

“With their deaths we have lost so much,” he said. “We are grief-stricken, heartbroken and forever grateful.” Bush called for a renewed sense of unity in the wake of the shootings.

“Too often we judge other groups by their worst examples but judge ourselves by our best intentions,” he said.

As Americans, Bush said Tuesday, “we have never been held together by blood or background. We are bound by things of the spirit, by shared commitments and common ideas.”

Most Popular on TIME
1
Officer Fired After Mishandling Photos of Slain Utah Student
2
How COVID-19 Changed the 2020 Election
3
U.S. Woman First to Get Second Face Transplant 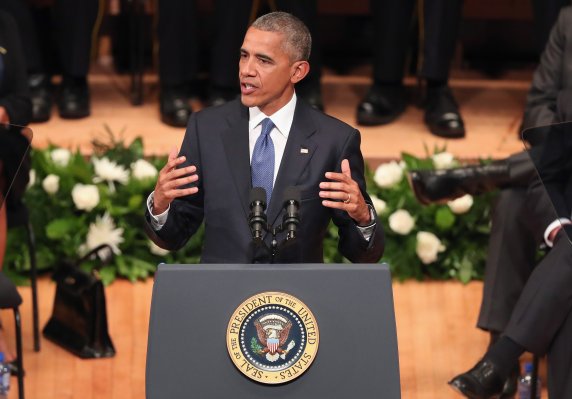