You Asked: Why Are Cockroaches So Terrifying?

You’re minding your own business, cleaning your bathroom, when an unwelcome guest scuttles out of nowhere. Few among us wouldn’t recoil in disgust—or flat out run away—from the dreaded cockroach.

And why shouldn’t we? Roaches are big and slick and thrive in the dank, dark areas of our homes that most of us find repellent.

Cockroaches have also been around since the age of the dinosaurs. Their apparent indomitability adds another layer to their creepiness: evidence suggests that roaches can survive nuclear fallout.

But in terms of the danger they pose to human health, our response to cockroaches isn’t rational, says Jeffrey Lockwood, a professor of ecology at the University of Wyoming. Lockwood is the author of The Infested Mind: Why Humans Fear, Loathe, And Love Insects. While us non-entomologists would probably circle only the first two verbs in that book title, Lockwood says our aversion to insects is in part the product of nurture, not nature.

“Small kids have this inclination to approach and look closely at insects,” he says. But growing up in America, where insects are viewed as unwelcome nuisances at best and, at worst, revolting carriers of disease, most kids learn quickly that “bugs” are baddies to be swatted or squashed.

The notion that fear is in some ways learned isn’t hard to prove. On a list of common phobias, clowns hardly would have charted before the release of Stephen King’s It. At the same time, people today don’t worry much about quicksand, while 50 years ago many Americans would have been wary of the stuff during a walk in the woods.

But while our fear of roaches may be out of proportion with the risks they pose, Lockwood says our dislike of them isn’t wholly absurd.

There are roughly 4,600 species of cockroaches around the world, and some species carry allergens, including those that trigger asthma, he says. Roaches can also transport sickness-causing bacteria, though the CDC says there’s “little evidence” linking them to disease outbreaks.

Still, when it comes to insects that can hurt you, roaches rank pretty low. “You could make the argument mosquitoes are the deadliest animals on the planet apart from people,” Lockwood says. “But of course we don’t respond to mosquitoes the way we do to cockroaches.”

So what is it about roaches that so thoroughly freaks us out? Many of a cockroach’s traits trigger what Lockwood calls our hardwired disgust reflexes. “Fear and disgust are the two universal negative human emotions,” he explains. “One signals immediate danger, and one signals the potential for disease or contamination.”

If those two emotions form a Venn diagram, cockroaches would scurry inside the area of overlap. “Cockroaches are oily and greasy, which is a real signal for disgust,” Lockwood says. “Also, if you step on one, there’s the crunch—which is disgusting in own right—and that’s accompanied by a whiff of dirty urinal.” Yes, roaches literally stink: they store uric acid in their bodies, which is a major component of human urine.

“Then there’s the whole skittering thing,” he says. While many winged insects are quick, cockroaches—for their size—are probably the fastest land creatures on Earth. One experiment clocked an American roach moving at nearly 3.5 miles an hour. (That’s the equivalent of an adult human running faster than 200 miles-per-hour.) Like those horror movies where the ghoul crosses the room in an instant, cockroaches startle us with supernatural swiftness, Lockwood says.

Add to this the roach’s sneakiness—its desire to avoid detection, even as it invades our most personal spaces—and you have a creature with a long list of characteristics that human beings find distasteful.

“I’m skeptical of the idea that people have innate fears,” Lockwood says. “But certainly some things are easier to learn how to fear, and cockroaches are one of them because they touch on all these predispositions.” (On the flip side, he says it would be pretty darn difficult to convince people to fear bunnies or puppies, even if we learned tomorrow that both could transmit terrible diseases.)

Knowing all this probably won’t make much difference the next time a cockroach catches you off guard. But hopefully it’ll help you remain calm while you wait for the exterminator to show up. 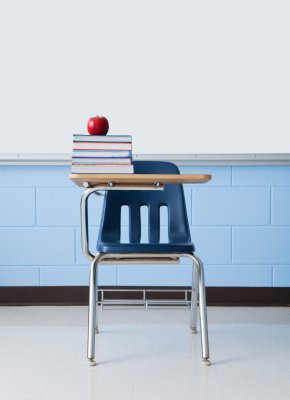 Stress Is Contagious In the Classroom
Next Up: Editor's Pick