David Cameron Leaves Office With the U.K. Unstable and Uncertain

On Tuesday morning David Cameron was “banged in” to his 215th and final cabinet meeting. On Wednesday, he will answer questions as Prime Minister for the last time. Then he will travel from the House of Commons to Buckingham Palace and formally hand Queen Elizabeth his letter of resignation. Already the removal vans are busy in Downing Street, packing up his belongings. Theresa May will be Prime Minister by sundown on Wednesday. When British politics moves, it moves awfully quickly.

May paid tribute to Cameron on Tuesday, noting that he had “led the country through a difficult time” and “always put the country first”. She was perhaps too polite to observe that Cameron has left the country in a difficult place, not least because on the final, largest question of all, he was compelled to put the interests of his party before those of his country.

Britain’s decision to leave the European Union is Cameron’s greatest legacy. It is not one he would have chosen as the epitaph for a political career that, at the age of just 49, is already all but over. A favourite British political adage holds that all political lives end in failure, but few failures are quite as complete, or lonely, as this.

If, as the Brexit lobby insists, leaving the E.U. opens a way to a greater, brighter, future, Cameron’s place in history will be a minor one. But if, as seems more probable, Brexit leads to years of constitutional, economic, and political uncertainty Cameron will be remembered as the Prime Minister who risked everything on a single, unnecessary, roll of the dice and lost it all. He will be remembered as the Brexit Prime Minister, a latter day Lord North whose career is defined by a single event just as North is recalled for nothing more these days than losing the colonies that would become the United States.

So, after more than a decade as leader of the Conservative party and six years as Prime Minister, does it really amount to just this? Yes it does. All Cameron’s accomplishments and successes seem trivial when set beside the enormity of the decision that ended his career. He lost control of his party and, in doing so, the country too. If this is a shipwreck, the captain has little choice to go down with his ship. There might be honour in that but it’s a cold sort of honour.

But then Cameron’s appeal always rested on the vague sense that he, a blue-chip product of Britain’s blue-chip establishment, could be trusted to do the decent thing. You might not warm to him, but he looked and sounded like a Prime Minister and carried the burdens of office lightly. In that sense, this son of Eton and Oxford was a throwback Prime Minister, a member of the officer class that assumed its prerogative to govern because, well, because that’s what chaps like him do.

Judged on his own terms, Cameron’s ministry must be reckoned a dismal failure. He was elected in 2010 in the aftermath of 2008’s great financial crisis on a promise to restore stability to the national finances. A pledge to eliminate a deficit that, at the height of the crisis touched 11% of GDP, within five years was swiftly abandoned as it became clear doing so would require eye-watering cuts in public spending. But while budgets for the National Health Service and international development were safeguarded, other government departments were still required to make drastic savings. Austerity was both a choice and a necessity even as government debt continued to rise on Cameron’s watch. Economic recovery was a long, slow, grind: unemployment fell but living standards stagnated. Britain grumbled throughout Cameron’s premiership, making an earlier pledge to “let sunshine win the day” seem desperately hollow.

Europe, which had ruined the careers of Margaret Thatcher and John Major, continued to cast a baleful influence. Ever since the Iron Lady’s defenestration in 1990, the Tory party has been divided on the European question. Cameron hoped to pacify his internal critics by promising a referendum on E.U. membership, never thinking it was a plebiscite he might actually lose. But more than a third of his parliamentary party backed Brexit and more than half the Tory vote in the country at large did so too.

If the E.U. had long been an unloved project in Britain, it was immigration that brought this discontent to the boil. Cameron was elected on a pledge to bring net migration down to 100,000 people a year. It was a target missed every year. Last year, official figures showed that 330,000 people moved to the U.K., many of them from other E.U. countries. The free movement of people, guaranteed by the E.U., became a millstone for Cameron. Asked to choose between “controlling” Britain’s borders and retaining membership of the European single market, the people opted for border control. Paradoxically, the open, deregulated, nature of the British economy that made the U.K. such an attractive destination for “new” Europeans from Poland and other Eastern European states became a strength that crippled Cameron.

Internationally, too, Cameron’s record is less than impressive. His single greatest contribution to foreign affairs was his backing for military action in Libya, a mission that, while successful in toppling Colonel Gaddafi’s regime has brought little peace and, consequently, helped contribute to a refugee crisis that the E.U. has signally failed to cope with. The memory of that misadventure, coupled with the ghosts of Iraq, helped ensure Cameron lost a vote to take action in Syria too. Wise or not, that strengthened the notion Britain’s role in the world — a keenly-examined barometer of the national mood — was smaller than ever. Brexit, for some anyway, merely confirms the sense of national retreat.

How different it all once promised to be. Cameron was a surprise choice as Tory leader in 2005. But he had grasped an essential truth: the Conservative party could not pretend that Tony Blair’s three crushing election victories happened by accident. Britain had changed, so the Conservative party — which exists to be in power — must change too. That demanded it accommodate itself to changing times. Cameron would lead a different kind of Conservatism, economically robust but socially liberal. A nicer, cuddlier, more humane party. This reached its zenith when Cameron backed legislation legalising gay marriage not in spite of being a Conservative but “because” he was a Conservative.

Cameron’s liberal instincts made it easy for him to capitalise on the hung parliament in 2010 and form a coalition government — the first since the Second World War — with the Liberal Democrats. Stable government was plainly in the national interest and came with the benefit of marginalising Cameron’s critics on the right-wing of the Tory party. The Liberal Democrat Party were Cameron’s shield against his own party.

But winning a majority — against the odds — in 2015 changed everything. Suddenly Cameron has no place to hide. He had pledged to “renegotiate” Britain’s membership of the E.U. and hold a referendum on the outcome; now he has to cash this cheque. And that proved his ruin.

And yet, paradoxically again, Cameron leaves office with the Conservative party in markedly better shape than any of its largest rivals. The Liberal Democrats were punished for their part in propping up Cameron’s first government. Then, in 2015, Labour reacted to its own shattering defeat by moving sharply to the left, electing Jeremy Corbyn leader and, in all probability, ensuring their own destruction at the next election. It is remarkable that, with the Tory party split in two, a limping economy, and the greatest constitutional crisis in living memory, the Conservatives are still seven points ahead of Labour in the polls. Theresa May, Cameron’s successor, has the chance to capitalise on this if she chooses.

In that sense, Cameron’s rehabilitation of the Tory “brand” can be judged some kind of success. The Conservatives are the masters once again, the party that will govern Britain more often than not. Perhaps Cameron was just a lucky general but even lucky generals fight one battle too many. Even so, despite his strategic failures he could, in this narrow sense, be considered a tactical success. It is a strange thought to hold right now, but British politics is a strange arena these days.

Even so, if Cameron’s own dire predictions for post-Brexit Britain prove accurate, he leaves office in quiet disgrace. A decent man who failed; an officer now cashiered by history and his own misjudgements. A Prime Minister who was there in body but whose achievements seem as fleeting as summer blossom; a leader who won small battles but lost the largest of them all. 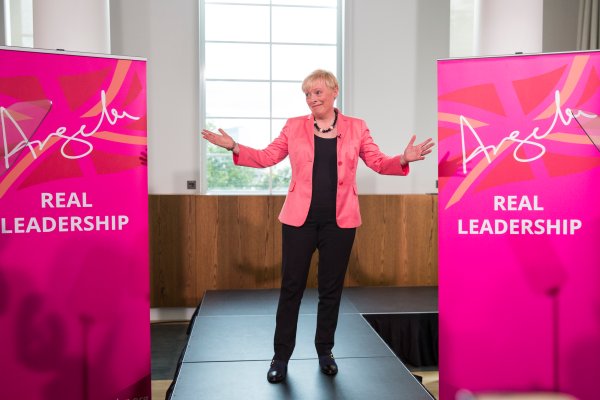 Everything You Need to Know About Angela Eagle, the Challenger for the Leadership of the U.K. Labour Party
Next Up: Editor's Pick