For all the invective that the Chinese hurled at the five men ruling on China’s South China Sea claims — Actors in a “political farce!” “Law-abusers” who wanted to “worsen disputes and destabilize the situation!” A “suspicious” panel led by a lowly official of the former British empire! — the members of the international tribunal in the Hague appeared unmoved by Beijing’s broadsides. On July 12, the Permanent Court of Arbitration (PCA) unanimously ruled that many of China’s claims to the South China Sea had “no legal basis.” The tribunal specifically rejected China’s assertion of historic rights to the vital waterway through a so-called nine-dash line demarcated on Chinese maps, which scoops out nearly all the sea as its own.

Chinese state media responded to the long-awaited ruling with an immediate diatribe. “Law-abusing tribunal issues ill-founded award,” went a tweet from state newswire Xinhua. International network coverage of the panel’s decision was intermittently blocked from Chinese airwaves. In a follow-up, Xinhua labeled the tribunal, “illegal and ridiculous.” A statement from the Chinese Foreign Ministry issued after the PCA award said: “China is the first to have discovered, named, and explored and exploited [the South China Sea islands] and relevant waters, and the first to have exercised sovereignty and jurisdiction over them continuously, peacefully and effectively, thus establishing territorial sovereignty and relevant rights and interests in the South China Sea.”

In 2013, the Philippines lodged a case against China with the PCA questioning Beijing’s vast claims over the contested South China Sea, through which more than $5 trillion in trade passes each year. China’s nine-dash line overlaps not only with the Philippines’ claimed waters but also laps near the coasts of Malaysia, Brunei and Vietnam. In total, Beijing’s South China Sea claims conflict with those of five other governments, including that of Taiwan. The nation’s footprint in the resource-rich expanse has grown far bigger over the past couple years as China converted most underwater reefs into islands large enough to welcome fighter jets and house missile batteries. The result has been to fill the South China Sea with Chinese de-facto military bases in waters where fishermen from various nations once roamed.

Manila decided to pursue international arbitration after China seized effective control of Scarborough Shoal, which is located fewer than 200 nautical miles from the Philippine capital, Manila. The suit was accepted by the PCA last October, and it tackled 15 separate issues. Among other questions, lawyers representing the Philippines asked the tribunal to rule on the legality of the nine-dash line. Beijing has maintained strategic ambiguity about what exactly the demarcation means — is it just the bits of land within the line or is it all waters inside the dotted boundary?

But either way, China’s attachment to the nine-dash line is based on so-called “historic rights,” which the Philippines argued are not applicable in deciding ownership of the South China Sea. The PCA agreed with the Philippine position. “The Tribunal concluded that there was no legal basis for China to claim historic rights to resources within the sea areas falling within the ‘nine-dash line,’” said a PCA press release on the panel’s judgement.

Crucially, the Philippines’ lawyers urged the Hague court to define the precise nature of the bits of sand, rock and reef in the South China Sea’s Spratly archipelago. Definition is key because only naturally formed islands that can support economic and human life give governments an “exclusive economic zone” of a maximum 200 nautical miles of surrounding waters, including all oil, seafood and other underwater resources. Bits of reef that poke out during high tide are eligible for 12 nautical miles of territorial sea. Atolls that remain submerged during high tide qualify for no economic privileges at all. Even if China has dredged sand and coral to turn reefs into islands bristling with military hardware, the Philippines maintained in their PCA case that the Spratly features under Chinese control were, at most, high-tide elevations, not naturally formed islands.

In its July 12 judgment, the tribunal “concluded that none of the Spratly Islands is capable of generating extended maritime zones,” according to the PCA press statement. The arbitration panel also ruled that “having found that none of the features claimed by China was capable of generating an exclusive economic zone, the Tribunal found that it could — without delimiting a boundary — declare that certain sea areas are within the exclusive economic zone of the Philippines, because those areas are not overlapped by any possible entitlement of China.” In other words, certain Chinese-controlled outposts in the South China Sea are within waters that the Philippines can claim as its own. It’s hard to imagine an international court judgment more damning to Beijing’s maritime ambitions.

Lawyers for Manila had suggested in their submissions that Chinese activity in waters claimed by the Philippines harmed the environment and that Chinese maritime authorities prevented Philippine fishermen from pursuing their livelihoods. The tribunal again agreed, deciding that, “China had violated the Philippines’ sovereign rights in its exclusive economic zone by (a) interfering with Philippine fishing and petroleum exploration, (b) constructing artificial islands and (c) failing to prevent Chinese fishermen from fishing in the zone.” The tribunal further “found that China had caused severe harm to the coral reef environment and violated its obligation to preserve and protect fragile ecosystems and the habitat of depleted, threatened, or endangered species.”

For more than three years, China boycotted the entire proceedings, arguing that the PCA had no jurisdiction over the case and that the Philippines had promised to negotiate directly with China rather than resort to an international tribunal. But major powers urged China to hew to the panel’s judgment, which is binding and cannot be appealed. Still, the court’s decision is not enforceable. Nor will China dismantle its newly constructed islands in the South China Sea. In addition to Chinese state media’s battle of words against the PCA, the Chinese People’s Liberation Army engaged in live-fire drills in the northern part of the South China Sea last week. Just as the PCA readied to deliver its judgment, Vietnamese state media reported that Chinese ships had sunk Vietnamese fishing boats in disputed waters around the Paracels archipelago — a common complaint in recent years.

What happens next? Earlier this year, Chinese military blogs published plans for Beijing to build up Scarborough Shoal in the same way that Spratly features have been transformed into artifical islands. The U.S., among others, urged China to resist building on Scarborough and no Chinese dredgers were sighted off the coast of the Philippines this spring. But now that the PCA judgment has been awarded so decisively against China, Beijing could well initiate a new South China Sea construction site. At the same time, the Chinese government could declare an “air-defense identification zone” over the South China Sea that would, in theory, compel foreign aircraft to identify themselves while traveling through that airspace. In 2013, Beijing declared a similar ADIZ over waters contested between Japan and China.

In recent months, the U.S. has ramped up the presence of aircraft-carrier strike groups in the South China Sea. American naval craft have carried out freedom-of-navigation exercises near Chinese-controlled outposts that have riled Beijing. Regional groupings — even the consensus-driven Association of Southeast Asian Nations — have been divided by debate over how to react to China’s actions in the waterway. Paul Reichler, who helped lead the Philippine legal team, put Tuesday’s judgment in geopolitical terms. “The tribunal’s ruling not only benefits the Philippines, it also benefits other states bordering the South China Sea like Indonesia, Malaysia and Vietnam,” said Reichler. “If China’s nine-dash line is invalid as to the Philippines, it is equally invalid to those states and, indeed, the rest of the international community.” With such a strong judgment against China, the PCA tribunal may have clarified where international law stands on Beijing’s maritime claims. But it will do nothing to calm the already troubled waters of the South China Sea. 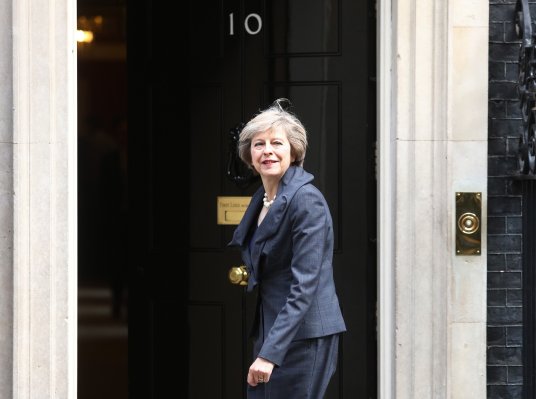 How Theresa May Became Britain's Next Prime Minister
Next Up: Editor's Pick