In this file photo, hospital staff walk past a security guard on duty in a hallway at the Beijing Friendship Hospital during a government supervised media tour on February 29, 2012.
ED JONES—;AFP/Getty Images
By Charlie Campbell / Beijing

Like most people, Chen Zhongwei knew his killer, though not terribly well. The 60-year-old retired dentist had treated him 25 years previously in China’s southern city of Guangzhou. The patient, who had a history of mental illness, became enraged when, all those years later, his teeth began to discolor. Chen was found in his home riddled with stab wounds. The patient killed himself by jumping from Chen’s balcony immediately after the attack.

Chen’s death is an extreme example of a common problem in China: violence against medical professionals. That same day, May 11, three people were arrested in China’s southwestern city of Chongqing after they attacked a doctor with a knife. On May 15, a doctor in Hunan province died after he was struck on the head by the relative of a patient queuing for treatment. On May 23, five doctors were attacked at Dafeng Hospital, also in Guangzhou, where Chen died, by furious relatives of a female patient who had died following a procedure.

The spate of attacks prompted renewed protests and walkouts by medical staff, and outrage across social media, where the Black Ribbon Campaign, in support of Chen and all besieged doctors, garnered 2.5 million page views and over 2,000 comments in its first few days. The authorities promised action. On Friday, the central government ordered armed police to guard hospitals to prevent attacks on doctors, with instructions to “use weapons against potential attackers if necessary.”

“Having more police in hospitals to protect doctors is a sad thing,” says Li Huijuan, a lawyer specializing in medical disputes for the Zhonglun W&D Law Firm. “But it has to be done because there is no alternative at the moment.”

According to a China Hospital Association survey, the average annual number of assaults per hospital rose from 20.6 in 2008 to 27.3 in 2012. China’s National Health and Family Planning Commission (NHFPC) has said attacks have quelled slightly since, while acknowledging that incidences remain all too common. In 2014, 1,425 people were arrested amid 4,599 “security incidents” at Chinese hospitals, reports China’s state news wire Xinhua. A Chinese Medical Doctor Association report in 2015 said almost 60% of medical staff in China had experienced verbal abuse, and around one in seven had been physically assaulted.

“Patients get frustrated when a consultation lasts only a few minutes after they have waited in line for hours,” Chen Penghui, a doctor from Fujian Medical University First Hospital, told Xinhua. “We hope they respect us and understand the pressure we are under.”

But few believe that enough is being done to prevent doctors and nurses from being scapegoated for a broken medical system. China’s 1.3 billion citizens now enjoy — if enjoy is indeed the right word — a form of universal health insurance. However, waits for many hours are often required for outpatient care, and it can sometimes take several weeks to be assigned a hospital bed. Scalpers sell hospital appointment tickets for exorbitant sums. The scope and quality of medical care is generally spotty, and the costs of an emergency medical procedure exorbitantly high, often incurring insurmountable debts. Bribes to doctors are not uncommon to expedite care.

“Stationing police officers is not going to provide a fundamental solution to conflict and tensions between patients and providers,” says Dr. Yanzhong Huang, senior fellow for global health at the New York City–based Council on Foreign Relations. “It’s nothing to do with whether there is protection provided from the police or not.”

In April 2009, China launched a $124 billion healthcare reform plan, with the goal of providing high quality, affordable medical care for the entire population by 2020. However, efforts have failed to fundamentally address key issues of affordability, quality and access. Public hospitals can lack facilities for modern procedures and there remain prohibitive entry barriers for private care. Doctors remain underpaid compared with the other professions, and, coupled with long hours and the threat of violence, medical schools struggle to attract high quality candidates. “Now 90% of the doctors I visit don’t want their children to become doctors,” says Li.

Other than gaps in service provision, conflicts arise from the lack of institutionalized channels to solve disputes, especially in an autocratic society where there are precious few avenues for official redress. In China, those with government grievances must endure a torpid — usually fruitless — tussle with state petition offices to plead their case. As such, those who feel they have a medical grievance frequently turn to yi nao (hospital disturbance) gangs who, for a fee, harass medical staff in pursuit of damages. There is a fundamental lack of trust between the public and those in positions of authority, who are often perceived as venal and self-serving. That perception extends to medical professionals.

“In order to reconcile a quarrel, some hospital managers and government officials indulge villains by paying them money without going through legal procedures,” says Li. “It sets a bad example for the public and damages the rule of law.”

And while stationing police at hospitals may address concerns regarding immediate physical safety, such a stopgap solution could even exacerbate existing problems, Dr. Yanzhong believes.He says that conflating the medical and security professions could result in “mafiazation,” and allow scope for mismanagement or maleficence while hampering the satisfactory resolution of disputes. Already, senior policemen are often appointed to the boards of regional hospitals. “The cozier relationship between the hospitals and police means there’s a big risk of mafiazation of the public power,” he says. And that does neither doctors nor patients much good at all. 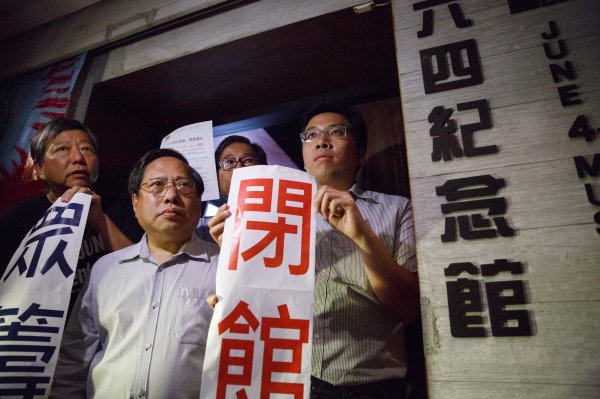 World's Only Museum Dedicated to the 1989 Tiananmen Square Massacre Closes
Next Up: Editor's Pick