The Bachelorette Watch: Gaucho and Chill

As the weeks wind down on The Bachelorette and JoJo Fletcher’s journey to find love leads her ever onward, she continues to glean her herd of the stilted, the stunted and the Chads, leaving only the gelled and tanned men with conspicuously similar hair dos to receive her roses. Only six suitors are left and hometown dates are on the horizon, which means it’s high time for someone to say that things are finally getting really real.

First Date: Alex has not had a one-on-one date this season and is starting to think his feelings for JoJo are an illusion. However unless “illusion” is a synonym for “totally one sided” he is not using the word correctly. Perhaps “delusion” is what he was going for? For their date, Alex and JoJo drive around the Argentinian countryside and eat Pringles while JoJo scoots further and further away from him in the back seat of the car. Luckily they finally arrive at an Estancia or else JoJo would have ended up climbing out of the car window Mad Max style. On the ranch, they dress up as gauchos and ride around on horseback like they’re on the cover of a romance novel, if romantic leads were prone to wearing extra floppy berets. When a real-life gaucho magically convinces a horse to lay down in the grass, Alex and JoJo are invited to spoon the horse, which they do (but thankfully avoid making it a metaphor for marriage). Then they make out on top of the poor horse who really did not sign up for this. (Seriously, does the horse get a SAG card for this malarkey??) Later, Alex tells JoJo he is falling in love with her (even though this is their first real date) and she gets a look in her eye like the horse did when two strangers started kissing on top of him. While normally a make out session on top of a horse would mean a rose, JoJo breaks with tradition and sends Alex home. She has too much respect for him to fake it any longer. Alex musters some dignity and walks out. As JoJo fake cries, even the horse rolls his eyes.

Second Date: Jordan “I Don’t Know What Entitled Means” Rodgers dons his fanciest v-neck for his date with JoJo. They take a limo to a private jet and fly to a vineyard, which is definitely a normal thing you do in real life. Jordan strips off his sweaty socks and they start stomping grapes with their feet, siphon some out, and then chug it. Mmm foot juice just like mom used to make. Then they make out in a hot tub. Later JoJo reminds Jordan of all the fun they had during their date: “I tasted your feet today,” she said. Jordan nods and then breaks down and finally admits that he doesn’t have a relationship with his famous brother. That means that Aaron won’t be making an appearance during the hometown dates (sorry Packers fans and show producers!)

The Bachelorette Milestone: Jordan tells JoJo he loves her. It’s a milestone because Robby a.k.a. Mr. Premature was full of it.

The Group Date: Now that all the men have exactly the same hair cut it’s extremely hard to tell them apart, but three of them are invited on a group date while another one (Luke, maybe?) gets the final one-on-one date. While JoJo and the men were supposed to have yet another outdoor adventure, the weather was so bad that they all had to stay indoors to watch TV (the Brazilian Bachelor, of course) and play games, which mostly involve James Taylor harassing Robby and Robby running around in his underoos. When they finally got bored of doing nothing, JoJo asks her three suitors to declare their feelings and intentions for her. Robby stands by his statement that he’s in love with her, while James Taylor is “very much in the process of falling in love” with her, and Chase, another person who is on this show apparently, is definitely interested in making out with her. Then the men argue about who is the frontrunner, but they are all wrong, because it’s clearly Jordan. JoJo gives the Date Rose to Robby, probably so she can see his Nana scold him for running around in his skivvies on national television.

Third Date: JoJo has no doubt that Luke is a man. She knows this because on their date they go horse back riding and skeet shooting and he teaches her to handle a horse and a gun and gives her some tips for giving hair extra body and lift. Then they make out in a barn, while a horse looks on, grateful that no human is spooning with it.

The Rose Ceremony: Much to the chagrin of a freshly-shorn James Taylor and Chase, JoJo decides to cancel the cocktail party, because she has already made up her mind. Robby already has his rose (which matches his Gryffindor striped tie, and Jordan and Luke are shoo-ins, so Chase and James Taylor are battling it out for the last rose of the night and the hometown date. JoJo gives roses to Luke and Jordan, Chris Harrison earns more money than most of us will ever see in our lifetimes by saying his one line of the evening, “Gentlemen, this is the final rose of the evening.” JoJo hands the rose to Chase. James Taylor softly sings “Sweet Baby James” in the minivan on the way home, cursing himself for shaving his beard. 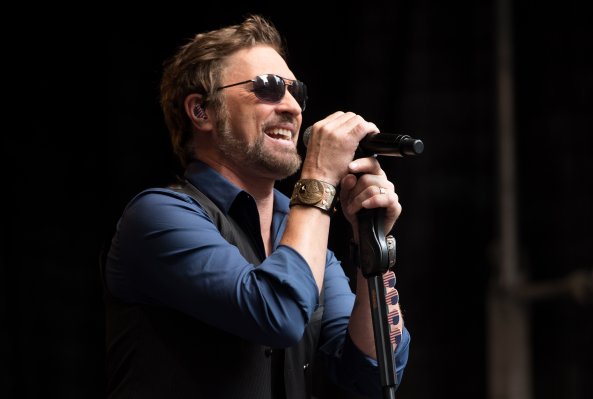