Why We Don't Know Who's Funding the Republican Convention

Scenes from the floor of the 2016 Republican National Convention on Monday, July 18, 2016, in Cleveland.
Landon Nordeman for TIME
By Haley Sweetland Edwards / Cleveland and Chris Wilson

When the Republican National Convention begins in Cleveland on Monday, it will be the first time in four decades that a major political party’s nominating convention is underwritten nearly exclusively with private cash—funneled in from the same billionaires, corporate lobbyists and Super PACs whose influence over politics Trump has enthusiastically lambasted from the stump.

The RNC’s near total dependence on private money is the direct result of a series of recent federal rule changes that eliminated public funding for conventions and made it easier for parties to rake in unlimited sums of private cash, with no extra oversight.

The new rules, which passed with little fanfare in 2014, allow individual mega donors to give ten times more to national parties they they could in 2012. They also fail to close a loophole allowing corporations, lobbying firms, Super PACs, and special interest groups, which are formally prohibited from giving to the parties’ conventions, to give unlimited amounts through special, non-profit committees, which are not bound by normal disclosure rules. As a result, the public won’t find out who the major corporate funders are to either the Republican or Democratic conventions until sometime in the fall.

Meanwhile, on the Democratic side, Hillary Clinton will preside over the first Democratic convention to receive money from both lobbyists and corporations since the party attempted to disavow such donations in 2004, 2008 and 2012.

“It’s a significant change,” Lawrence Noble, general counsel of the Campaign Legal Center, told TIME. “We are at a real crossroads.”

The first major change to the rules governing how conventions are funded came in spring 2014, when a mostly Republican-led effort in Congress successfully eliminated public funding for nominating conventions and redirected that cash to pediatric research.

“It was a cynical move,” Noble said. By making the debate about funding pediatric medicine or funding political conventions, he explained, lawmakers created a false choice—and distracted from the fact that eliminating public grants for conventions was a fairly dramatic move.

Read More: Few Mega Donors Are Ponying Up for the Conventions

The public funding system had been in place since 1974, when lawmakers scrambled to keep political conventions from becoming, or appearing to become, the vehicles of sanctioned bribery. In 1972, the Nixon Administration’s Justice Department had quietly dropped several antitrust charges against a telephone company after that same company wrote a particularly large check to the Republican National Committee’s convention fund, resulting in a major national scandal.

The 1974 Federal Election Campaign Act, or FECA, was passed in an effort to insulate the political parties from such transactions. The law banned unions and corporations from writing checks directly to the parties’ conventions and imposed contribution limits on individual donors, but made up for closing off that firehose of funding by allowing all qualified political parties to receive substantial public grants to defray convention costs.

Over the years, the public funding system slowly unraveled as the size of public grants failed to keep pace with the rapidly rising cost of conventions. In 2004, for example, the RNC and DNC received $15 million each in public funding for their conventions, but by that point, they were spending many times that. In 2004, Republicans shelled out $101 million and the Democrats $72 million. (The 1976 conventions, by contrast, cost about $9 million, in inflation-adjusted dollars.)

Beginning in the 1990s, campaign finance experts say, lawmakers faced a choice. They could increase the amount that the parties received in public funding in an effort to keep up with spending. They could limit how much the parties could spend on their conventions, forcing them to keep the soirees under budget. Or they could get rid of public funding entirely (except for a $100 million per election year grant for security, which has been in place since September 11.) In 2014, Congress chose Option Three.

The decision put the parties in a pickle. If the RNC and DNC couldn’t rely on the $18.3 million they’d received in 2012, they would have to find another way to raise that cash in 2016. Party officials pressed Congress to loosen fundraising requirements, and in December 2014, lawmakers obliged. The rule changes, penned by a bipartisan group of lawmakers, were slipped onto page 1599 of the massive, 1603-page continuing resolution and omnibus bill, known as the Cromnibus, which had to pass to keep most of the government open.

At first, the rule changes didn’t appear to be very significant. Like the old FECA rules, the new rules also formally prohibit the national parties from receiving donations from corporations and unions. And they too required that parties disclose where their donations come from on a quarterly basis.

But the new rules also did nothing to close a massive—and lucrative—loophole in convention finance laws, which parties had been quietly exploiting since the 1980s. Namely: FECA rules apply only to the parties’ official convention committees. They don’t apply to so-called “host committees,” which are nominally independent non-profits, based in the cities where the conventions are held.

“Transparency is not great,” said Richard Skinner, the money-in-politics analyst at the non-partisan Sunlight Foundation. “I’d prefer that disclosure came earlier so people can hold their parties accountable. We need to know that people are obeying the law, and who’s been able to gain access through this process.”

From a public policy perspective, this scenario creates a bit of a ludicrous situation: While Congress and the FEC theoretically govern how political parties’ conventions are funded, in real life, there’s nothing whatsoever keeping corporations, lobbyists, and special interests from donating as much as they’d like, whenever they’d like, with very little transparency.

“The Host Committees really do give corporate America the chance to make political contributions that would otherwise be illegal,” Noble added.

Emily Lauer, a spokeswoman for the Republicans’ Cleveland 2016 Host Committee, told TIME that it has already raised $57 million of its $64 million goal, but said that the committee was not making public the list of the corporate or special interest donors. The RNC’s official convention committee, by contrast, has raised just $7.3 million, according to June Federal Election Commission filings.

Anna Adams-Sarthou, the spokeswoman for the Democrats’ Philadelphia 2016 Host Committee, has cited a similar fundraising goal—upwards of $60 million—but she has also declined to provide specifics. It posted a list of top donors on its website, including Microsoft, Comcast, and AT&T, but has not said how much those companies have given, or whether in-kind donations come with any guarantee of access. The DNC’s official convention committee has raised just $4.6 million.

In the past, big donors have been guaranteed certain access to lawmakers and party power brokers—dinner, wine, a one-to-one chat—in exchange for their generosity. In 2008, for example, the RNC “Corporate Sponsorship Packet” for the Minneapolis-St. Paul convention announced that any donor or corporation that gave more than $1 million (a list that included US Bank, United Health, and Medtronic) would get a private reception with the governor, senator and city mayors.

“You give these large sums and you gain influence with party leaders and office holders,” Noble said. “The party keeps track of who the donors are. They don’t care which fund you’re giving to, you’re still getting credit.”

The Democratic convention, which begins July 25 in Philadelphia and will be governed by all the same official rules as the RNC, marks an even more stark break in rhetoric versus reality. Over the last few years, both President Obama and U.S. Rep. Debbie Wasserman Schultz, the longtime chairwoman of the DNC, have disavowed corporate and lobbyist cash, promising that the 2012 convention would “not accept funds from lobbyists, corporations or political action committees.”

“This will be the first modern political convention funded by the grassroots, funded by the people,” Wasserman-Schultz said. Four years later, the DNC harbors no such pretense.

In the meantime, both parties’ candidates have continued to rail against the “corrupting influence” of corporate, lobbyist, and super-PAC money. Trump, regularly arguing that billionaires’ donations make politicians into “puppets,” has called on all candidates to disavow super PACs for “not only breaking the spirit of the law but the law itself.” In a speech after an endorsement from Vermont Sen. Bernie Sanders on July 12, Clinton promised to “work to get unaccountable money out of politics and the voices of everyday Americans back in.”

With those words still echoing in the public conscience, both Trump and Clinton will now gear up for their respective national conventions, where they enjoy a spectacular carnival of party pride—paid for by precisely those billionaires, lobbyists, corporations and Super PACs whose names we won’t know. 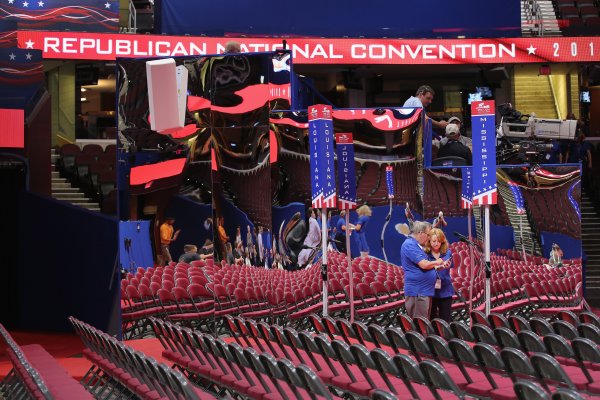 What to Expect This Week at the Republican Convention
Next Up: Editor's Pick