Djuana Franklin weeps at the memorial for the slain police officers killed in an attack in Dallas, Texas, on July 9, 2016.
Marcus Yam—LA Times via Getty Images
Ideas
By Norm Stamper
Stamper is the former chief of the Seattle Police Department and the author of To Protect And to Serve: How To Fix America’s Police.

American policing is in crisis. According to an ongoing Guardian project that tallies deaths caused by law enforcement officers, the police have killed 571 citizens thus far this year in the United States. Of those killed, 136 were African Americans: Alton Sterling and Philando Castile are two of the most recent casualties in what has become a deadly epidemic.

Every day, some part of America experiences their police officers as racist, brutal and trigger-happy: an overly aggressive, militarized enemy of the people. For their part, police officers feel they are under siege, misunderstood, unfairly criticized and scapegoated for society’s ills. And particularly in light of the ambush killings of five Dallas police officers on July 7, we can expect them to become more and more alienated from the people they’ve ben hired to serve.

This kind of polarization is never a good thing. But it’s not new. From the mid-nineteenth century, police departments have been tainted by recurring spams of corruption, brutality, racism and escalating militarism.

Everyone from President Obama to activists to law enforcement leaders have called for institutional change. But in the short term, the news cycle is unforgiving, and in the mid- to long-term, politicians come and go, big-city chiefs rarely last more than three years and activists struggle to keep the public engaged. So “reform” initiatives peter out and evaporate. Unless, of course, the citizens—and, pivotally, the federal government—refuse to let that happen.

There are three major steps we can take to bring about legitimate and lasting reform.

The first is to end this nation’s destructive, immoral drug war. When Richard Nixon famously proclaimed drug abuse “public enemy number one” and declared all-out war on “drugs,” he was in truth declaring war against his own people—most notably young people, poor people, and people of color. Since his announcement in 1971, we have spent $1.3 trillion prosecuting the drug war; incarcerated tens of millions of nonviolent drug offenders, breaking up families and destroying individual lives in the process; and transformed the nation’s domestic peacekeepers into a hostile, occupational force on the streets of America’s neighborhoods. And what do we have to show for it? Drugs are more readily available, at lower prices and higher levels of potency than ever before. Use the billions of dollars saved for prevention, education, treatment.

Second, let’s redefine community policing and reject any definition that does not carve out a powerful, sanctioned leadership role for a city or a county’s citizens. How about a 51-49 partnership with the community as senior partner? Citizens should be involved in all aspects of police operations, from hiring decisions to oversight of police misconduct and lethal-force investigations.

And third, however repellent to devotees of “home rule,” we must establish a meaningful and muscular role for the federal government in local policing. There are roughly 18,000 federal, state, and local law enforcement agencies—but only one constitution. The U.S. Constitution is binding on every cop and every department in the country. Yet, from huge urban centers to tiny rural communities, we continue to witness systemic police abuses of the most basic law of the land.

The Department of Justice, working with local communities, must undertake a comprehensive project to (a) formulate national standards of performance and conduct in all areas of procedural justice, such as stop and frisk, search and seizure, laws of arrest, forfeited assets and use of force; (b) certify all law enforcement officers and agencies (including campus police) that meet these standards; and (c) decertify, for cause, any officer or agency that fails to play by the rules.

The problems of policing are national in scope, constitutional in nature. A combination of grassroots activism and congressional action, aided by reform-minded police executives, sympathetic rank-and-file officers, and local officials, can bring about both true community policing and robust police accountability.

We can’t bring back those Dallas police officers or return Sterling and Castile to their loved ones. Diamond Reynolds’ four-year-old daughter cannot unsee what she witnessed in that car in a quiet St. Paul suburb. But we can demand that justice be served in their killings, and then turn our attention to the urgent business of reconstituting American policing. We have to work hard and together, so that by the time that little girl is in college she can see a law enforcement officer as someone put here to protect and serve her, as someone worthy of her trust. 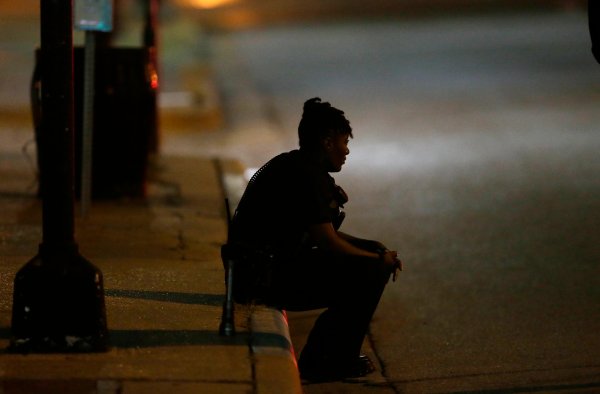 How Cops Cope After Dallas
Next Up: Editor's Pick