How ISIS Defectors Can Help Us Beat Terror

A still image taken on July 28, 2016 from an undated video posted on social media shows two men that the Islamic State said were the attackers of a church in France seated on the ground at an unknown location.
Reuters
Ideas
By Anne Speckhard and Ahmet S. Yayla
Speckhard and Yayla are the authors of ISIS Defectors: Inside Stories of the Terrorist Caliphate

Recent ISIS-inspired attacks, including attacks in Nice and Orlando, are a reminder that ISIS is more than a terrorist group. It’s also an intoxicating brand that sells its ideas of justice, adventure, mission, sex and the opportunity to fight for a utopian society, the so-called ISIS “caliphate.” To those who feel marginalized or discriminated against, or who are concerned about injustices inside and against the Muslim world, ISIS propaganda can be enticing.

Michael Steinbach, executive assistant director for the FBI’s National Security Branch, said in a recent Senate hearing that the challenge for law enforcement is battling ISIS online. There, the volume of ISIS-related propaganda—videos, memes, photos and more—is so overwhelming that it’s difficult to predict who is moving from simply consuming the materials to becoming intent on violence. The Internet allows ISIS-inspired cadres in the West to mobilize quickly—actions can take place in a matter of days versus the weeks, months or even years it had previously taken to radicalize someone into a suicide mission. As Senator Rob Portman, the hearing’s sponsor, succinctly put it: “We are in crisis mode.”

In the face of such messaging, how can the U.S. fight back?

First, we must understand why some Westerners take up the ISIS call. At the International Center for the Study of Violent Extremism, we are in the process of interviewing ISIS defectors. These defectors—from low-level fighters to commanders, wives of fighters, and even young teens—can offer the most authentic voice on the group’s inner workings. So far, we have spoken to 38 defectors from Europe, the Balkans and Syria, who have lived and fought under the so-called caliphate. We hear a repeated theme: all had bought into a dream of justice, utopian ideals and a return to past glory.

But the reality of ISIS, for each of them, turned out to be a horror show. They witnessed children as young as 6-years-old manipulated into carrying out suicide missions in explosive-laden vehicles. They saw hundreds of captive women (including Sunni Muslim women) being doled out to foreign fighters to be abused and raped as sex slaves. They watched widespread corruption, barbarity and brutality against everyday citizens, including public floggings for minor infractions, female enforcers biting other women with metal teeth as a form of punishment, and public beheadings designed to make onlookers pledge allegiance to the group.

It was during these defector interviews that we discovered the most powerful tool against the digital caliphate: the defectors themselves. These former insiders, who have lived inside the “utopian ideal,” saw the group for what it really is, and risked their lives under threat of torture and death if captured, to escape.

Their messages hold the greatest potential to stop those who might consider joining ISIS. We are convinced that we can use these disillusioned voices and feed them back into ISIS-dominated online territory. We have videotaped most of our interviews with defectors and are starting to distribute short videos and memes that look like ISIS propaganda—until would-be homegrown terrorists click them open and hear defectors’ denouncing ISIS and dissuading them from joining.

It’s clear that the West must ramp up its online counterterrorism efforts. We need helplines so family and friends have a safe place to report suspicions of radicalization early on—right now with only the police and FBI to call, it’s no surprise that fewer than half are willing to report on their own family members. We need rapid intervention teams to thwart further movement toward radicalization. And above all, we need a concerted effort to flood the Internet with persuasive messages that offer the truth. 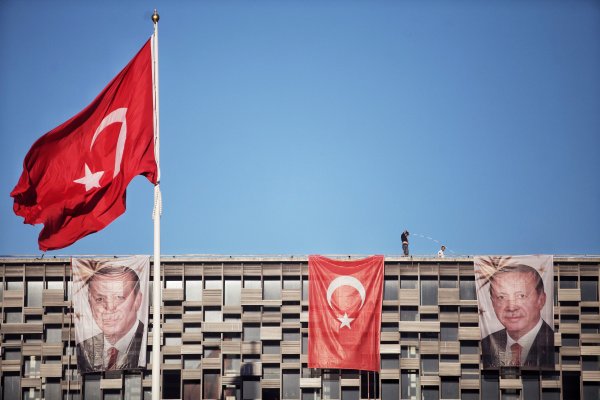 Lessons From an American Mom in Turkey
Next Up: Editor's Pick