Justice Ruth Bader Ginsburg has long been far more outspoken than her colleagues on the Supreme Court, and she is mincing no words when it comes to a certain presumptive Republican nominee for President.

She says her late husband Martin Ginsburg, who died in 2010, would have declared: “Now it’s time for us to move to New Zealand.”

Unsurprisingly, she hinted at whom she would be voting for in another interview with the Associated Press two days ago.

“It’s likely that the next President, whoever she will be, will have a few appointments to make,” she told the AP.

Ginsburg, one of TIME’s 100 Most Influential People last year, also offered a ringing endorsement of Merrick Garland, President Obama’s nominee to the top court following Justice Antonin Scalia’s death earlier this year. She described him as a “superbright and very nice … superprepared” and qualified individual who would make “a great colleague.”

She lamented the Republican-majority Senate’s continued blocking of Garland from consideration, and its insistence that the next President, to be elected in November, should be the one to appoint a new Supreme Court Justice.

“That’s their job,” Ginsburg said, when asked whether the Senate should give the 63-year-old judge a fair hearing. “There’s nothing in the Constitution that says the President stops being President in his last year.”

In the meantime, Ginsburg said the court deadlocked between four liberal justices and four conservative ones “couldn’t have done better than it did.” She hailed, in particular, landmark decisions on affirmative action and abortion — the latter of which she filed a widely acclaimed concurrent brief on.

“I wanted to highlight the point that it was perverse to portray this [the Texas law struck down by the court] as protecting women’s health,” she told the Times. “Desperate women then would be driven to unsafe abortions.” 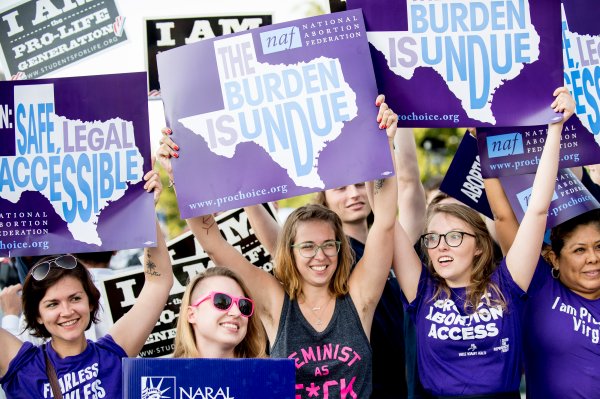