When One Mother Defied America: The Photo That Changed the Civil Rights Movement

The raw videos depict the last moments of Philando Castile‘s and Alton Sterling‘s lives. Widely shared on social media – one of them live – they have shocked an entire nation. Like the videos that showed the killings of Walter L. Scott, Tamir Rice and Eric Garner in 2014 and 2015, they provide the necessary imagery to force us to address, once again, the pervasive and inherent racial inequalities that still exist across the country.

More than 60 years ago, when racial segregation was still the norm in many states, one grieving mother, Mamie Elizabeth Till-Mobley, understood the power of imagery to expose America’s racism.

In August 1955, Emmett Till, a black teenager from Chicago, was visiting relatives in Mississippi when he stopped at Bryant’s Grocery and Meat Market. There he encountered Carolyn Bryant, a white woman. Whether Till really flirted with Bryant or whistled at her isn’t known. But what happened four days later is. Bryant’s husband Roy and his half brother, J.W. Milam, seized the 14-year-old from his great-uncle’s house. The pair then beat Till, shot him, and strung barbed wire and a 75-pound metal fan around his neck and dumped the lifeless body in the Tallahatchie River. A white jury quickly acquitted the men, with one juror saying it had taken so long only because they had to break to drink some pop.

When Till’s mother Mamie came to identify her son, she told the funeral director, “Let the people see what I’ve seen.” She brought him home to Chicago and insisted on an open casket. Tens of thousands filed past Till’s remains, but it was the publication of the searing image photographed by David Jackson and first published in Jet magazine, with a stoic Mamie gazing at her murdered child’s ravaged body, that forced the world to reckon with the brutality of American racism. For almost a century, African Americans were lynched with regularity and impunity. Now, thanks to a mother’s determination to expose the barbarousness of the crime, the public could no longer pretend to ignore what they couldn’t see.

In this video narrated by Bryan Stevenson, an attorney and the executive director of the Equal Justice Initiative, has no doubt: “Without the images,” he says “no one would be prepared to believe the violence we’ve witnessed.”

In revisiting Jackson’s photograph today, he believes, “that image still has resonance, it still has power. I think it still expresses the pain and anguish of a huge part of our population that is still hoping for basic recognition of their humanity.” 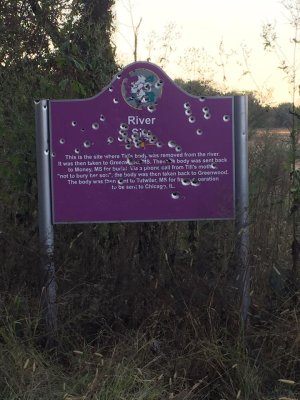 Emmett Till Memorial Sign Was Shot Up by Vandals. Now, People Have Raised $18,000 to Replace It
Next Up: Editor's Pick