Amber Rose Opens Up About Her New Show, Feminism and Why Black Lives Matter

Amber Rose is many things: model, actress, businesswoman and the author of a book appropriately titled, How to Be a Bad Bitch. In recent years, she’s also been recognized for her campaign against slut shaming (she created a SlutWalk to provide an inclusive space free of stigmatized sexuality), her advocacy for women and her ride-or-die friendship with Blac Chyna.

Now, Rose has yet another title to add to the list: talk show host. On Friday, Rose will debut her VHI series, The Amber Rose Show, where she’ll discuss a myriad of topics ranging from sex and dating to pop culture and entrepreneurship. Ahead of the first episode, the sex-positive feminist discussed what the world can expect from her new show, feminism and why black lives matter.

TIME: Why did you start The Amber Rose Show?

Rose: Initially, I didn’t even think about having a talk show, but then I did my SlutWalk and I was like, man, it would be really cool to have a bigger platform to talk about these issues, being really sex positive and unapologetic. Then I did a segment on The Doctors, a whole slut-shaming segment and Dr. Phil saw it and he was like, ‘you need your own show.’ That was almost a year and a half ago and we’ve been working on it ever since. I’m just so excited to have a voice on TV. It’s going to be about sex, relationships, obviously feminism, because I am a feminist. But this show isn’t just for women, it’s for men as well. It’s just fun, there’s a lot of comedy involved as well, we’re going to do funny skits, I’ll interview celebrities.

Speaking of celebrities, who would be your dream guest on the show?

I would really love for Madonna to come on the show. I just love Madonna, she would give me a really great interview, she’s so unapologetic, such a strong woman. The world has always criticized her, but I love how she has just stuck to who she is. It’s really inspiring.

You’re moving into a really male-dominated area, but it feels like you’re doing it on your terms.

That’s the thing – I’m me. I have my own personality. I’m a fan of late night, I’ve always been a fan of late night, I love Conan O’Brien, he’s by far my favorite, I love Jimmy Kimmel, I love Jimmy Fallon, but I also know who I am as a person, and I just wanted to bring my views on life, my perspective to a late night show. I’m going to ask you questions that probably the other late night hosts aren’t going to ask, so you get to see celebrities in a different light on my show.

You’ve spoken extensively on slut shaming and even started a SlutWalk to combat the stigma surrounding women and sexuality. How do you think you’ve changed the dialogue around sex positivity in relation to feminism?

I took all the punches, I took all the hits and I was comfortable with that. I did that for all the women everywhere and I knew what I was getting myself into and I was happy with that and I’m still happy with it. That’s the main reason why I refer to myself as a slut and I’ll get on Instagram and say, “hoes be winning” is because it seems like every time I do something that makes me more successful and no matter how hard I work, people are like, “Oh, you got there because you’re a ho.” People judge the way I dress or they assume that I slept with all these men. So I just embrace it. I feel like so many girls go through that in the world that are not even famous and in high school, college, or just because they’re very comfortable in their sexuality that they’re just having random sex partners every day. That’s not the case sometimes and sometimes it is, but guess what? You can do whatever you want with your body. I’m a big advocate for safe sex and HIV/AIDS awareness, I advocate for the LGBT community, and it’s really just about being who you are and not being apologetic about it. Being slut shamed for being who you are is just not fair. You should live your life to the fullest and do anything and everything that you want and not care about anyone’s opinion.

I think that’s something that people really connect and want to identify with you. You also really value your female friendships, with makeup artist Priscilla Ono and Blac Chyna.

That’s the thing — I love to stick up for women, I love to be the voice for the voiceless. You know, there’s all different kinds of feminists. I don’t hate men; I love men, most of my team are men, and most of my friends are men, actually. So it’s not about having more girlfriends, but it’s about embracing their beauty and other women’s sexuality and going to them and telling them that they’re beautiful and not jumping at the other woman that slept with your man. It’s his fault, it’s not her fault — it’s like we always go towards the other women like we’re supposed to keep our legs closed and not have a sex life, when these guys are just going out and doing whatever they want. Women are very capable of being sexual beings as well. If you can make a lot of female friends, that’s amazing and if you can’t, try not to slut shame or judge each other.

The past few years have had a lot of big projects for you — you started your own SlutWalk, wrote a book and now you have a talk show. What are you looking forward to in the future?

I’m the type of person where I just go with the flow and I’ll just kind of dip and dab into everything that I think I may like or even if I’m not sure, I’ll just try and see if I like it. I didn’t really think I would be into apps and the whole app world, but then I loved it and knew I wanted to do it. I just want to see where life takes me.

Do you have any advice for drafting season?

Yes – like the precursor to cuffing season. You know, you get a nice draft of candidates ready so you can narrow it down for cuffing season and have your winter boo.

Oh yeah, cuffing season! Listen, my best advice is date as many guys as possible. I mean, have at least five on rotation because you want to weigh out your options and you want to figure out who you like the most. So if you have the time to have a different guy take you out, see how he treats you, where he comes from, what’s his background, what does he do, what’s his personality, all the things about him, then you can weigh the options and eventually you’ll find the one by the time cuffing season comes around in September, October.

Seeing the police brutality that’s been so visible in recent weeks with Alton Sterling and Philando Castile, and knowing that this is the world that your son is growing up in, what do you think we can do to ensure that we stop the violence and value the lives of people of color?

I feel like that’s the world that we always lived in, it’s just been brought to light with social media and Facebook Live and things going viral. You know, when people say “All Lives Matter,” yes, all lives do matter. But when you have an entire race saying, “You know when you say All Lives Matter, do you mean Black Lives Matter too?” Because it doesn’t seem like it. It doesn’t seem like it at all. The way that they shot and killed these men this past week was horrifying because that could be anybody’s son. That could have been my son, my uncles. It hits so close to home and that’s why people are so angry because these were good guys. They never hurt anybody, it’s just sad.

Chyna always makes fun of me because she says I’m an overbearing mother, she’ll tell me, “Let him go run, let him go play!” and literally the second that I said, “Okay, I’ll let my son go play over there,” he broke his arm. It’s little stuff like that, you know? Just keep your babies close. Keep your babies very close to you, talk to them every day. Let them know that people are out there and they’re very ignorant and they’re not always going to understand you. I mean, if my son was a teenager right now and he got pulled over, I would sit him down and talk to him and tell him the proper way to go about it. And the f–ked up thing is that it may still not go his way. It’s sad. My heart hurts for their families. It just hits so close to home. Me and my entire household, we just talked about it all day, how sad we were and we cried, just really mourned. It’s in the air today. It’s been in the air all week. 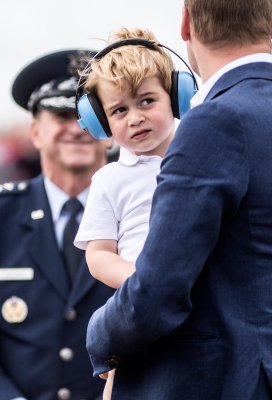